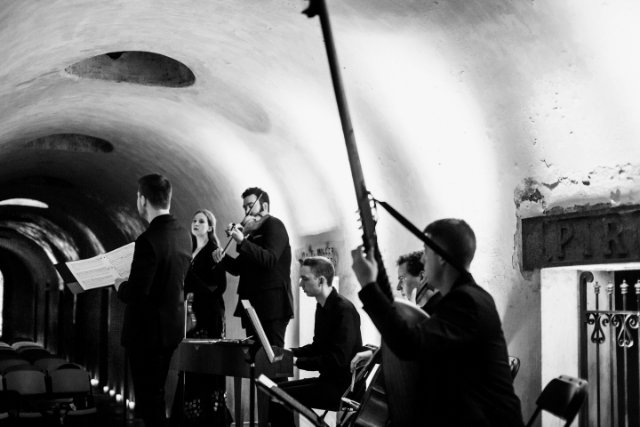 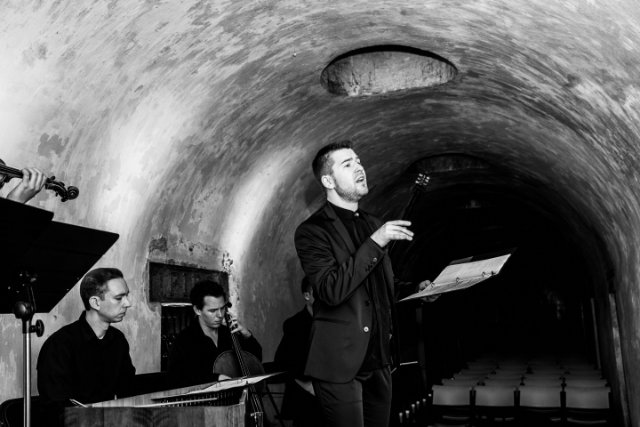 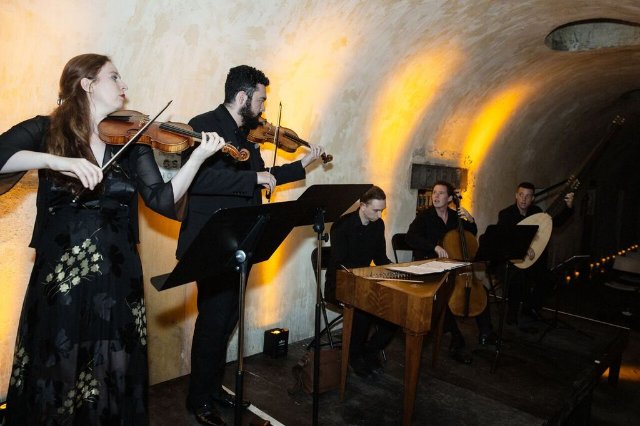 In the golden light of The Catacombs music surrounds the audience 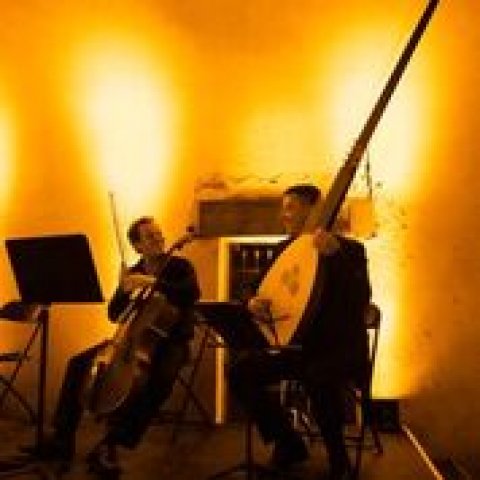 Keiran Cambell on the cello and Adam Cockerham on therobo 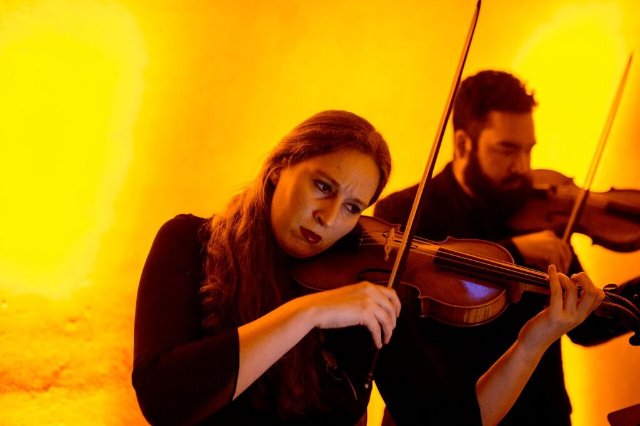 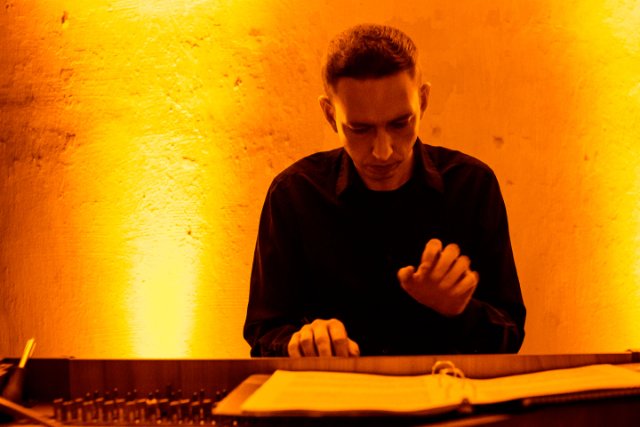 Robert Warner has a delicate, piquant touch on the harpsichord 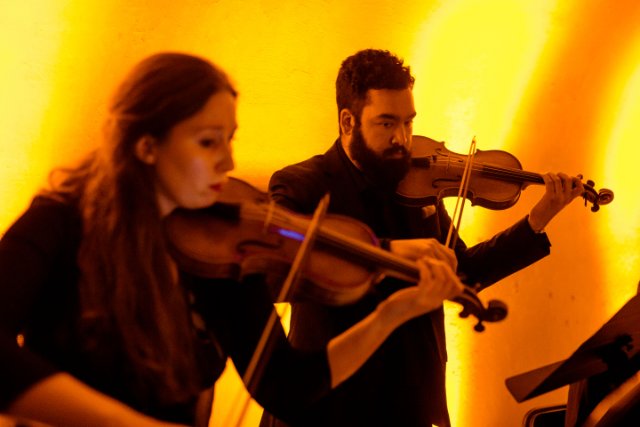 Lodge and Girton continue to surround us with glorious music 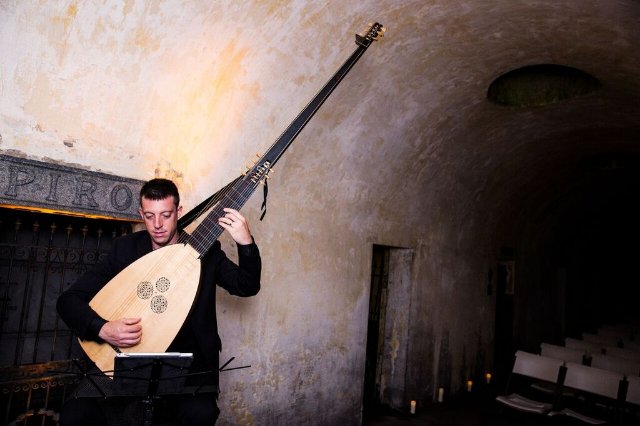 Adam Cockerham and his therobo fill The Catacombs 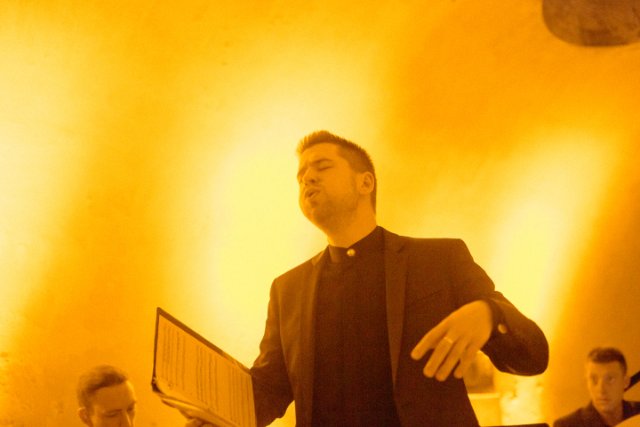 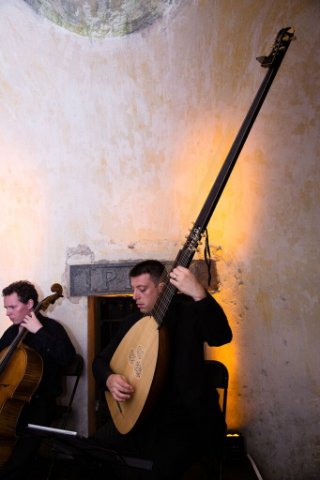 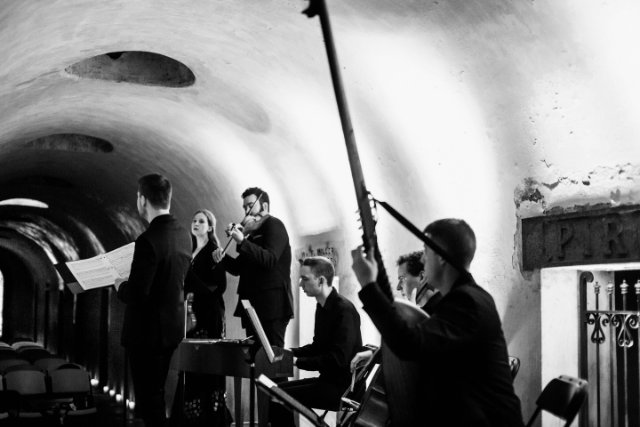 Andrew Ousley has instituted the most exciting and comforting series of concerts in the greater New York area. Using unusual spaces which afford superb acoustics and warming the audience up with excellent whiskeys and cheeses. Followed by moonlit walks under a canopy of glorious first growth trees, an audience might end up in Catacombs. They were first built, because people feared being buried alive. They thought they might have more of a chance to survive if they were buried above ground. Here the stone walls offer a bright and embracing sound. Instrumentalists, singers and the audience all thrill to the reverberations in the domed tunnel of stone.

Angel's Share is offering Epilogues and Epitaphs.  "Historically-informed Baroque chamber music," may sound deadly, but Augusta McKay Lodge and her Voyage Sonique burn through musical tributes to grief and remembrance. The program moves from a solitary Purcell to a more full Corelli Violin Sonata.  Rebel's tribute to his teacher Jean Baptiste Lully, to whom he dedicated his piece, is literally translated "Tomb of Lully".

The formidable counter tenor Daniel Moody joined the ensemble to perform two Handel arias.  In the second, he certainly defined his role on stage, as he sang the title music, "...you elected minister of heaven." Surely Moody is. His voice carries with unusual intensity in this space.

The ensemble went on to the madness of Vivaldi, played with sprightly and orgasmic thrills led by Lodge.

Moody took to the stage at the conclusion to sing Dowland's lovely but sad, "Now, o now, I needs must part."

Augusta Lodge is an important solo violinist, whose instrument often sings with a pure line. This kind of evenness is extremely difficult to achieve on her instrument.  She can create not only mournful melodies, but also harsh angry sounds when needed.  Her partners in Voyage Sonique are equally gifted.

What Ousley has done in selecting The Catacombs venue, and also The Crypt in upper Manhattan, is to treat a new audience to delightful music-making in a room of stone.  Unexpectedly, the stone walls provide cool on a hot day and radiate warmth on a cold one. The Catacombs have a domed roof.  Curved spaces amplify sound dramatically. The space is small, so sound reverberates off the walls quickly.  The audience itself inadvertently joins in by providing ballast which absorbs some sound.  This makes the soundfield bright and very alive, but also resonant. Like caves and cliffside faces, the Catacombs feel natural.  Sound is channeled through the tunnel. Some audience members, as they cheered the performance, were struck by the glory of their own voices. This is a live room built for the dead.  Immersive music sparkles here.

Much music was originally created as liturgy in churches.  We have moved far from that today.  Yet Ousley's notion that in these intimate stone church places you can make music for now is a brilliant one.  Artists enjoy playing in them.  New audiences come on a dare and come back because they have had such a good time.

Ousley draws an unusual audience, often unexposed to classical music. The concerts make converts by presenting top-of-the line performance with a splash of booze and a slice of camembert. No impresario is better at attracting the new audiences classical music needs and seeks.  These concerts provide both excitement and comfort in our parlous times.