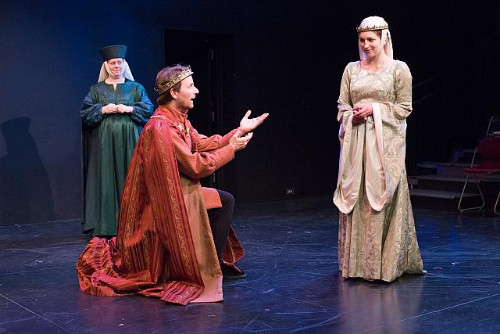 Ryan Wnkles on his knees asking for the hand of Katherine (Caroline Calkins). 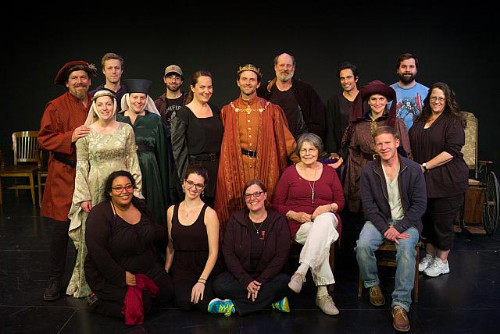 The cast and creative team for Henry V. 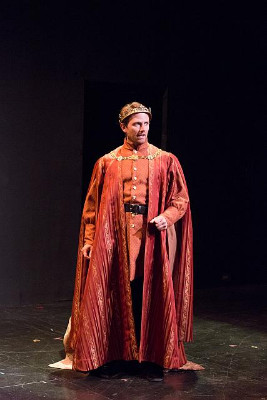 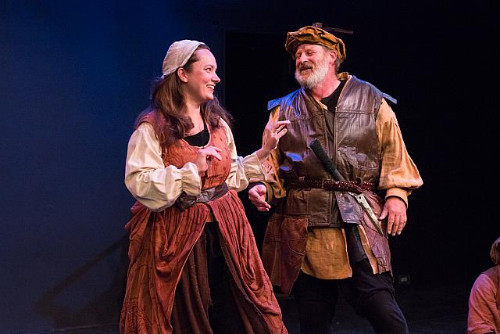 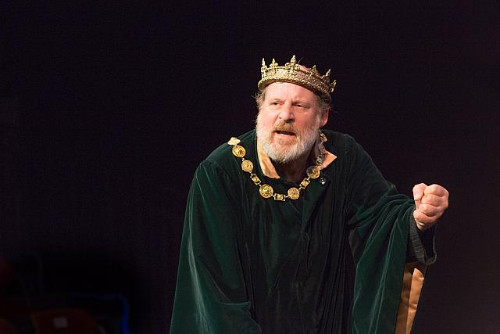 Croy as the King of France. 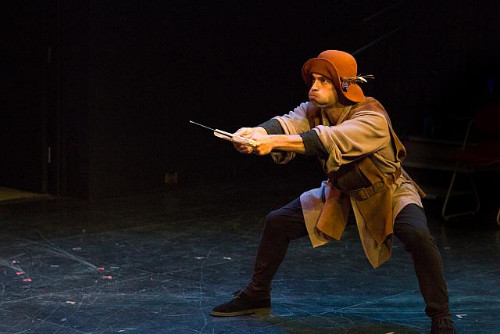 David Joseph as the bounder Nym also played the Dauphin. 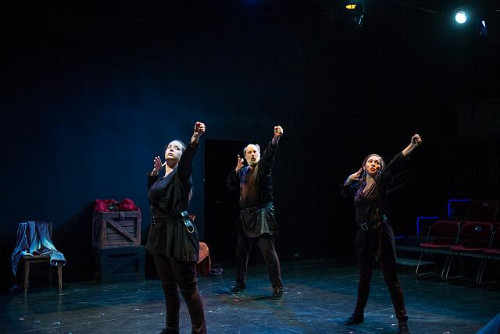 With a lean and mean production, directed by Jenna Ware, Shakespeare & Company yet again has shown its true colors, with a tight as a drum, bare bones version of Henry V. It will alternate in the Elayne P. Bernstein Theatre with The How and the Why through July 26 and after that run solo through August 23.

As one of the most popular of the history plays, for most of the audience last night, the essentials of Henry V were readily familiar. It is so rich in historical detail, twists and turns, betrayals, character reversals, however, that one has to pay very close attention.

As a friend told me during intermission he had “boned up” before attending the play.

Much of the joy of this perennial favorite derives from its diversity of themes, war, anti-war, dynastic claims, rousing patriotic speeches, and tender romance. This historical drama functions on diverse levels.

Motivating his men the former rake now king says “Once more unto the breach, dear friends, once more; Or close the wall up with our English dead. In peace there's nothing so becomes a man As modest stillness.”

Vastly outnumbered and leading sick and exhausted men Westmoreland says to Henry “O that we now had here but one ten thousand of those men in England That do no work to-day!”

That inspired Henry’s great St. Crispin’s Day response “…To do our country loss; and if to live, The fewer men, the greater share of honour. God’s will! I pray thee, wish not one man more.”

During the Battle of Britain while enduring relentless Nazi bombing, the Battle of Agincourt and the St. Crispin’s Day speech of Henry V, was paraphrased by Winston Churchill as “Never in the field of human conflict was so much owed by so many to so few.”

With the current production much is accomplished through a disciplined economy of means. It is usual in S&Co. productions to see bare pipes sets. But this installation goes beyond that with a “no set” approach. Like a conjurer’s smoke and mirrors this is magically conveyed with an imaginative use of generic chairs, clever use of props and evocative costumes.

With the exception of leading man, Ryan Winkles, the stripped down company of three other men and four women play as many as 27 roles. This is even more challenging as the women also take on male personas.

While one may view this as stark and daring it is also historically accurate reflecting the actual circumstances of small companies of (all male) actors touring rural England during Elizabethan times. As S&Co. often states regarding such economy of means that puts all of the emphasis on the magnificence of the language while evoking the vivid imagination of audiences.

That is often the strength and weakness of this company. The ability of the actors to execute this strategy is uneven. It is the ultimate challenge for American actors to master the cadence and poetry of Shakespeare. Too often one responds to actors just reciting the lines rather than conveying them with naturalness and conviction. For British actors this is like mother’s milk. Such was the case when we were fortunate to see Mark Rylance in back to back Broadway productions of Twelfth Night and Richard III.

Some but not all of the actors last night conveyed their roles with that high level of passion and conviction. Part of that may entail the demands of multiple roles and issues of gender. It was evident that the senior actors had more command of the language and cadence.

The other challenge is that this production is both simple and enormously complex. The staging and creation of theatrical illusion demanded incredible precision. There were truly stunning moments when with the flourish of colorful fabrics in a flash chairs became thrones or pews in a chapel.

There was magnificently economical staging of the seminal battle of Agincourt. To the accompaniment of a violin and the whoosing sound of the actors the outmanned British archers, masters of the rapid fire long bow, decimated the flower of French chivalry.

A friend described an earlier production of Henry V at The Mount when an army of soldiers charged through the woods during the battle scene.

In a stunning victory according to Shakespeare the British suffered less than a hundred dead compared to some 10,000 French, the flower of its aristocracy, that grim day on the field of Agincourt. It was one of the most lopsided victories in all of military history.

A more accurate account states that “from the available records ‘at least’ 112 Englishmen died in the fighting (including Edward of Norwich, 2nd Duke of York, a grandson of Edward III), but this excludes the wounded. One widely used estimate puts the English casualties at 450, not an insignificant number in an army of about 8,500, but far fewer than the thousands the French lost, nearly all of whom were killed or captured. Using the lowest French estimate of their own dead of 4,000 would imply a ratio of nearly 9 to 1 in favor of the English, or over 10 to 1 if the prisoners are included. The French sources all give 4,000–10,000 French dead, with up to 1,600 English dead. The lowest ratio in these French sources has the French losing six times more men than the English. The English sources vary between about 1,500 and 11,000 for the French dead, with English dead put at no more than 100.”

When the French attacked the baggage train and killed the boys (Caroline Calkins) that caused an outraged reaction. It is not a part of the play that Henry ordered the execution of French prisoners. He feared a counter attack. When it was clear that he won the day the slaughter ceased.

The success or failure of this play rests on the casting of Henry V. It was a pure joy to see the triumphant and compellingly confident performance of Ryan Winkles. We have long admired his remarkable comedic skills but this was the first time that we appreciated him in a dramatic role.

Clearly Winkles is ready for prime time with a fully developed skill set for the next opportunities in his career. I just hung on every aspect of his deeply nuanced performance. Henry V is one of those great coming of age stories. As Prince Hal he was a cad, wastrel and womanizer. He sought out low life company in pubs and brothels. His great friend was the obese and degenerate Sir John Falstaff.

Now king we see Henry struggling to stabilize his nation after civil war and to recover ancestral claims in France. In comic interludes, rather raucously staged, we see his old pals carousing.

This must have had great appeal to the Elizabethan audiences which comprised all aspects of society including ruffians and wenches. Performances were truly interactive including heckling of actors.

It is a metaphor that Henry must unite these rough characters into an army of warriors. There is the notion of citizen soldiers. With stunning brilliance Shakespeare has the young king in disguise mingling with the common troops on the night before the battle. Asked for his identity the challenged King answers that he is Henry Leroy. That got one of the best laughs of the night. The Bard uses this interlude to convey the toll that war takes on the common man.

Having triumphed in the field there is a shift to a love story. As a part of the truce Henry demands the hand of the Princess Katherine. She is well played by Caroline Calkins. In particular we were impressed by her fluid command of French and comic attempts to learn some English from her lady in waiting Alice (Jennie M. Jadow). There was a charming interaction of two women exploring the giddy prospect of being wooed by the English King.

There was a nice touch as Katherine learns some basic words such as hand, fingers, arm and elbow. More importantly regarding anatomical parts, the coy Katherine in the manner of a French lady, brings the King who would wed her to his knees. The chemistry between Winkles and Calkins was utterly enchanting.

As the blustering Pistol, and then a switch to the elderly and ill French king, the veteran Jonathan Croy was in full command. In a variety of roles Tom Jaeger displayed great naturalness and depth. Both as the brawling lowlife Nym and the arrogant, too silly Dauphin, David Joseph delighted the audience with many comical details.

The strategy for the King of England to marry a French princess assured peace. The union produced one son Henry VI. Just nine months after his birth he was anointed king when Henry V died on 1 September 1422. His mother was then just 20.

A few weeks later, on 21 October 1422, he became titular King of France upon his grandfather Charles VI's death in accordance with the Treaty of Troyes of 1420.

In one of the last lines of the play it is revealed that Henry VI lost all that his father had accomplished. It hints at the next cycle of plays Henry VI, Parts One through Three. This entails the Wars of the Roses which started with Henry VI. The king suffered periods of insanity and his wife, Margaret of Anjou, assumed control which contributed to the king’s downfall, the collapse of the House of Lancaster, and the rise of the House of York.

It was the plan of former artistic director, Tony Simotes, to present the complete cycle of History Plays. That now sadly ends with the current production of Henry V.

It is always a delight to see this iconic play and yet again come away with fresh and enticing insights.