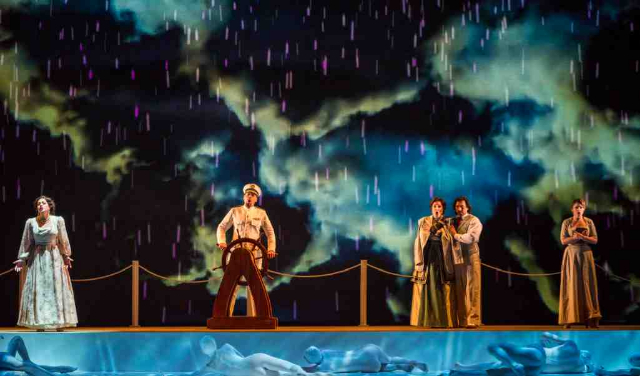 A storm disrupts the journey and drives the Amazon dancers away 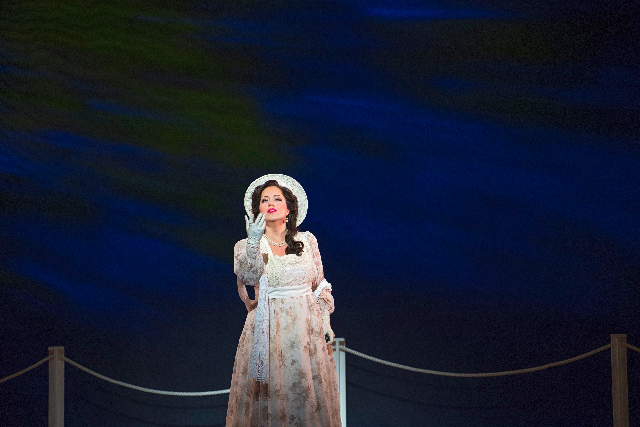 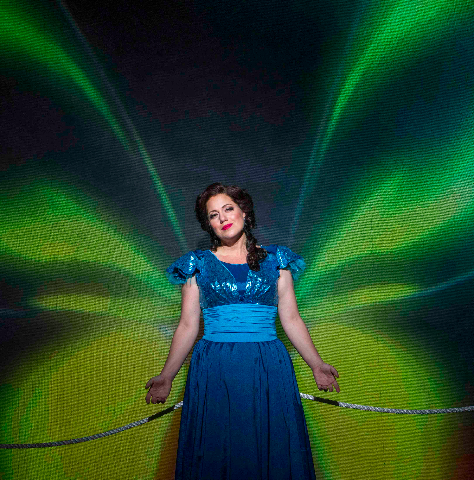 The New York City Opera returns packing a wallop with its production of Daniel Catán’s Florencia en el Amazonas. Not only is the piece an homage to Gabriel Garcia Marquez, the great Latin writer, but it is also an homage to Richard Strauss and his celebration of the human voice over poetry in Capriccio and the power of love and music in Ariadne auf Naxos.

Here the lead character is memorably lofted by Elizabeth Caballero, whose lush and colored soprano reminds us also of Puccini, although the butterflies in this opera are hopeful and bode well for the future of singing.

The work was originally commissioned by the Houston Grand Opera, Los Angeles Opera and Seattle Opera.  It has been one of the most successful modern mountings. Like Marquez' musings, it would remiss to decry the passionate plea for love.   After all for Sigmund Freud it was work and love, love and work. That's all there is.

Florencia Grimaldi, a worldwide opera star, has returned to the Amazon where her internal emotional life, stimulated by an early love affair, enabled her superb singing career.

Incognito, she is traveling down the river in a boat, like Marquez’ enduring lovers, to perform in Manaus.   Accompanying her are a couple who have lost their passion for each other, and hope to revive it by listening to Florencia sing. A young journalist is writing a book on Florencia and hopes to meet her. There are several members of the crew.

Two aspects of the production are particularly noteworthy. From the moment the dancers of Ballet Hispanica's brilliant B team enter the bottom frame of the set, a river bottom, it is difficult to take your eyes off them. Playing in the river’s bed in body-tight white costumes which make the dancers appear nude, they dance, crouch, grasp and pray throughout the opera and are transfixing. Sometimes the evocative lighting makes them appear mottled and at others, crystalline. From time to time they become actors. After a storm, they disappear. The gossamer quality of the opera is immeasurably enhanced by these dancing ‘Amazons.’

The Amazon rain forest passes before our eyes on video as the boat travels toward Manaus, the central city of Amazonas. From the moment the river boat launches in the first Act, we are treated to the video forest-side whirling by, mile after mile. The set then becomes three-tiered, with the river’s channel and the Amazons dancing at the base, the boat’s deck and a rail in mid-zone, and the scenery whizzing by in the back. Because there is so much motion, the singers can stand relatively still and deliver their arias and duets without worrying about stage directions. Focus on their exceptional voices pays off.

The NYCO orchestra under Dean Williamson celebrates Catán’s music with carefully shaped phrasing, wonderful brass blasts and the suggestive sounds of the forest.  They support the singers and fill Rose Theatre when they are left to their own devices.

John Hoomes, who directed the Nashville Opera's production of the opera, makes it live here.  With the addition of dancers and videos, the entire experience is sensual -- auditory, visual and emotional.  We can eagerly look forward to the next season with the new NYCO under Michael Capasso.