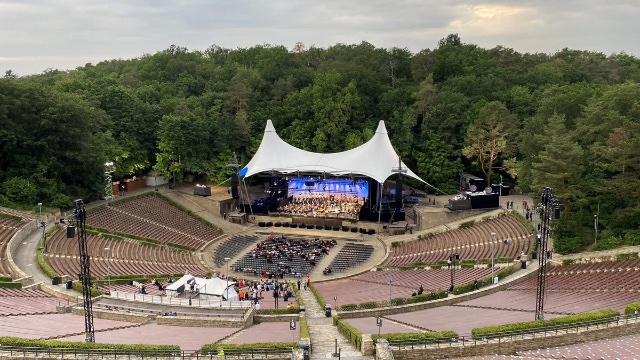 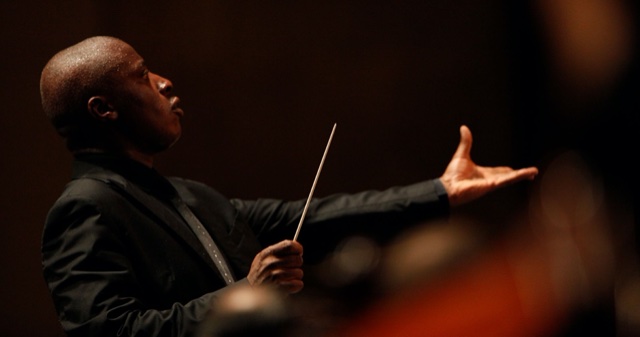 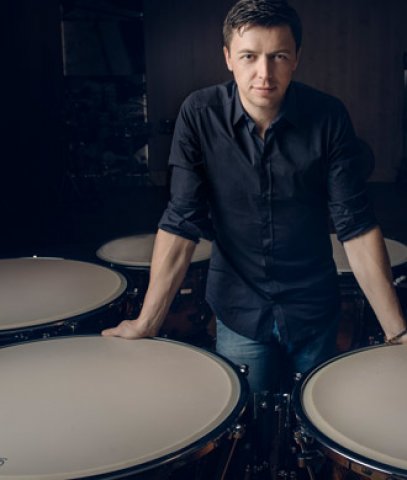 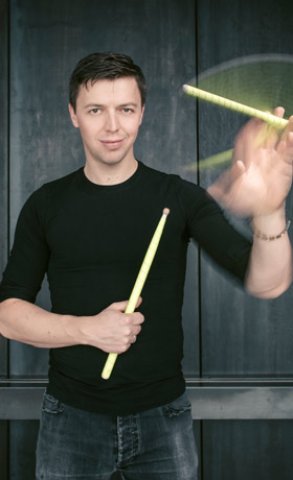 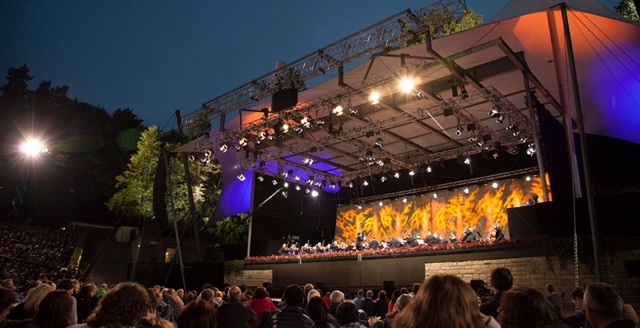 Gershwin, Bernstein and John Williams were featured on a program re-introducing the Berlin Philharmonic live to their live audience. Wayne Marshall conducted, and performed the Rhapsody in Blue. Martin Grobinger,  a  percussionist, was featured in a John Williams’ The Special Edition.

Marshall is making his debut conducting the Philharmonic, although he has already performed with the orchestra several times as a pianist under the direction of Sir Simon Rattle. He brought charm and verve to music he has loved since childhood. He also gave a detailed and thrilling account of the Rhapsody in Blue on piano, showing the risqué side of the work, the rage of its time when first performed. The clarinet trill which opens the piece slid happily into a glissando. The brass section shares the piece with the piano and was swinging along.  The back of the stage was swathed  in blue, enhancing this rendition.

Martin Grobinger and The Percussive Planet Ensemble, in tight black T-shirts ready for action, performed the Williams Special Edition. With the exception of the pitched percussion instruments which occasionally play melody lines (or the timpani occasionally supporting the bass), the percussion section is used for accents, fills and flair. There are no driving ostinato patterns or drum-set like beats.  Accents are the seasoning for important rhythmic moments. There is always a pulse. The division of the beat  is in at least one instrument most of the time.

A driving energy bubbles beneath the changes above.  When pulse is missing, the music is suspended, just before a big section.  Grobinger displays percussion accents and splashes of motion and color.  Even when the melody takes a breath, you listen to the fill.  Marching forward, we are both interested and excited. A million ideas fly around all the time. Yet the melody is apparent because instruments play it in the upper registers.  Complex textures are always driving underneath.  Not that members of the Berlin Philharmonic will succumb to monotony in whole notes, but they are few and far between here, and keep the instrumentalists playing with energy and passion.

The Waldbühne is one of the world’s great outdoor venues.  Built on the grounds of the 1936 Olympics where Jesse Owens first wore the sneakers made by the Dassler Brothers and won, (setting off Adidas and Puma), the Waldbühne is in a depression that encouraged a duplication of ancient Greek ampitheaters.  The acoustics are superb.

No one kicked when they had a bar code Covid test to make sure the venue was safe. We were seated comfortably. No face masks required once the vaccination/test ensured safety.

The evening opened with Bernstein’s On the Town, dipped into Williams, then on to Gershwin and round again to Bernstein, with the On the Waterfront Suite and the overture from Candide.

A rip roaring conclusion had the audience clapping.  Cell phone lights waved in the air like lightning bugs.  It was a celebratory occasion, the kind that great musical performances offer.

In Berlin, seeing a black conductor seemed, not a gratuitous gesture, but rather the perfect choice of the music Marshall knows well and loves. The new artistic manager for Young Concert Artists has observed that we don’t want to put people on the stage who can’t meet the mark. Johnson does and then some. He and the orchestra grooved on the beat. The French horn and harp were singled out for special contributions.

The 1936 Olympics for which this complex was built are a reminder of how successful the Germans have been in overcoming deep societal problems. The 1936 Games succeeded as a form of propaganda, spotlighting the Nazi Party as welcoming and orderly even as it was on the precipice of launching another war and other atrocities.

This beautiful musical venue, an easy S Bahn ride from Mitte Berlin, has replaced the Leni Riefenstahl  images with something healing and helpful. Only Paul Lincke's Berliner Luft is left singing our ears as thousands of lights dot the evening air.

Performances of the Berlin Philharmnonic are available here. As the world’s premiere orchestra, it is well worth subscribing from anywhere across the globe.