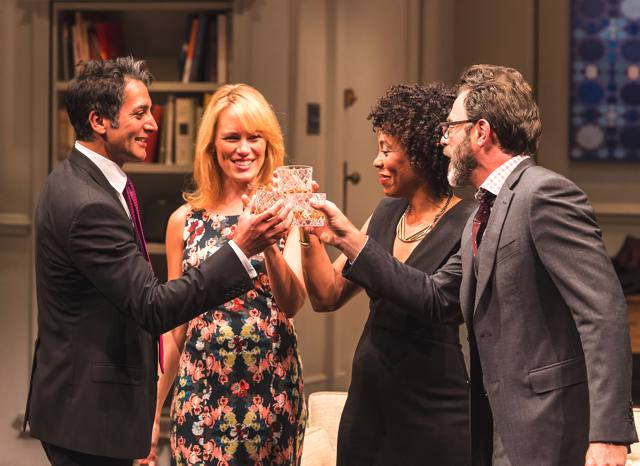 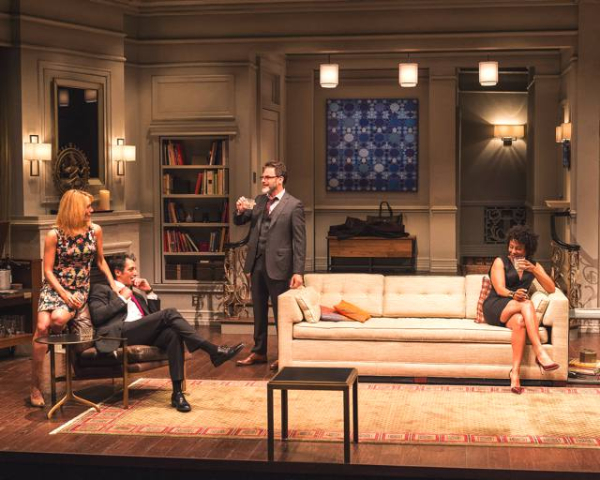 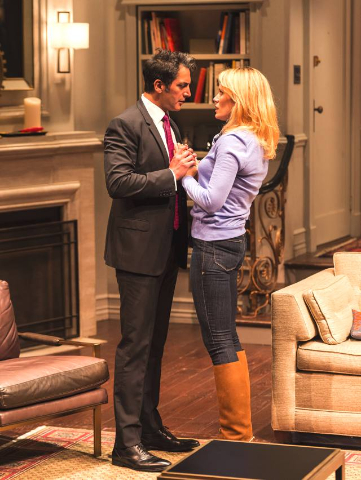 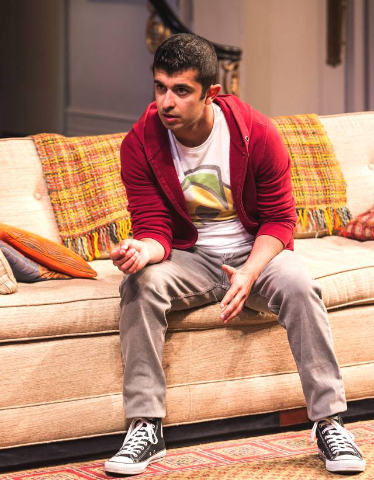 One can get away with a lot when the weapon of biting social discourse is comedy. Remember, ‘God of Carnage’? Yazmina Reza’s four seemingly-intelligent adults meet to sort out a schoolyard incident involving their young sons, only to have the meeting explode into hand-hand combat when a casual remark sets off a firestorm of recriminations.

In playwright Ayad Akhtar’s blistering comedy, “Disgraced” he explores the dark underbelly of the politically correct subject matter of anti-semitism and Islamophobia that is simmering just beneath the surface at first only to boil over later on, dragging its five characters into open verbal warfare.

“Disgraced”, directed by journeywoman (see; politically correct) director Kimberly Senior, first premiered in 2011 in Chicago, then transferred to New York’s Lincoln Center, then onto Broadway capturing a Pulitzer Prize for Akhtar and a Tony nomination for director Senior in the process.

The play written in 2012 is eerily prescient for events unfolding in 2016. The action is set in New York City during 2011 and 2012 takes place over a nine month period.

Pakistani-American lawyer Amir (Hari Dhillon) at the urging of his American painter wife Emily (Emily Swallow) reluctantly agrees to offer ‘assistance’ to a local Imam who has run afoul of the law for comments he made about the “9/11” attacks. Emily has come to know the Imam while gathering research into Islamic art for a series of her paintings she will be showing at a fashionable art gallery.

At a hosted dinner party for friends Issac (J. Anthony Crane) a curator friend of Emily and Amir – has more than a business interest in Emily – and his wife Jory (Karen Pittman) who works at the same law firm as Amir settle in for an evening of cocktails, pleasantries and a delicious dinner prepared by Emily. After consuming too much alcohol the conversation turns to office business talk and then to the hot button issues of the day: politics, religion, and whatever other alcohol-fueled deep feelings held by all, begin to surface during the inevitable moments of truth.

Amir, a self-proclaimed apostate from Islam makes a case for secularism saying” The Koran is like one long hate-mail letter to humanity”. Which prompts Isaac to calm the waters with a sincere assessment saying “Islam is rich and universal (as viewed through his curator lenses), part of a spiritual heritage we can all draw from.” Amir then admits “… to having felt some pride on September 11th.” Which produces gasps from the audience. Now the stage is set for the infidelity slings and arrows when Amir and Jory returning from an errand, find Isaac and Emily in a close encounter.

The play may be full of predictable clichés and the direction of the story, but no one can deny the talent and solid performances of the actors working on the stage. Sometimes the situations get overcooked with everyone yelling. But, after all there are a lot of truths being hurled all about, with each character making a case for his or her position.

There is one last character that demands our attention. Abe Jensen played by Behzad Dabu, is an angry young man. Abe is Amir’s nephew who in an effort to assimilate, changes his name from Muslim to Anglo. Further frustration and disappointments prompt him, however, to change it back again at the end of the play. He gets to summarize, at least for me, the driving ideology and role Islam plays in the overall scheme of things on this planet. The ending of the play is deliberately left ambiguous, however, I felt an uneasy, gnawing feeling that there is more in store for the characters and for a secular society as we know it.

In the technical department, director Senior leads her creative team headed by Scenic Designer John Lee Beatty who fashions an attractive one-set New York City apartment, with costumes designed by Jennifer Von Mayrhauser, Light Design by Christine A. Binder, and Sound design by Jill BC Du Boff. The Fight Direction choreographed by Unkledave’s Fight House, is one of the best fight design efforts is so authentically executed, I had some concern for Ms. Swallow’s safety. But, of course, I shouldn’t have worried.

“Disgraced” is a powerful play that delivers a potent message, yet is funny and enjoyable at the same time. It is performed without an intermission at the Mark Taper Forum through July 17, 2016.