Hitler on the Roof by Akvavit Theatre

Two Hander by Rhea Leman Has American Premiere in Chicago 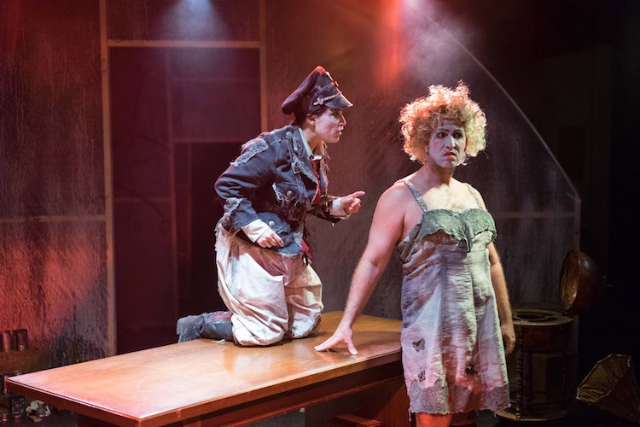 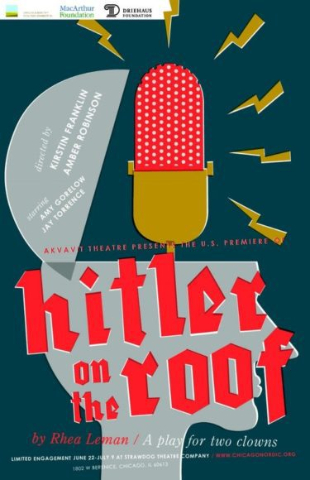 Hitler on the Roof,  I was happy to learn, is not a parody of Fiddler with Hitler playing Tevye. No, it’s a tragicomedy subtitled “A Play for Two Clowns.” The setting is today, deep in the Fuehrerbunker where Adolf Hitler spent his final days. While it offers some comic lines, it’s ultimately tension-filled and horrifying.

Akvavit Theatre is staging the U.S. premiere of this 2013 Danish play by Rhea Leman, updated a bit to 2017. It doesn’t need much updating. According to the producers, the play “is a timely reminder of the consequences of selling lies as truth and propaganda as art,” written during a 2011 rise in Danish nationalism. The language of Joseph Goebbels’ propaganda rules and his support for the Third Reich ring some current alarms.

The play’s premise is that Goebbels is producing a program on RFG (Radio Free Goebbels) to communicate the purpose and values of Nazism for today’s youth. Gorelow, a small but antic performer, opens the radio show after dragging the broadcast desk out of its storage space. During the long opening segment, Goebbels dances, performs acrobatics, sings and leads the audience in a singalong.

He reminisces as the play opens: “70 years these four walls have contained my body, my thoughts, my memories, 70 years of being alone, of being in solitude with only the potent company of my Fuehrer, of our Hitler, only the image of our father and my children, has kept me sane.”

And later: “My misfortune has made me mature, but has not robbed me of my character. Germany is still the land of loyalty and my loyalty will always be with our Fuehrer who I feel is in me–” (A soft banging is heard from above.)

The play uses actual film footage from Goebbels’ family and  sound recordings of Goebbels’ children. Children’s cries are heard from time to time and Goebbels comforts a baby doll.

Goebbels begins a diatribe about what he did and how he did it as Nazi propaganda minister, responsible for communications, art and culture. He plays a ukulele made of a tin can and a broomstick, sings and gets the audience to sing along with him to “I’ve Got the Whole World in My Hands.” It’s a manic vaudeville-style performance.

He points out, “Don’t forget. We were elected. The people were ready.” And “Propaganda only works if people are ready to hear it. ….

After Riefenstahl (Torrence in a strappy dress and blonde curls) arrives to guest on the radio show, they discuss her role as Hitler’s filmmaker. Footage of marching troops and saluting supporters from Triumph of the Will, her film of the Nazi party congress at Nuremberg, is screened across a wall of the Fuehrerbunker.

“Everything changed after the war,” Leni complains, and notes all the Hollywood filmmakers who made millions from Nazi-themed movies such as Casablanca, Sophie’s Choice and “that Anne Frank’s diary.” Mel Brooks gets a shoutout for his “Springtime for Hitler” show within a show in The Producers.

Together they dance a cozy “Happy Days Are Here Again,” under a tin can disco ball.

Riefenstahl remembers meeting Hitler for the first time. “It was if the earth opened up before me, as if the hemisphere suddenly split down the middle and out of it erupted an enormous waterspout, so powerful that it touched the sky and shook the earth. We were a collapsing Empire, on our last leg and our Fuehrer came and picked us up.”

Somehow Hitler has become an object of humor in popular culture. Perhaps that’s the way we deal with the reality of horror. (His fellow dictators Mussolini, Franco and Stalin haven’t received the same treatment.)

How else explain to the success of The Producers’ “Springtime for Hitler”—or this collection of faux or real Hollywood homages to the Fuehrer?

How else to explain the array of YouTube parodies on a single scene from the 2004 film Downfall (Der Untergang) about the final days of the Third Reich? The great Swiss-born actor Bruno Ganz plays Hitler in a scene of anger and frustration, which has been parodied in thousands of ways, many described by the Guardian.

(Everyone who knows me will guess that my favorite is Hitler’s First Springsteen Show.)

Playwright Rhea Leman, a native New Yorker, has lived and worked in since 1981. Her work concentrates on serious subjects treated in humorous or satiric ways. Her opera, The Rosenbergs, was chosen as best opera of 2015 and her play Gorilla, about the global financial crisis, gained her a nomination for best playwright of 2013.

Hitler on the Roof  by Akvavit Theatre (95 minutes, no intermission) continues through July 9 at the new Strawdog Theatre, 1802 W. Berenice (home of the late Signal Ensemble Theatre). Performances are Thursday-Sunday with $25 tickets online. Student tickets are $15. Get to the theater early to see Akvavit’s Fuehrerbunker model and photos of Goebbels, his family, and other historic figures.