Come From Away at La Jolla Playhouse

By Irene Sankoff and David Hein 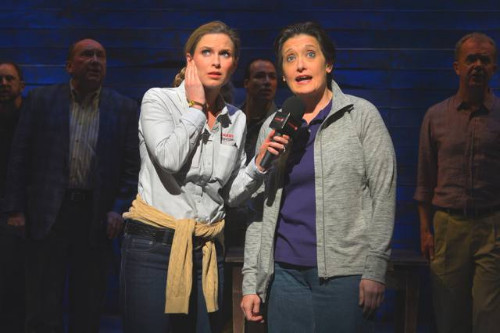 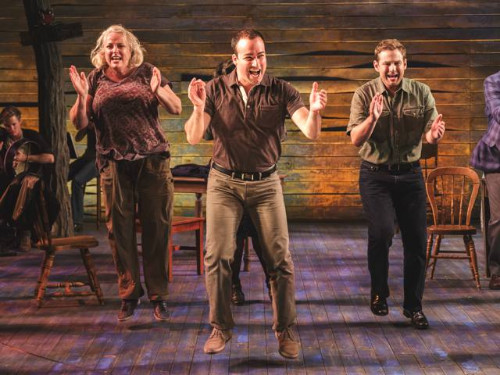 One never knows where the next small exquisite gem of a play or musical will come from. Story ideas are all around us just waiting to be discovered by talented and creative people. Whenever the La Jolla Playhouse Artistic Director Christopher Ashley, gets wind of a new and fresh project, it’s a pretty safe bet that Playhouse audiences are going to be in for a special treat.

The musical “Come From Away” by the Canadian husband-and wife team of Irene Sankoff and David Hein, directed by Ashley made its World Premiere debut at the Sheila and Hughes Poitier Theatre last weekend to thunderous applause and standing ovations.

Big things often have small beginnings. For America, nothing was bigger and more horrifying than the Terrorist attacks of September 11, 2001. It’s been a defining moment in modern American history. How to expiate the demons of that day and its immediate aftermath, hasn’t really been addressed by many American writers yet. The scars are too deep. Yet, there are stories to be told. And some no doubt with unexpected or a particular point of view.

In “Come From Away”, the story informs the audience in song, dance, and narrative about the generosity and compassion of our Canadian neighbors north of the of the 45th parallel. When the first-ever national “ground stop” of all aviation in US airspace took place, 38 jetliners were diverted to Gander, Newfoundland, along with 7000 passengers from countries all over the world; sitting for five days in an airport that most probably never heard of.

How a city that sported two policemen, a small fire department, one library, a one person SPCA unit, and a no-nonsense mayor who galvanizes the town residents into becoming the most hospitable and compassionate of hosts is the stuff that becomes a legend over time.

Director Chris Ashley has a penchant and a winning track record in sending La Jolla Playhouse productions on to, not only Broadway (“Memphis”, “Peter and the Starcatchers”, “Jersey Boys” etc.), but onto Regional stages around the country as well.

One of the most interesting aspects of this unique production is that the show is chock full of adult singer-actors; many of a certain age. One also gets the feeling of Canadian verisimilitude the minute the curtain goes up. The song “Welcome to Newfoundland” gives one insight into the warm and winning character of our Canadian “cousins”.

The splendid ensemble cast of twelve performers, who portray multiple characters, immediately lay out the story plot in their musical intro’s and dialogue exchanges. Toe-tapping, Celtic-infused musical accompaniment from the eight-person onstage orchestra led by musical director and conductor Ian Eisendrath is a plus in helping to propel the somber backstory toward an uplifting conclusion employing the healing elements that come at times with humor.

Such musical numbers as “Stop the World”, “Somewhere in the Middle of Nowhere” and the finale by Hatch and the company is proof that our society, despite its uglier sides and moments, just might be worth saving after all.

“Come From Away” performs at the La Jolla Playhouse Potiker Theatre and runs through July 12, 2015.