Taking Nature Back Inside 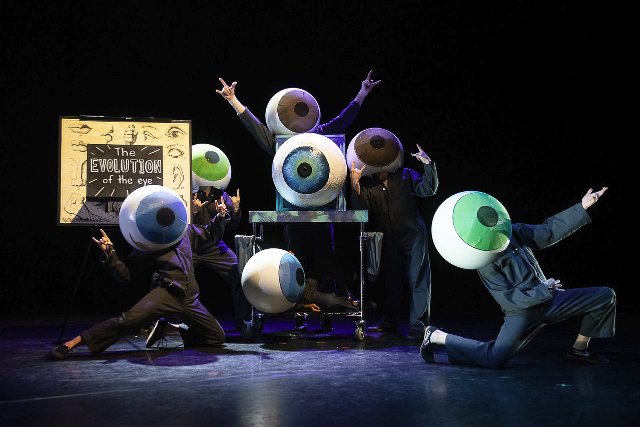 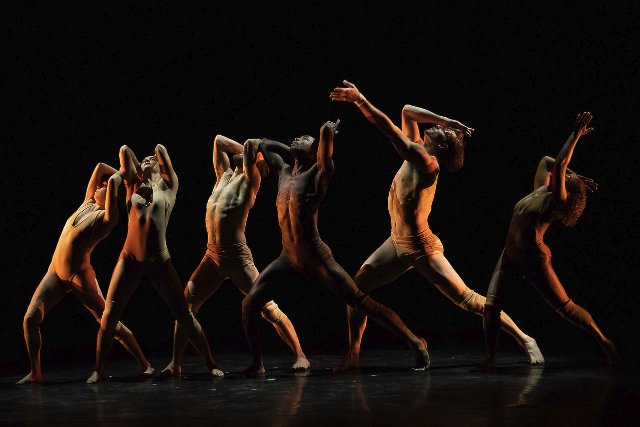 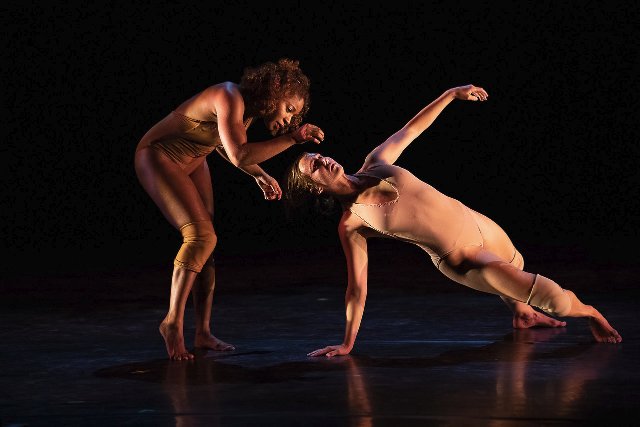 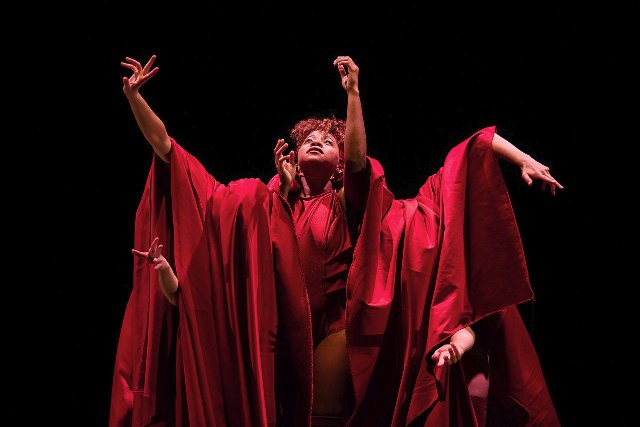 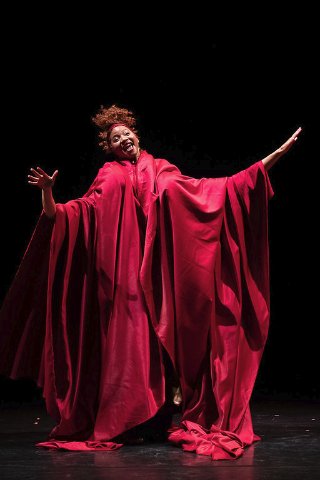 Three Dartmouth athletes-Moses Pendelton, Jonathan Wolken and Steve Johnson- took Allison Chase’s dance composition class. They had no prior training in dance. That allowed them a freedom for invention, combining aspects of gymnastics and athleticism with the serious fun that signifies Pilobolus.

It was founded in 1971 and made its Jacob’s Pillow debut a couple of years later where it has been featured at intervals ever since. The company has gone through many iterations and now has created some 400 pieces.

For the occasion of Pillow’s 85th season, last year they were commissioned to create a nature inspired piece “Branches.” It premiered with the bucolic twilight setting of the free Inside Out stage. Routinely there are no sets for bare stage performances with natural light.

Returning this year they brought nature inside on the stage of the intimate, rustic, Ted Shawn Theatre. The Jacob’s Pillow Dance Festival always evokes a woodsy, summer camp ambiance. That is never more apt than with the playful approach of Piloblus. They have so much fun with their work.

It’s an aspect that alerts audiences that Pilobolus is uniquely different from most other companies. That subtle difference is a significant aspect of its creative mandate.

When asked, many in the audience indicated that they had seen “Branches” last season. It  underscored that Pilobolus has a dedicated fan base at Pillow. Given the variety of programming it is a company that can be enjoyed year-after-year.

Part of that derives from programming not based on the singular vision of a marquee choreographer or artistic director. The work is collaborative with both originators of an idea and input from its dancers.

Last year’s work “Branches” was brought back inside. It was the final work of a two part, five piece program.

Notes for “Branches” conveys the typical approach of collective collaboration. It states that it was created by Renee Jaworski and Matt Kent, the artistic directors of the company, in collaboration with Itamar Kubovy and Mark Fucik. Additional collaborators include Antoine Banks-Sullivan, Nathaniel Buschbaum, Krystal Butler, Isabella Diaz, Heather Favretto and Jacob Michael Warren.

That means that an astonishing ten choreographers and dancers worked to create “Branches.” That become evident as the work unfolds with many vignettes and sub themes folded into the dominating agenda of movement inspired by nature.

It means that dancers are not limited to performing. They are encouraged to develop ideas and put their stamp and persona on the legacy of the company.

Recalling seeing Pilobolus over the years one readily recognized its DNA but with the realization of how it has evolved and remained fresh. Just when you think that you know what Pilobolus is about, with a tool kit and vetted skill set, they do something different. You are challenged to revise and update assumptions as an audience or critic.

It was an amusing way to meet the company. Seven dancers wore large, globe-like head pieces simulating enormous eyes with removable parts. The notion was a class room with a lesson on how the eye evolved over millions of years from simple organisms to the human eye.

The teacher in this classroom is a member of the audience recruited before the show. We met Twink who delightfully participated zestfully performing instructions whispered to her. She is a surrogate who maximizes our own participation in and appreciation of the piece.

With the cue of a Tinkerbell like sound she showed us a series of cards set up on an easel. The messages were video projected onto a white screen. There were also videos which instructed us on the evolution of simple, ancient and primitive organism.

The upbeat participation of the volunteer was so flawless that it seemed like she was a well rehearsed member of the company. In one sequence, when there was movment to a disco beat, she shook her booty as the audience roared in approval.

“Gnomen” for four men evoked the Pilobolus approach that I was familiar with. They started by rolling about as a solid mass of bodies and limbs. Wearing skin toned trunks we were particularly astonished by the enormous, finely toned, physical presence of Jason Michael Warren. The other men suspended and swung him in a swimming mode. This movement was passed along in turn to the other dancers. There were lifts but not in the manner of classical dance. It is typical that Pilobolus draws on diverse ideas and traditions.

The piece entailed aspects of male dominance, machismo and hand-to-hand fighting. In one aspect three men form a group. The odd man out, defeated or shunned, skulks and lurks about. In a humiliated, crouching posture he circles around and sheepishly rejoins the group.

The almost nude bodies and contact with the floor left dangerous wetness. There was an inventive video projection as a distraction above several stage hands who mopped up the floor. Video and similar work marked intervals between other dances. Initially, one felt that the drying process might evolve as a piece.

Originally, Pilobolus was a company of male dancers. A new work “Warp and Weft,” for me the most exquisite and serene of  the program, featured three women; Krystal Butler, Heather Favretto and Casey Howes. The costume design by Marion Tatlan, with the dancers in red satin leotards, two with matching caps, and an enormous, versatile swath of the same material, was uniquely integral to the concept of the dance.

There were many astonishing variations of what to do with that red cloth. During one element it was draped to give the illusion of one very large woman. Initially, the other two women were concealed and then their presence was “discovered” in an amusing manner. This was a wonderful way to experience the impact and contributions of women as more than romantic partners of male dancers.

That, howeve, was how Favretto was seen when partnered with Warren in “Symbiosis.” Here sound and light were key elements. On a dark stage they are suddenly illuminated in strong white light to the sound of cracking thunder. They are in hunched over mode on the floor from which they awaken and are activated as well as return to.

The partnering suggests romance but there was a sense of alientation and formalist separation. Instead of a precoital mating game it was more about tentative attempts to approach and overcome estrangement. The partnering, including her stepping and standing on him, evoked failures to communicate. This was noted by rejecting retreats to prenatal positions that were seen at the beginning of the dance. Significantly, it ended suddenly and without apparent resolution. That appeared to stun the audience into a freeze frame.

The evening ended with the joyously upbeat and bucolic “Branches.” With bird and nature sounds it evoked the initial iteration of being created and performed in a natural setting.

A large, angular, projection of light was readily perceived as water and a pond. A dancer tentatively touched a toe into it. There  was a familiar gesture as we test the temperature. She soon plunged in and splashed about joined by the six frolicking other dancers. The dance evolved into many variations of summer revels.

There was a very different approach to curtain calls. They had been so careful to mop and dry the floor. Now they came out and poured buckets of water creating a layer across the stage. Like a back yard water slide one by one they zoomed across with wild exuberance. With a provocative twist the women were topless.

OMG! What an incredible finale to a great evening. Yet again the amazing Pilobolus was just wonderful.