Mysterious Circumstances at the Geffen Playhouse 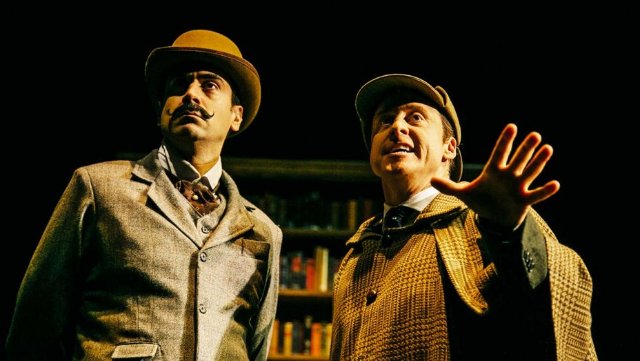 Sherlock Holmes, the world’s greatest fictitious private consulting detective sprang from the fertile brain of English writer Arthur Conan Doyle in 1887. Two years later he was knighted becoming the darling of London society and a literary icon in the English-speaking world. Conan Doyle by today’s standards became the equivalent of a Rock Star back in the Victorian era of England.

He created the brilliant, but quirky, sleuth Sherlock Holmes, who along with his friend and biographer Dr. John Watson, solved the thorniest of mysteries employing Holmes’ extraordinary powers of observation coupled with forensic science and the logic of deduction.  Scotland Yard  scoffed at first but never-the-less welcomed his analysis of the crime scene when the police hired him to consult on especially tough cases.

So convincing was Conan Doyle’s creation at the turn of the 20th century both Holmes and Watson were believed to be real people.  So much so that the city of London actually turned Holmes’ fictional living quarters at 221- B Baker Street into a physical replica in a building located at 221-B Baker Street; due to the demand of tourists wanting to visit the famous detective’s home.

The London County Council wisely obliged by recreating the Holmes and Watson apartment as described in Conan Doyle’s stories down to the last detail; turning a tidy profit in the process over the years  The story may be apocryphal but when I lived for three years in London in the early ‘50’s. I was often asked where it was located.  Maybe that’s where Walt Disney got the idea for Disneyland and America’s love affair with nostalgia. But I digress.

Playwright Michael Mitnick was inspired by the 2004 New Yorker magazine article “Mysterious Circumstances: The strange death of a Sherlock Holmes fanatic” by David Grann.   Speculation ran high as to what caused the death of Richard Lancelyn Green, considered the world’s largest collector of Sherlock Holmes memorabilia and a recognized scholar on all thing Holmesian.  Green was found dead from asphyxiation on the floor his London apartment in 2004. The police could not establish any foul play, yet they have kept the “Richard Lancelyn Green” file open as of this date.

The Geffen’s producing artistic director Matt Shakman, in collaboration with playwright Mitnick, has crafted a play-with-in-a-play format employing a fictitious narrative concerning the mysterious death of a real person.  It’s not easy to pull off one of the theatre’s long standing conventions: the play-within-a-play format.  Non-linear plays place larger expectations on audiences, thanks to shorter attention spans these days.

Also, it doesn’t help that focusing on the ‘story’ now must compete with projection designs and other technical wiz bang components that make up todays’ productions.

The cast under the deft direction of Matt Shakman is universally solid.  Seven actors portray multiple roles based on true events that occurred in two different time periods in London; 1894 and 2004.  However, quick scene changes, lightning fast changes both in costume and new identities amid sometime brief scenes has the feel of a TV episode rather than a theatre presentation.

Alan Tudyk portrays Sherlock Holmes in the back story scenes and as Richard Lancelyn Green in the 21st century time period.  As Sherlock Holmes he brings the brusque, superior confidence and assurance that one expects from “Sherlock Holmes”.  As Green we see a more measured individual, scholarly at times but obsessed with the life of Sherlock’s creator, Sir Arthur Conan Doyle. It’s nicely done.

Ramiz Monsef as Dr. Watson, brings a fresh approach as the crime-solving partner and friend of Holmes.  Other stand outs include Helen Saddler as Touie, Dame Jean and others, Hugo Armstrong, portrays the American, plus multiple characters, Austin Durant as Conan Doyle,  plays Chief Investigator, and others, Leo Marks portrays Superintendent, Private Eye, Dentist and others, and John Bobek as Chester, and other roles complete this stellar cast.

Mitnick’s writing for me is the weakest part of the production.  I know it’s picky but details do matter. For example, it’s a bit jarring and anachronistic to hear a Brit describe a time period as ‘two weeks’, rather than the more commonly used expression “fortnight”, especially in the Victorian-era scenes.

The creative team led by director Shakman almost unbalances his production with too many technical touches: projection designs, directorial choices in staging the production from a richly textured set design created by Brett J. Banakis, to the outstanding and spot-on costume designs of E.B. Brooks. The Lighting design by Elizabeth Harper lends authenticity to both time periods. The Projection Designs are by Kaitlyn Pietras.

I still remember Mr. Shakman’s impressive production and direction of the comedy “Bad Jews” at the Geffen in June of 2015.  Now, he is the artistic director of the Geffen and I believe he is the best choice to lead the theatre.  Besides no one hits a home run every time at bat.

“Mysterious Circumstances” is an intriguing puzzle worthy of a case that even Sherlock Holmes himself would probably enjoy, were he to be called upon to assist in helping Scotland Yard solve the mysterious death of Richard Lancelyn Green.