Faerie Festival in Adams to Return in 2017 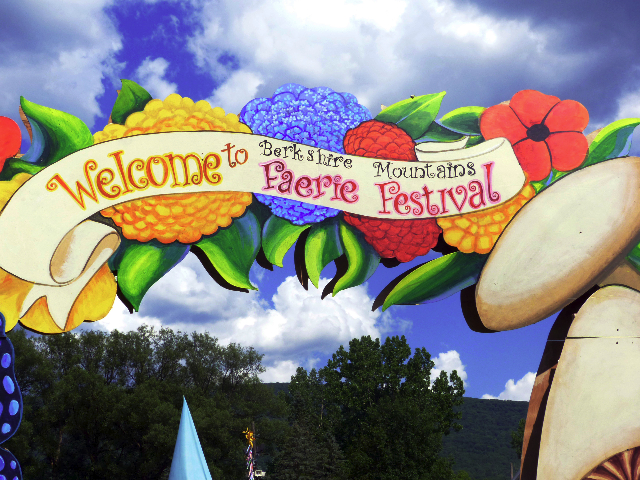 Welcome to the Faerie Festival. 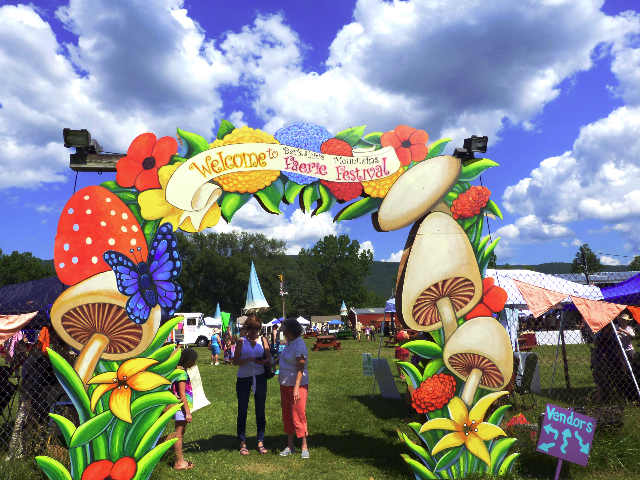 These props will be stored for next year. 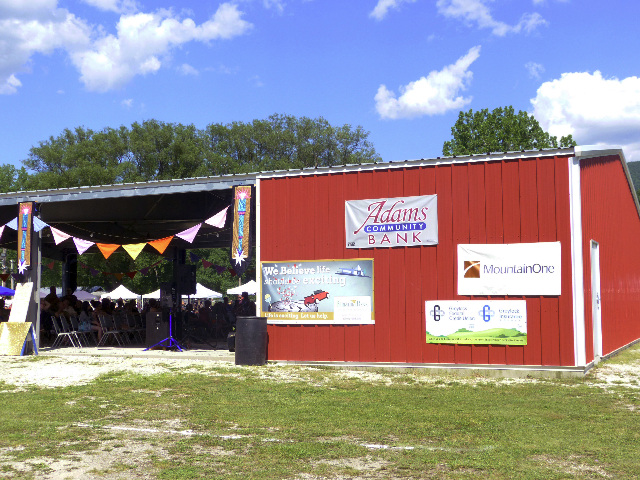 There were lots of activities in the shed. 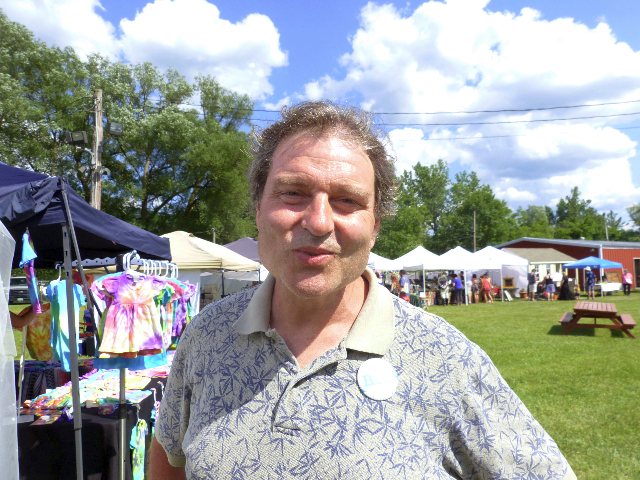 Bill Reilly grew up in Adams and is a scene painter for the Met Opera. 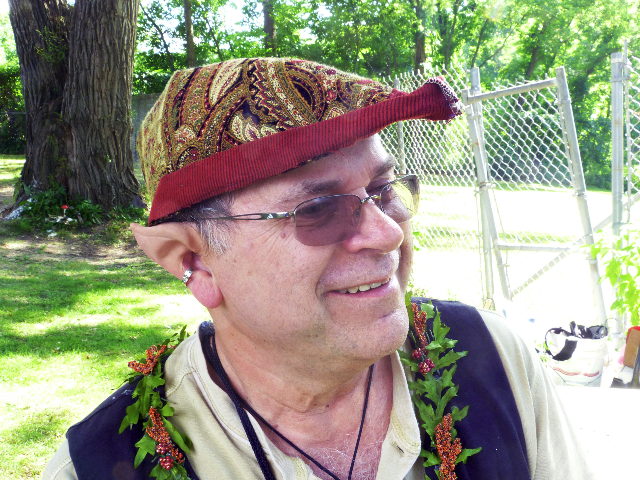 Potter Phil Sellers had a blast as an elf. 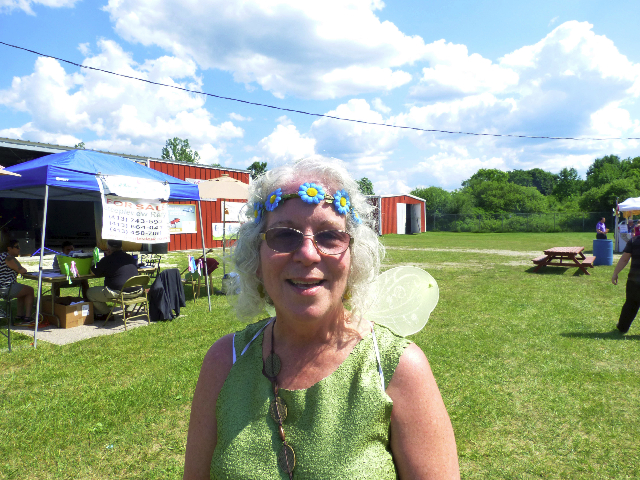 Artist Francie Reilly is a bundle of creative energy. 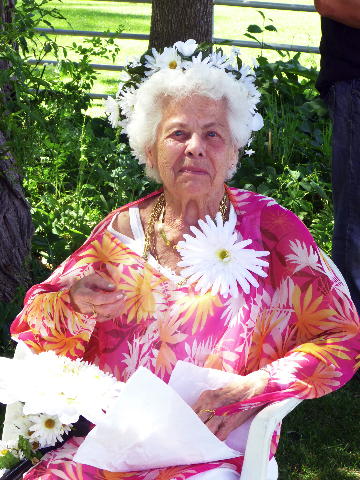 The matriach of the Kolis clan is a treasure trove of local lore. 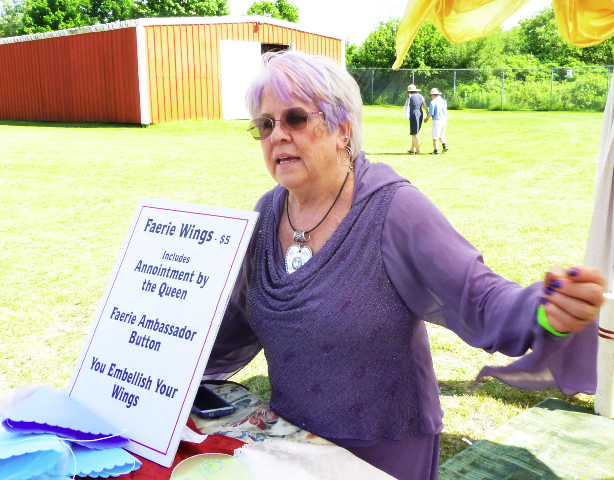 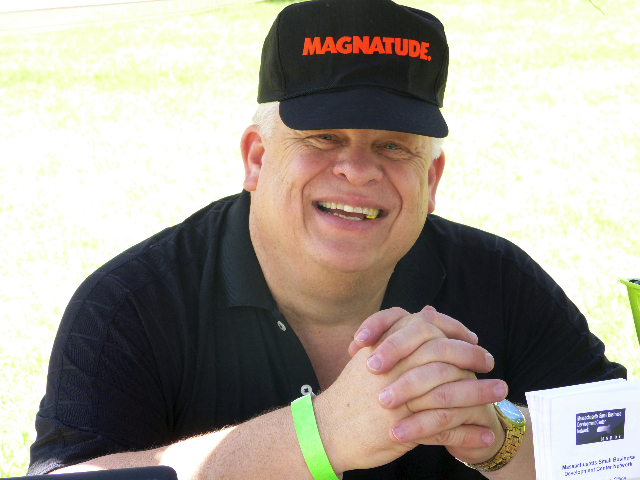 Bill Kolis is an attorney and Adams booster. 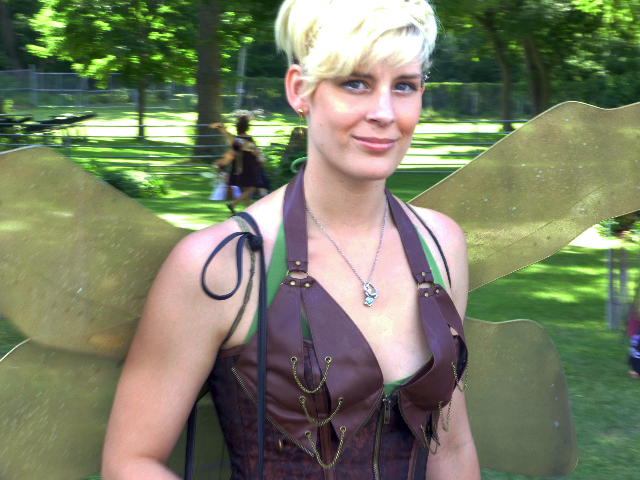 This Faerie and her pals spent nine hours at the festival.

With perfect summer weather, in the shadow of Mt. Greylock the highest peak in Massachusetts, a group of local artists launched the Berkshire Mountains Faerie Festival in Adams.

The one day event, which will be expanded to a weekend next year, met all of its targeted goals. There were some 2,000 who attended at a cost of just $5 with kids admitted for free.

Additional revenue came from  45 vendors offering a range of unique crafts to food. Of these 43 have pledged to return with just two taking a wait and see approach.

The idea for the Faerie Festival was hatched in the dead of winter by a dynamic group of artists and entrepreneurs.  Their ambition has been to put Adams on the map as a community for the arts.

From out of nowhere what seemed like a visionary, long-shot idea has taken off like a wizard on a broomstick.

The Harry Potter author J.K. Rowling has announced that her latest venture “Ilvermorny School of Witchcraft and Wizardry” takes place on Mt. Greylock.

It is the location for an American incarnation of Hogwarts.

This has sparked global interest in Mt. Greylock which has languished for decades with multiple failed schemes for its development.

Town officials, with this out-of-the-blue incentive, are calling for proposals for the development of a campground potentially funded at the level of $40 million for Greylock Glen.

This falls in line with enormous museum and resort development plans which have been initiated in nearby North Adams. In December, accompanied by former Governors, Mike Dukakis and Bill Weld, former Guggenheim Museum director, Tom Krens, announced plans for a for profit museum and related projects. MASS MoCA is undergoing its final phase of development.

It has long been noted that development money that has been spent in North Adams and Williamstown, focused on MASS MoCA and the expansion of the Clark Art Institute, has not yet trickled down to benefit its bucolic neighbor.

Considering the adjacent communities is a matter of scale and emphasis.

While North Adams is dominated by MASS MoCA and MCLA there has been a struggle for the many artists who have settled in The Eclipse Mill and other lofts and residences to forge a viable presence.

Adams has a similar mix of former industrial mills and churches. A core of energized activists are having a more direct and significant impact on shaping its future.

For Adams progress is being made by a grass roots movement while North Adams development is in the hands of heavy hitters and politicians.

We have been privy to the ongoing activity and dialogue during weekly gatherings at Sushi House in North Adams.

Last night we engaged in a lively dialogue with several of the organizers of the Faerie Festival.

A commonality is deep roots in Adams. The former Simmons Furniture store in the heart of Adams closed after generations in business. It is now occupied as a residence by Bill and Francie Reilly. He is the son of the former owner. They met as students in  a theatre and scenic design program. Currently they are renovating the former furniture store with plans to create a fine arts gallery to display their own work and that of local artists.

This past year they and others have created fine arts windows in the town's storefronts. To raise money from local businesses the group fabricated fanciful faerie doors.

Gail and Phil Sellers are potters who live and work in the Eclipse Mill. Phil had a blast as an Elf during the festival. She grew up in Adams as a member of the Kolis family. They are activists who head Art About Town in North Adams.

Her attorney brother, Bill Kolis, who commutes from Ohio bought a downtown building. For a time he operated The Firehouse a bar and eatery. He has put a lot of his legal and business acumen behind the wheel to push for development in the community.

The sculptor George LeMaitre and his wife Pat sold their farm in Nevada and have been developing a factory building in Adams as their home and studio.

For months, starting in the dead of winter, we were given updates on the progress of the Faerie Festival.

Bill is a now semi-retired scene painter for the  Metropolitan Opera. He and George designed and constructed many of colorful signs and props for the festival. This included banners for both sides of a truck near the road leading to the festival.

Arriving at the parking lot visitors were enticed in by a fanciful gate painted with mushrooms and strawberries as well as a bold logo.

Because Bill and George both have vast space in their residences these props will be stored and just need a bit of touch up next year.

After dinner, with a twinkle, Francie who is amazingly clever and resourceful, revealed that she planned to do a bit of dumpster-diving at a local industrial laundry.

"Did you notice the pennants and banners,” she asked me with a twinkle? “They are made from napkins and table cloths they throw out. If there are stains or wear and tear they get tossed. We need more and hope next year to completely surround the site.”

During our visit we noted that there were lots of activities for kids from face painting to story telling, hula-hooping, and a masterful puppet show.

But this was an event for all ages.

Yesterday, while shopping at Big Y,  I recognized one of the clerks  and asked if she had been a Faerie? The very attractive twenty-something responded enthusiastically.

“It was fantastic” she said reporting that she and her friends had spent some nine hours at the event including the evening bonfire.

"We were exhausted” Francie said. “So Bill and I stayed until they lit the bonfire but left after that.”

While we were able to visit only briefly because of a theatre commitment in Stockbridge there was truly lots of  fun for children of all ages. This included a shed with a stage for musical entertainment.

The organizers will make a report to town officials next week. No final figures were ready when we spoke but the event passed its first year in the black.

They were elated by an above the fold story on the front page of the Sunday Berkshire Eagle.

Moving forward that level of publicity and media support will be crucial.

Recalling last winter Francie commented that the initial idea of a Faerie Festival was somewhat whimsical. Then she went on line and discovered that Faeries are Huge.

Building on the initial success, and now factoring in the excitement about Rowling and Mt. Greylock, there are unlimited possibilities for the future.

Already plans are underway. The event is slotted for the week in June before Wilco returns to MASS MoCA.

“They rent the fairgrounds for camping” Francie said “And the week after is Fourth of July weekend. It will be a two day event next year and we have great momentum for a bigger and better festival.”

Chiming in the artist Ann Ross speculated “Imagine what happens if Rowling inspires a movie set on Mt. Greylock?”

Think Woodstock with all those Faeries and Wizards flittering through once sleepy Adams. What fun!

Report on the festival by Astrid Hiemer.