At Potrero Stage in San Francisco 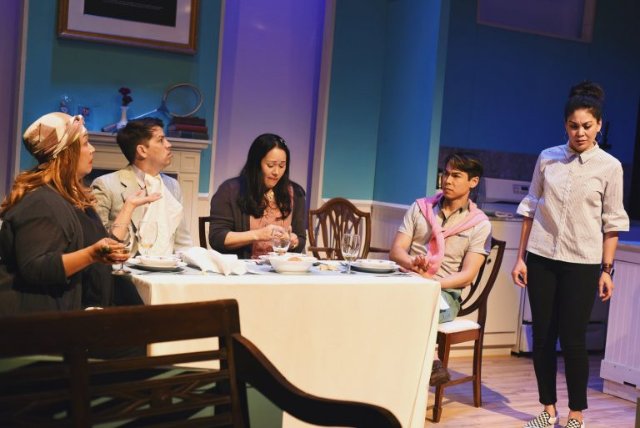 Take one part Southern Gothic melodrama; mix in an equal measure of Hollywood stardom ethos; and set the action in the playground of New York’s rich and famous – the Hamptons. Turn the spoof meter up to campy, and what do you get? Leah Nanako Winkler’s laugh-a-minute world premiere, Two Mile Hollow. So if you like the movie Soapdish or the TV series Soap, or farces in general, this will appeal.

But in addition to the slapstick surface, playwright Leah Nanako Winkler calls on her own Asian-American and Kentucky roots to fashion a layer of social issues about class, gender, and race that add more bite to the satire. She kicks the butt of white privilege and adds a new wrinkle to plays about white privilege. Winkler creates a handful of stock characters, but her snappy writing, replete with literate dialog and references; supported by sizzling direction from Lily Tung Crystal; and delivered by an ensemble of actors that make the most out of their roles, results in a hilarious outcome.

Dysfunctional families fit well in both melodrama and farce, and this family dysfunctions at a high level. Blythe (the epitome of names representing white privilege) survives as the widow of a famous actor, Derek Donnelly, basking in the reflected glory of her dearly departed. A flamboyant Michelle Talgarow revels in her character’s grande dame imperiousness, when dominating her pathetic children, yet cringes ingloriously when caught in peccadillos.

Blythe is surrounded by two grown children losers, her daughter Mary and stepson Joshua, who fail to meet the ambitions of a demanding family. Mary whines, broods, and indulges in repetitive vocalizations. Karen Offereins excels in the character’s whipsaws from incisive to disjointed. Divorced and with no prospects, she suffers her mother’s constant criticism. Joshua is the classic inherited-wealth alcoholic who’s never worked and doesn’t want to. Greg Ayers wildly stomps his way through the role while slurring his language like an inebriated Inspector Clouseau.

The Donnelly household’s customary manic-depression is disrupted by a visit from Blythe’s other stepson, Christopher, who, like his late father, is a successful Hollywood actor. Sean Fenton is charismatic as the straight man (in the comedy sense!) of this family folly. To the family reunion, he has brought his uninvited “assistant” of four years, Charlotte. The fact that she is of humble origins and is appealing and is Asian triggers a series of riotous incidents and changing alliances among the family members. While the acting is noteworthy across the ensemble, Rinabeth Apostol as Charlotte deserves special notice. With all the right nuance, she captures the servile mannerisms of a loyal employee trying to placate everyone. But she shows another side when she breaks the fourth wall and gives biting but amusing accounts of her inner feelings directly to the audience. The real question to be answered in the play is whether she will break through the white skin barrier, and if so, how.

Often, staging by smaller companies at smaller theaters is sparing, but director Crystal’s creative team adds considerable value to the production. In particular, Randy Wong-Westbrooke’s set is detailed, and Kevin Landesman’s lighting is variable and expansive.

The producing theater company Ferocious Lotus and playwright Winkler are on the same wavelength in promoting Asian inclusion in theater. Although the narrative of Two Mile Hollow is about a white family, the pivotal character is Asian played by an Asian, and actors with Asian or Pacific Islanders blood play all of the white roles as well.  So add one more brick to the building of ethnic inclusion in the arts.