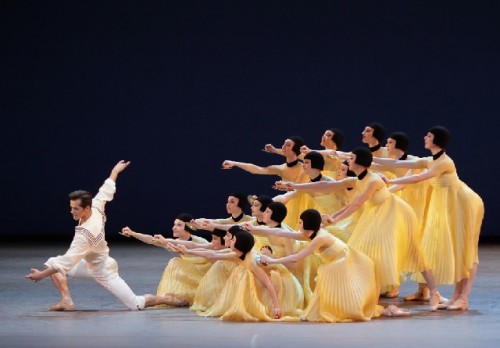 Robert Fairchild and company in Namouna. Photo by Paul Kolnic. 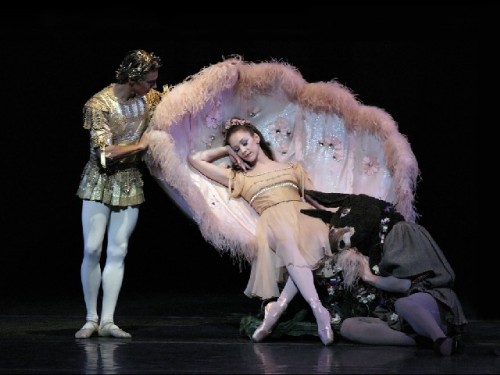 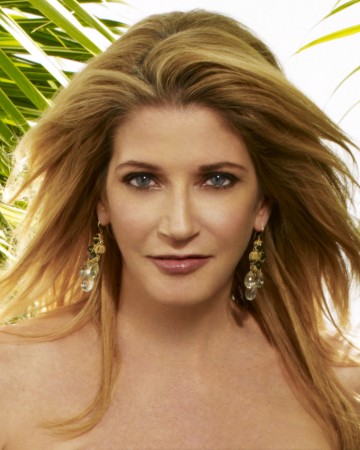 The author Candace Bushnell is chairing the gala at SPAC.

The 2010 Season of New York City Ballet at Saratoga Performing Arts Center presented by HSBC Bank opens on Tuesday, July 6 and extends through July 17. The season will feature 16 stunning ballets including three opening week performances of Balanchine’s beloved story ballet  A MIDSUMMER NIGHT’S DREAM.  The classic work, based on Shakespeare’s famous play, features elaborate sets and costumes and a cast of over 100 dancers including more than 20 children from the Capital Region. The ballet was performed at SPAC on its inaugural opening night, July 8, 1966.

Other season highlights include the Saturday, July 10 Ballet Gala chaired by Candace Bushnell of Sex and the City fame, and her husband Charles Askegard, a NYCB principal dancer. The Gala will also feature the Saratoga premieres of new works by Alexei Ratmansky and Christopher Wheeldon, commissioned as part of the Ballet’s highly anticipated ARCHITECTURE OF DANCE – NEW CHOREOGRAPHY AND MUSIC FESTIVAL.  Ratmansky’s ballet, Namouna, A Grand Divertisement  is set to Édouard Lalo’s Namouna; Wheeldon’s ballet, Estancia, is set to Argentine composer Alberto Ginastera’s composition of the same name.  Wheeldon’s work also features scenic design by internationally acclaimed architect Santiago Calatrava, best known for his dazzling public projects such as bridges, stadiums and train stations in cities around the world, and currently designing a new transit hub at the World Trade Center site in lower Manhattan.

The summer program also features THE STEADFAST TIN SOLDIER, a beloved Balanchine work based on a Hans Christian Anderson fairy tale that was commissioned and premiered at SPAC in 1975; STRAVINSKY VIOLIN CONCERTO, which Balanchine created as part of the legendary Stravinsky Festival and which was last performed at SPAC in 2004; several popular works by Jerome Robbins including N.Y. EXPORT: OPUS JAZZ and THE CONCERT; and RED ANGELS, a visually dramatic ballet choreographed by Ulysses Dove that was last performed at SPAC in 1998.

“In 2010, New York City Ballet will present for Saratoga audiences, a magnificent program that showcases the extraordinary gifts of its dancers and the exceptional breadth of its repertory. We are particularly excited to present Balanchine’s classic and enchanting A Midsummer Night’s Dream. There is no better stage for this woodland fairy tale than SPAC itself, which has the forest, fireflies and moonlight to make this lyrical work come to life,” said Marcia J. White, SPAC’s President & Executive Director.

“Another storytelling gem that will be part of the season is The Steadfast Tin Soldier, which has a special place in our history as a work SPAC commissioned and premiered on its stage in 1975,” she added.
“Just as remarkable as its mastery of classic works is New York City Ballet’s unparalleled commitment to new choreography, underscored by its innovative Architecture of Dance festival. Gala audiences will be treated to the Saratoga premieres of new ballets by Alexei Ratmansky and Christopher Wheeldon – two of the most gifted choreographers in the world today,” said White.

Other works on the 2010 program that have not been performed for Saratoga audiences in several years include: LA SOURCE which combines thrilling ensemble work with virtuoso pas de deux; WALPURGISNACHT BALLET which pairs Balanchine’s elegant choreography with a passionate score by Gounod; Jerome Robbins’ spirited FANCY FREE featuring Leonard Bernstein’s score; and Balanchine’s WHO CARES? set to George Gershwin’s classic score.
The schedule will also include Peter Martins’ BARBER VIOLIN CONCERTO which explores the contrast between classical ballet and modern dance, and Christopher Wheeldon’s AFTER THE RAIN.

“One of our highest priorities is to introduce new audiences to the sheer beauty and excitement of New York City Ballet. The addition of the Children’s Workshops on the Lawn, Emma Willard American Girl Night, CDPHP Family Nights and other pre-performance events have been a tremendous hit among families who’ve discovered that these evenings offer wonderful quality time together, as well as the opportunity to give children the unforgettable experience of attending a live classical performance,” White concluded
.
Ticket prices for SPAC’s New York City Ballet performances start at $18 for lawn seats; inside seating ranges from $26 - $72.50. The “GE Kids in Free” promotion entitles children 12 and under to free lawn admission for classical performances (excluding the Gala and American Girl Night); Citizens Bank’s Student Discount entitles middle school, high school and college students to lawn admission for just $10. Tickets for New York City Ballet’s SPAC season are available on SPAC’s website at www.spac.org or by contacting SPAC at 518.584.9330, or at the Box Office.