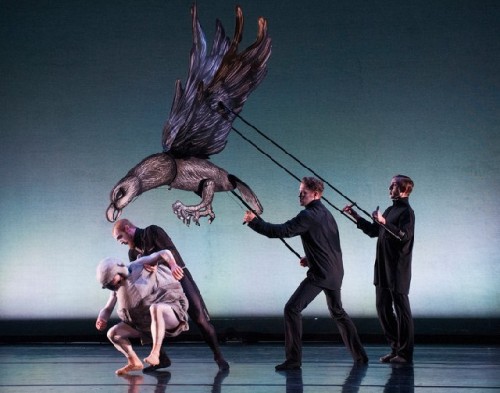 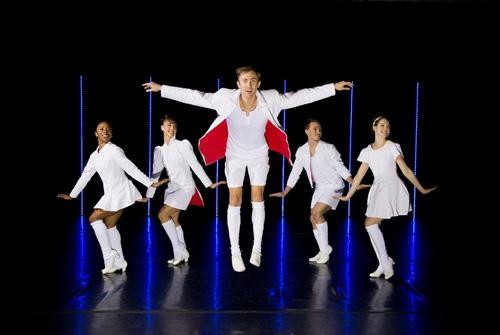 An exuberant dance set to a medly of music by Queen. 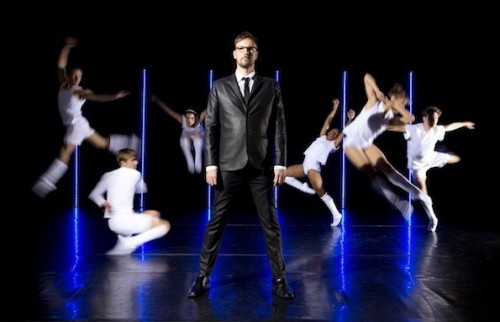 McIntyre taking a bow with the dancers.

We attended the Sunday afternoon performance of the Trey McIntyre Project at Jacob’s Pillow. The standing ovation of the audience was sustained far longer than usual. When they reprieved “We Will Rock You” by Queen, with several solos by the dancers, the energy level in the Ted Shawn Theatre was as scorching as the summer heat and humidity.

The ovation went on and on until Trey McIntyre, a very tall man in trousers, a white shirt and black rimmed glasses, joined the dancers. Eventually there was an explosion of confetti from either side of the stage. With that the wonderful and inventive Trey McIntyre Project is no more. He will now pursue other interests as well as continuing to choreograph for a number of major companies.

With two pieces, Vinegar works: Four Dances of Moral Instruction (2014) and Mercury Half Life (2013) divided by an intermission there was ample evidence of why this wonderful company of superbly trained artists will be missed.

The pieces demonstrated similarities and difference in the McIntyre style. The first was a narrative in four sections inspired by the dark, gallows humor in the illustrated books of Edward Gorey (February 22, 1925 – April 15, 2000). It was set to the music “Piano Trio No. 2, Op. 67” by Dmitri Shostakovich, performed by Trio Solaris.

The second work Mercury Half Life (2013) was a crowd thrilling romp set to a suite of songs performed by the rock group Queen. The Half Life may refer to the too brief life of lead singer Freddie Mercury (5 September 1946 – 24 November 1991).

Dressed in a British school boy outfit Brett Perry delightfully and very quickly configured all of the individual letters of the alphabet. Each identified an individual who came to a bad end. “A is for Amy who fell down the stairs. B is for Basil assaulted by bears. C is for Clara who wasted away. D is for Desmond thrown out of a sleigh…”

Oh My. What terrible fun.

The audience howled in appreciation for John Speed Orr as a blob like “The Beastly Baby.” He slithered awkwardly about attacked by a giant puppet bird that had him for lunch. Oh the terrible horror of it all. How our hearts went out to the unfortunate little imp laughing through delicious bathos.

My only complaint about the piece is that with additional segments "The Deranged Cousins" and the "Disrespectful Summons" it flew by all too quickly. The delightful dance left us hungry for more of McIntyre’s inventions on Gorey. It ended when they wheeled out the penguin puppet representing Gorey’s signature "The Doubtful Guest" which was introduced in a 1957 illustrated book. We were delighted when its eyes glowed. The little creature was almost human.

The second half of the program couldn’t have been more different. There was no narrative content and instead we were treated to vignettes based on a range of material performed by Queen.

From 1970 until the death of Mercury in 1991 the British rock band released a total of 18 number one albums, 18 number one singles, and 10 number one DVDs. Estimates of their record sales are from 150 million to 300 million records.

In this stunning work yet again we experienced the range and magnificence of one of the great British arena rock bands of its era. They were particularly melodic with soaring harmonies that were never self indulgent. With its hypnotic, catchy beat and classic hooks “We Will Rock You” is an anthem of rock. The McIntyre choreography was so spectacular that they performed it twice and that still wasn’t enough.

The dancers were plainly attired in white shorts for the men and skirts for the women with reversible jackets. Now and then the women lifted their skirts to reveal their red lining. With knee high stockings again the costumes evoked a prep school, adolescent look. Perhaps to accent the youthful rock and roll. The impish schoolboy look recalled Angus Young's antics with AC/DC.

The dance was energetic and athletic primarily accenting the moves of the male dancers. Some of the music and coupling reminded Astrid of minuet’s. Stylistically the dance was a mélange of freeform movement, classical ballet and incongruous tap dance. In addition to individual pirouettes the male dancers at times partnered or formed trios with lifts. Some of the most stunning moments occured when Chanel DaSilva soared and leaped into the arms of her partner.

It was a pure delight to hear such classic rock set to dance. Highlights included Queen standards; “Killer Queen” “Bicycle Race” “We Are the Champions” and, how fitting for McIntyre’s final performance of the company “Another One Bites the Dust.”

It was yet another historic occasion and a fitting send off for a superb company. We will watch with interest as McIntyre reinvents himself. Thanks and good luck.