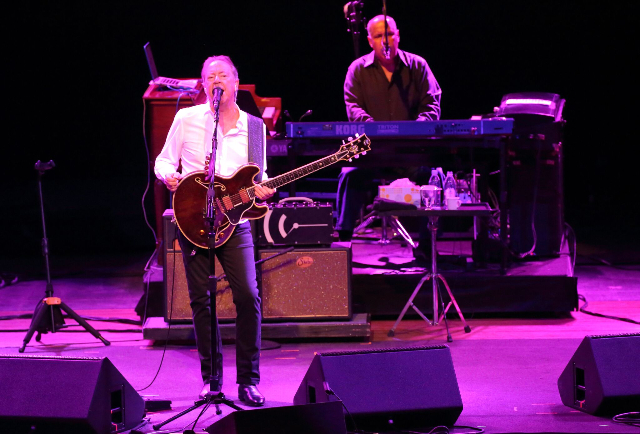 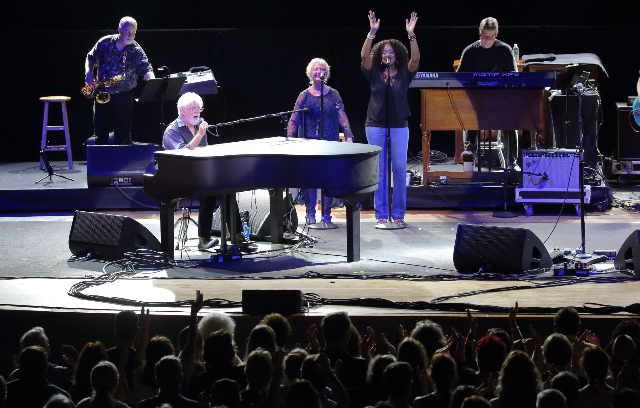 Now 73, tall and lanky rocker, Boz Scaggs, performed for an audience of his peers last night launching the popular artists series at Tanglewood.

He was joined on the bill by Michael McDonald who opened with a 90 minute set. The pianist and vocalist is best known for his work with Steely Dan. Donald Fagen of that group has toured with Scaggs and McDonald as Dukes of September.

It was a soggy night in Lenox as a few brave souls huddled under umbrellas on the lawn.

The VIP section was packed solid but in the back of the vast Shed there were empty seats.

There are several factors that may have influenced that: Bad weather, Thursday night of the holiday weekend, and a career that peaked from 1976 through 1981.

Scaggs took breaks from the studio and touring while exploring an eclectic range of musical modes.

In 1976 his album Silk Degrees reached #2 on the Billboard album charts. It yielded two hits "Lido Shuffle" and "Lowdown" which to the delight of fans, on their feet, stomping and singing along, ended his hour long set at 10 pm. He came back with a generous selection of encores.

As a performer, he is the essence of low key, confident, moody and laid back. There was a range to what he performed but one could feel the Southern roots, soul and blues of an artist who grew up listening to  radio in Texas.

While in prep school he became friends with Steve Miller. It was there that he was given the nickname "Bosley" later shortened to "Boz." He and Miller then moved on to University of Wisconsin-Madison where they continued to perform together. Scaggs was the original lead singer for the Steve Miller Band. He later became a temp replacement then a regular member of the Doobie Brother. There was  a later stint with Toto.

For a number of reasons Tanglewood has expanded its popular artists programming but with an element of caution and some trepidation from the town of Lenox.

The popular concerts start an hour earlier than the classical ones. The 7PM curtain and drive to Lenox means rushing through dinner. There is also a curfew so the local folks can enjoy their sleep.

The anxiety level ratcheted up a few years back when Wilco blew the roof off the Shed. They wanted to make annual appearances but Tanglewood was chicken. Instead they formed a relationship with MASS MoCA. They just mounted their fifth, sold out, weekend-long, biennial Solid Sound Festival in North Adams. The event drew some 8,500 fans.

Having eased into rock 'n' roll there was extra security last night. There was no need for that as the essence of the evening was laid back and cool. Unlike Train there were no teenie boppers rushing the stage. Those who did pop into the aisles to boogie with the band were promptly escorted back to their seats.

From 1972 he eased into the set with "It's Over" which reached #38 on the charts. Since 1965, under his own name he has released 23 albums. He performed from an upcoming release. His first gold album was Slow Dancer in 1974. The following year Silk Degrees, went platinum times five. That was followed by three more platinum albums: Down Two Then Left, 1977, Middle Man, 1980, then Hits!, also from 1980. The next two albums charted at 47 and 91 while Fade to Light in 1986 failed to chart. It has been hit and miss since then but Memphis in 2013, a compilation of his favorite covers, was back on track at #17.

Seemingly for each new song a roadie brought him a different guitar. In addition to silky smooth vocals he can also get down with lean and mean picking.

While there was comfortable interaction with the audience he is not a chatty, anecdotal or splashy performer. He is more like a country blues player than a rock star. That was evident in a straight up but supportive band of bass, drums, keyboards, and a sax/ keyboard  player. The bass and guitar players provided backup vocals.

This is somewhat different from tours when he was a top selling artist. With "Lowdown" and "Lido Shuffle" he toured with an all star horn section and female backup singers.

As a rock star Scaggs may be past his prime but his performance continues to be top notch with power and rich nuance to the vocals.

For most of the set he took us to school with well chosen, articulate and fascinating material. It demonstrated the range of his eclectic interests.

He described being interested in all kinds of Southern music. From Louisiana he performed the provocative novelty tune "Rich Woman" by Li'l Millet and the Creoles. There was a Bo Diddley back beat and smarmy lyrics about how she had the money but he had the honey. He followed that by commenting "I wouldn't mind being a kept man."

From 1989 to 1992 Scaggs joined Fagen, Phoebe Snow, McDonald and others as a part of the jams of New York Rock and Soul Revue. From that phase he "borrowed" Fagen's arrangement of Chicago soul man, Joe Simon's "Drowning in a Sea of Love."

Introducing "Some Change" he said that every four years we make a change but that this time "We got a surprise." Indeed.

Like a lot of things in American life the 2001 album Dig and its material kind of got lost. On this tour he is reintroducing a lovely tune "Thanks to You." In the context of that troubling time it is a poignant tribute to how the generosity of others enriches our lives.

Easing into the home stretch of the set the intensity increased with "Georgia" followed by the crowd appealing hits "Lowdown" and "Lido Shuffle."

Coming back on stage he launched into "What Can I Say" then took it on home with pedal to the metal.