The Roommate at WTF 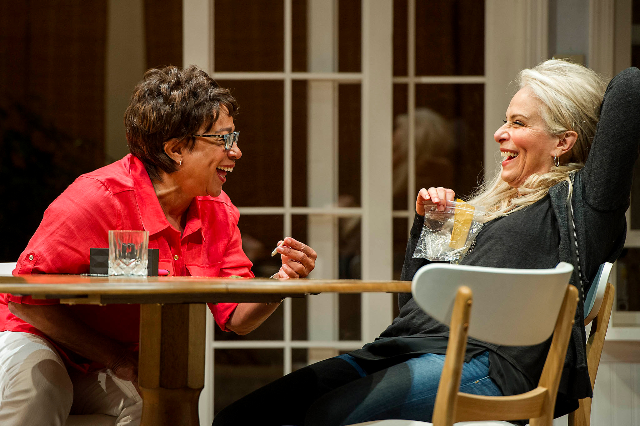 Roomates Sharon (S. Epatha Merkerson) and Robyn (Jane Kaczmarek) getting to know each other. WTF images by Daniel Rader. 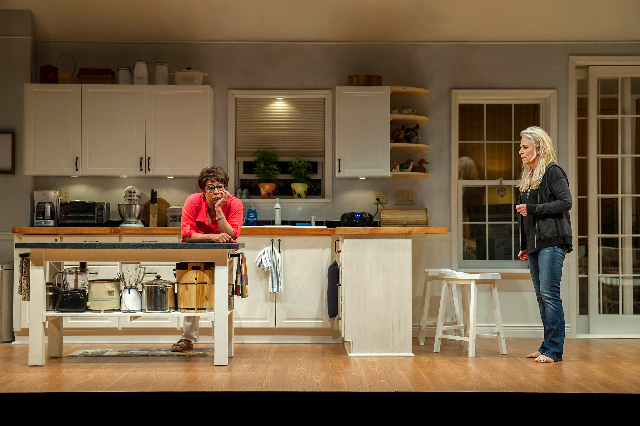 At home is the generic set by Dane Laffrey. 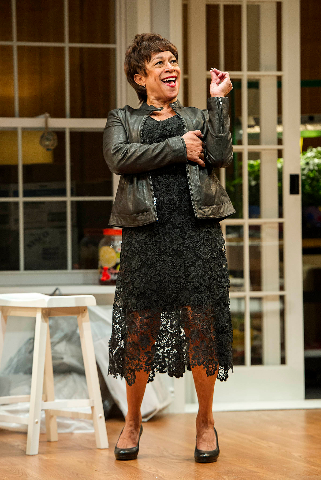 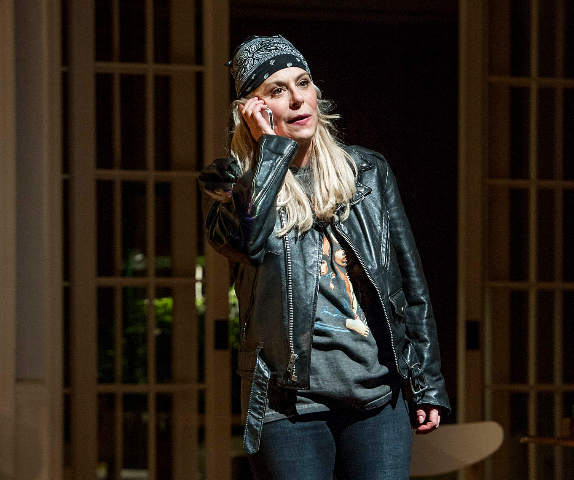 Robyn dressed as a street smart lesbian grifter and vegan.

The production at Williamstown Theatre Festival, however, diminishes the subtle nuances and best assets of the play by overproducing them.

Yet again we have seen an intimate, potentially charming play which is more suited to the smaller Nikos Stage, over inflated to fill the less forgiving space of the Main Stage. That is, perhaps, motivated by the marquee casting of two players primarily known for their work and awards for the small screen.

The program describes the setting as "Now. Summer. A big old house in Iowa City."

Filling the stage from stem-to-stern is a design by Dane Laffrey that seems as bright, shiny, and up to date as a product model straight out of Home Depot. The cold and generic set is more ordered from a catalogue than designed.

Before a line is uttered it begs too many assumptions of the back story of Sharon (S. Epatha Merkerson) and why she is seeking a roommate (the Robyn of Jane Kaczmarek).

There is nothing in the design that evokes "big old house" or the specific rural setting of Iowa City. What we really need to know is that it is about as far away and different from the Bronx of Robyn as one can get.

In an initial exchange Sharon wants to know about the dangers for a woman living in the mean streets of the city. While, surprise, Robyn is freaked to learn of the occasional tornado. Point, set, match.

This is really about the dichotomy of an innocent, unsophisticated, country mouse, divorced housewife (Sharon) and what emerges as a shady city mouse (Robyn). The unraveling of the play conveys their improbable reversal with dramatic consequences.

The newly recruited roommate remarks on how large and spacious the house is. But there is nothing about it that conveys any intimacy or a lived in feeling. The question begs how Robyn will find her own space and a comfortable living arrangement.

The script states that she has a room upstairs but it is small and Sharon encourages her to leave the boxes on the porch. In a plot point one of them  contains ceramics from Robyn's phase as a potter.

It is about more than just making room in the cabinets. Sharon must absorb and adapt to the first of many disorienting revelations that come tumbling out. It seems that not only is Robyn vegan she is also a lesbian. Further, with a bit of poking into her stuff, Sharon learns that Robyn may not even be Robyn. Is she Victoria or one of many other identities?

For the play to work there needs to be a credible metamorphosis and reversal between the characters. Just what motivates Sharon to not only accept but embrace the stark differences between them?

In this production, as directed by Mike Donahue, that never quite happens.

The transitions are overstated and too often played broadly for laughs. The essence of The Roommate is arguably more dramatic and tragic than comic.

Seemingly out of nowhere, for example, the innocent little housefrau, Sharon, transforms into a pickpocket, grifter and drug dealer. She shops at Walmart to pick up a piece. The script calls for her to purchase a weapon. It is a necessary asset now that she has chosen to be a criminal. At WTF, however, this is way overplayed when she whips out and brandishes an assault weapon.

As told by Silverman in this unlikely mid-life and mid-west convergence the audience is presented with their similarities and differences. For both women there is a back story of crisis and disruption as well as estrangement from their children.

This is conveyed by phone calls. Sharon's son never calls back and Robyn's daughter isn't speaking to her mother. We learn that Robyn has pledged to get out of the life by moving to, of all places, friggin' Iowa. The vegan lesbian also wants to quit smoking.

If Robyn wants to turn over a new leaf why is she so readily lured back in by a hayseed, divorced housewife? It would seem that she has more street smarts than that. Or does she? Has the innocent and bumbling Sharon somehow found the fatal flaw that unravels the layers of deception of a gifted grifter? The innocent, unsophisticated Sharon should be more of a mark than sleuth.

The lighting by Scott Zielinski nicely makes transitions from day to night then dawn. Costumes by Anita Yavich well define the lifestyle differences of the women. But why on earth has Robyn been given such a distracting, ragged wig? Her hair is such a mess that we wonder about her character. A shorter butch look might have worked better. She is supposed to be hip and tough but in this iteration she just doesn't look right.

Both actors are skilled performers but these roles, particularly as played by Merkerson, never seemed suited to them. There was never the sense that we were seeing anyone other than S. Epatha Merkerson. She played herself as Sharon rather than Sharon as Sharon.

Which, when it comes to selling tickets, is not such a bad thing.