A Human Being, of a Sort 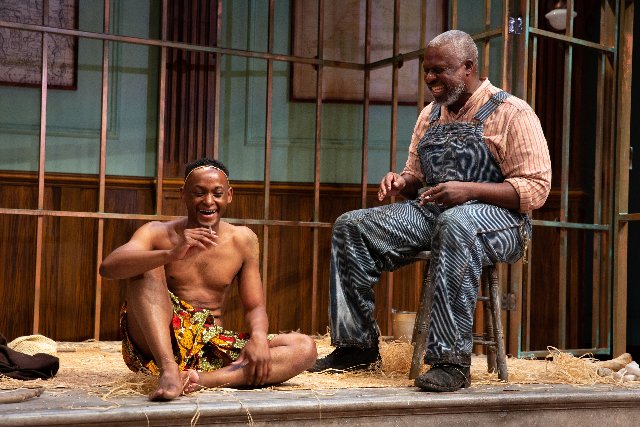 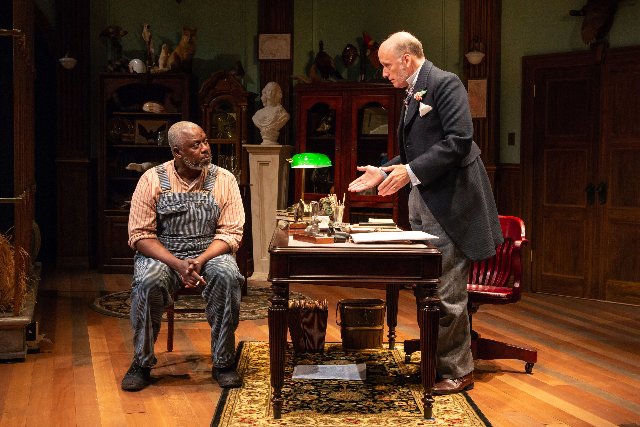 Smokey and the Zookeeper (Frank Wood) 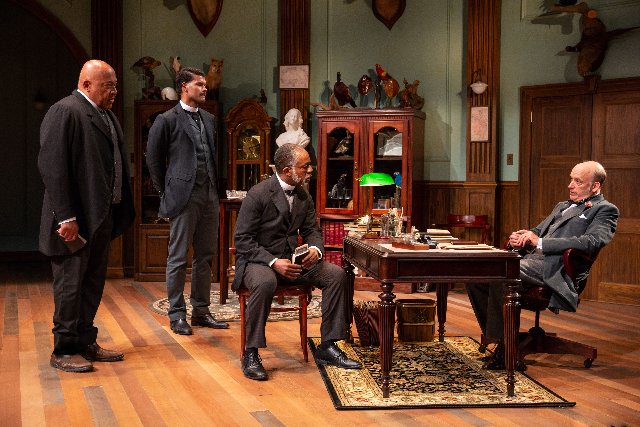 The ministers argue for surrendering the Pigmy to an orphanage. 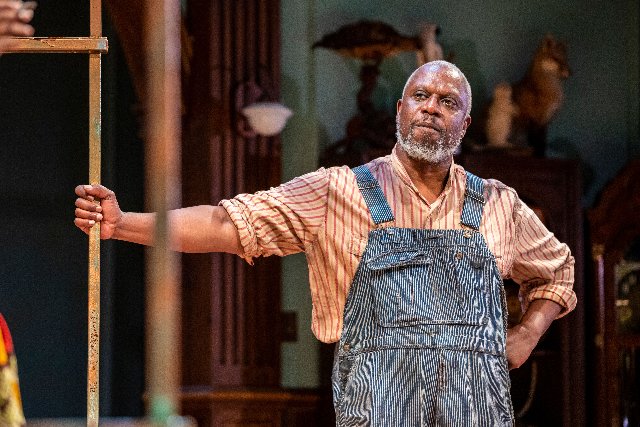 A fine performance by Braugher as Smokey.

In 1906 a Congolese Pigmy native, Ota Benga, was brought to New York City, placed in a cage along with monkeys, orangutans and other primates for display in the Bronx Zoo.

The playwright Jonathan Payne has created a fictional play based on the historical event.  A Human Being, of a Sort is being given a world premiere at the Williamstown Theatre Festival’s Nikos Stage.

The set by Lawrence E. Moten III meticulously creates the ambiance of the oval office of zookeeper William Temple Hornaday (Frank Wood). There is a line of taxidermy heads of deer, moose, bear and boar. The space also entails a large cage that holds the Pigmy.

The actor, Antonio Michael Woodard, while small in stature hardly resembles the distinctive body type of a Pigmy. He is naked but for loose wrapping in African cloth around his waist. As the theater was air conditioned we have concerns for his comfort and health through the run of the show.

The Darwinian associations of displaying him with primates, and implied primitivism, are blatant signifiers of racism for a contemporary audience. That is amplified in the fictional version of the historical event.   Hornaday justifies the exhibit as an ethographic display for the education of the general public. Backing that argument this occurs in a non profit zoo rather than a circus or side show. Hornaday presents himself as a public servant rather than an entrepreneur.

There is a trio of black ministers who strongly object to an egregious example of incarceration and slavery.  Sullivan Jones (Reverend William Slater), Keith Randolph Smith (Reverend George Sims), Jeorge Bennett Watson (Reverend James Gordon) demand that Benga be handed over to their orphanage. There he will be educated and Christianised. In an ideal outcome, once properly civilized, he will be returned to his village as a missionary.

The response of the clever Hornaday is that the Pigmy is there of his free will. It is contracted through the mysterious trader and adventurer Samuel Phillips Verner (Matthew Saldivar). In a confusing decision that encounter and apparent deal is seen at the end of the two act drama. It makes the argument more credible. It is plausible that Verner bargained to save his life. The Belgian army was slaughtering his people including Benga’s family. It is left to consider whether Verner saved or enslaved Benga.

At the end of a three month "booking" it is implied that Benga will be set free. What will then become of him is never articulated. Previously he had been displayed at the St. Louis World Fair. Verner is making money but we never know what deal has been struck with the Pigmy.

In the limited scope and context of Payne’s play this Zoo display is presented as an isolated event. The Wild West shows of Buffalo Bill and sideshows of P.T. Barnum were all too ubiquitous up to and including the early to mid 20th century.

Pocahontas (c. 1596 – March 1617) was presented to the court of Elizabeth 1 and died in Great Britain. During the Age of Exploration European connoisseurs created wunderkammern or rooms of wonders. Menageries of wild animals inspired zoos. Exotic vegetation was cultivated in botanical gardens. In this wider context the display of  Benga was anything but unique and that should factor into our response to the play.

Last season in a co-production with Ma-Yi Theatre and Barrington Stage Company, The Chinese Lady, by Lloyd Suh, focused on a remarkably similar side show also from 1906. While not caged the exotic woman in question was displayed in an ersatz Chinese setting. Audiences paid to see her drink tea and mince about on bound feet. While male laborers were common at the time she was billed as the only Chinese woman in America.

These phenomena are reprehensible to a contemporary audience. The argument was that the individuals on display were provided food and shelter and perhaps even a modest income. Today we question conditions for circus animals and those confined to cages in zoos. Elephants are no longer an element of what’s left of circuses.

In an era of globalization we are used to seeing exotic nature and culture through television documentaries. There is a reaction against viewing the other as an ethnographic specimen or an animal in a cage.

The approach of A Human Being, of a Sort is social justice theatre. Its polemical premises are transparent and as such lack push back.

In an excellent performance Andre Braugher, a thick set, gray haired convict in overalls is being leased from the chain gang. During an interview with Hornaday he is asked to state frankly how he feels about being retained as the keeper for Benga. He is cautious and respectful, appropriately humble, and subservient. But Hornaday presses him to be more frank and creative. His potenial reprieve from prison depends on giving the right answers.

It seems that he is a good man with a big heart. His crime was stealing two apples. He was lured into it by a white man busy stuffing his pockets. When they were both arrested the next day the white man was let go. Smokey, as he is called for his addiction to cigarettes, is given three years of hard labor. This violation of justice too readily evokes Jean Valjean whose life was ruined for stealing a loaf of bread.

The most poignant and compelling heart of this play entails the evolving relationship between Smokey and Benga. The commonality is that they are both black men and prisoners. Speaking with an accent Benga is surprisingly clever and articulate. He knows his role and how to play the game. To get his cooperation Smokey bribes him with cigarettes.

Seemingly having gained trust and control Smokey argues that Benga be let out during the day to roam the grounds. It is the creativity that Hornaday has suggested. We are filled with dread when he swears that nothing will go wrong.

As directed by Whitney White too often the staging is static. This is a wordy play with long intervals of dialogue. This starts with Smokey seated on the other side of Hornaday’s desk. The ministers, when they appear, stand and deliver. There are fixed exchanges between Smokey and his charge behind bars.

The only movement on stage is the peripatetic Pigmy. There is visual relief as he cavorts about his confines and even scrambles up its bars. The other movement occurs when, for no apparent reason, Smokey moves the cage. The bars surround three sides and the fourth is open. We must imagine that it is enclosed but this creates some welcome visual tension and resultant imagination.

With two acts this drama needs to be tightened to one. The pace is too incremental. Too soon we get the point and wonder where it is going. By its conclusion the experience has been less than transformative. The conclusion appears to be that Smokey’s trust has been violated. He will be sent back to prison and Benga will be confined under stricter and harsher circumstances. In what way is that a valued insight?

Ending with the flash back to Benga and Verner in Africa only further obfuscated a drama lacking focus and direction. It would have helped to have some closure with Smokey who screwed up and just disappeared. Back to the chain gang really isn’t an answer. The play ends abruptly and needs restructuring and closure.