William Inge’s Off the Main Road 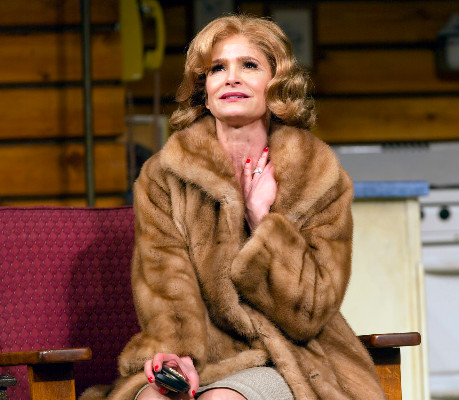 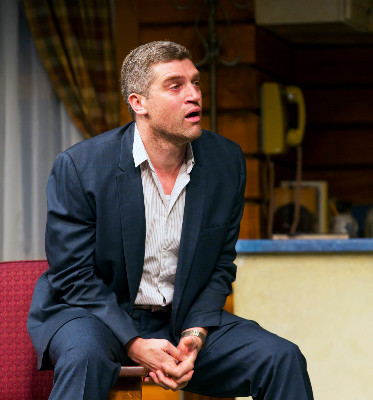 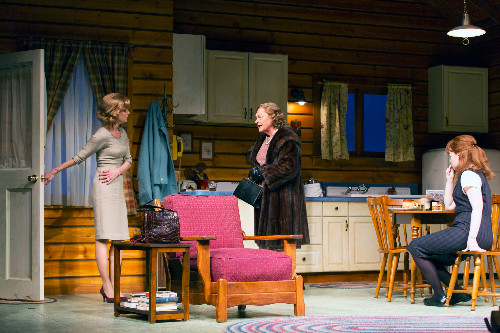 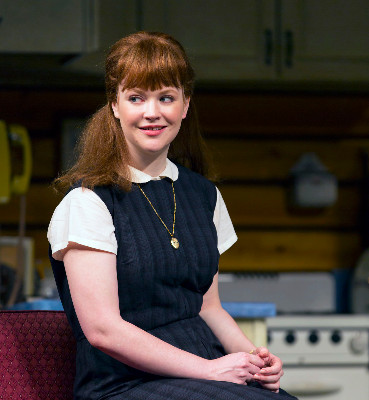 Mary Wiseman as the daughter Julia. 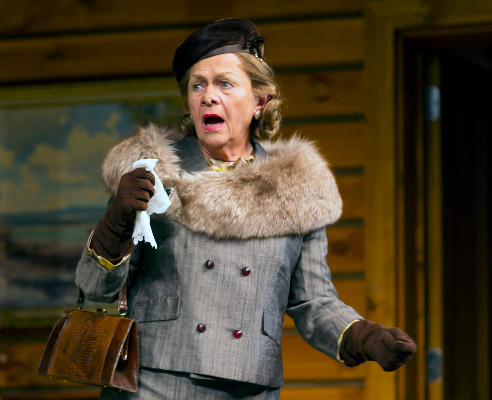 Estelle Parsons was superb as the grandmother. 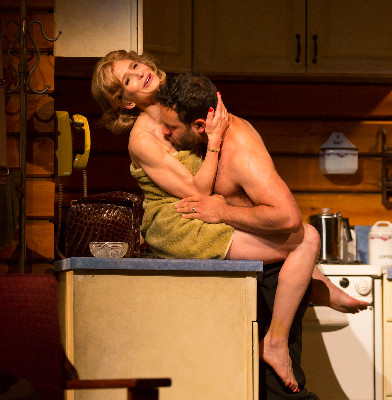 Faye was seduced by the common but sexy cabdriver Gino (Aaron Costa Ganis). 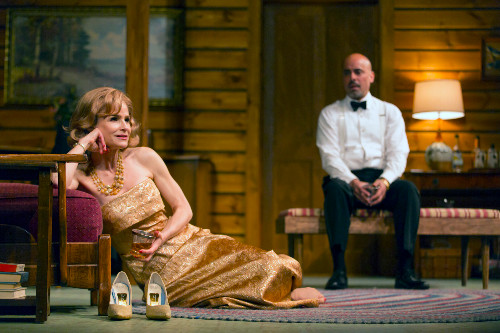 The premise was intriguing.

Launching the season of the new artistic director, Mandy Greenfield, she presented a rediscovered, mid 1960s play by the renowned William Inge (1913-1973). It is having its world premiere at the Williamstown Theatre Festival.

In 2008 works from the Inge estate were released including a number of one act plays as well as the script which was initially produced for television. The adapted play has had readings but this is the first full staging.

It is being given the superb production that one expects from WTF.

Yet again this play reveals that Inge, whose struggle with homosexuality ended in suicide, wrote with compassion and insight about women. The primary focus of this drama is the generational interaction between a battered woman of means, Faye Garrit (Kyra Sedgwick), a prim, plain, dutiful daughter Julia Conroy (Mary Wiseman) who is starved for her love, and a meddling, privileged, obnoxious grandmother, Mrs. Bennet (Estelle Parsons).

The primary male characters, the former baseball star and abusive husband, Manny Garrit (Jeremey Davidson) and a cabdriver who forces himself on Faye, Gino (Aaron Costa Ganis) are written by Inge as variations on beasts and brutes.

As the play opens Faye in furs with shades and Julia are checking in for an “indefinite” stay in an off season, vacation cottage some 20 miles from St. Louis.

The time is January to April, 1966 but other than some dated lines and attitudes this is largely a fringe piece from the Woodstock era. Rather like Madmen it presents a skewed and narrow view of a time of drugs, sex, rock ‘n’ roll, war, dissent and struggles for human rights.

The somber, wordy, introspective mood of the play is an indicator of how Inge’s style had fallen out of touch with the Broadway mainstream. The decline in his marquee power dwindled as had that of his mentor, sponsor and then rival, Tennessee Williams (1911 - 1983).

They had the pulse of Broadway in the 1950s but were out of touch and struggling with their inner demons after that peak period.

The notion in operation is that enough time has lapsed for us to take another longer and more in depth look at the great masters of American drama at mid century including Inge, Williams and Arthur Miller (1915 – 2005). This includes scholarly activity as well as numerous productions and festivals. A new generation is looking at their work with fresh eyes and deep respect.

The unearthing of a neglected, full length play by Inge is a major event.

That said, it also has to work as a compelling evening of theatre. Based on the responses of the audience last night the impact of Off the Main Road is minor compared to his masterpieces. This is an interesting, very busy, at times over the top, disjointed play that is being given the best possible shot with a top notch staging and mostly terrific cast.

There is, however, only so much that can be done with an inferior script. You can drive trucks through the plot and uneven articulation of characters. The high octane action sequences, with as they say in baseball, Manny being Manny, are less than plausible.

As is usual at WTF our initial response is engaged by another stunning set from the always incredible Takeshi Kata. The wood paneled cabin, such a signifier of the era, is set off with ample space for woods and entrances to the cottage. Significant aspects of the drama occur outside including Manny invasively knocking at the door. There is also appropriate light, Ben Stanton, and sound design, Ben Truppin-Brown.

The costumes by Paloma Young are particularly precise at indicating the social status and glamour of Faye as a woman of privilege in the throngs of self medication and last gasp of menopausal carnal craving. She is suitably glamorous although the wig by Jared Janas was overly immense and did not sit well on her head.

By contrast Julia is presented as plain and prim. She first appeared in the dark plaid uniform of the convent school she is attending within bus distance of the cottage/ hideaway.

The most compelling aspect of this play is the dynamic interaction between the three women.

Early in the first act the mother, Faye, is ordering the daughter, Julia, to act as her maid. Fetch me this or that, be a dear and unpack my bags. It is just 10 AM and Faye demands her pills and starts to hit the booze. While the drinking is a constant we never sense its impact. Were most of us to drink that much we would be passed out on the floor by the end of the first act.

As always Sedgwick delivers a complex and richly nuanced performance. Her every move and inflection conveys the deepest command of craft.

But, my friends, the performance of Wiseman was truly astonishing. I’m not sure what I think of Faye as yet another spoiled, rich lady with problems. Julia, however, was truly captivating in conveying struggling to find love and a sense of purpose. She doesn’t just want to go along with what is expected of her. Faye, as mothers do, suggests possible suitors. Sex and the prospect of a relationship scare Julia. Aloof treatment by her self absorbed mother left her damaged and insecure. Wiseman conveys this with brilliant finesse.

In a sharp exchange with her mother we learn that Julia was the result of a forced early marriage to an older man who died and left her with a fortune. Against all the best wishes of her society parents Faye married for love to a superstar ball player. Julia is determined not to repeat that mistake.

Yes, she has a fling and looses her virginity but with multiple layers of guilt, satisfaction and vulnerability. While she and Victor (Daniel Sharman) exchange vows of love Julia needs the constant, never wavering higher calling of eternal love.

Were Inge writing today it is likely that Julia would come out as gay rather than retreat to a convent.

The first act spends a lot of time establishing the characters and plot points. That leads to the faster paced and at times frenetic second act.

One of the finest scenes of the evening, when we felt the full, unique power of Inge, comes when Faye and Jimmy, in evening attire, return to the cabin for a nightcap. In every way Jimmy is the ideal man for her. What a perfect husband he would make except for one problem. He’s gay.

Although Jimmy truly loves her the matter of his sexuality is entirely off limits. She continues to probe but he insists in no uncertain terms that it is none of her business. It was an era in which gay men remained closeted and even married to appear normal as a social and professional, career strategy.

We deeply care for Jimmy and Julia. These characters are so conflicted and closeted that we feel the repressed passion and pain of the playwright. One may imagine that the TV audience that saw the teleplay in the 1960s was rather clueless to understand its closeted agenda. Today that is much more evident and understandable to the audience.

The performances of Ganis (Gino) and Davidson (Manny) were rough and crude. That’s how they were written so the actors performed the roles they were given. They conveyed only caricatured personas with little opportunity to establish dramatic depth.

In a rage Manny assaulted and killed Gino when he overheard him in a local bar bragging about seducing Faye. That sex scene was less than credible as was the over the top murder scene.

The sexual abuse of athletes is today an all too common news story. Like Manny in this 1960s play, because of wealth and fame, too often celebrities get away with murder or a slap on the wrist. Having killed a man in a rage Manny gets off on the defense of temporary insanity.

Rather oddly the play ends on the line of there's nothing left to say. Julia is off to a nunnery, Gino is dead and buried, and Faye returns to Manny. That's so '60s TV. Come now.

While appreciating the effort to produce a neglected work by an American master we just wish that there had been more there, there.