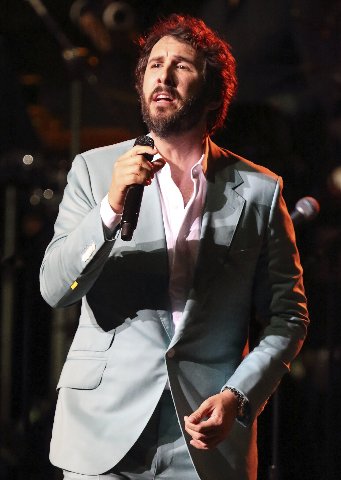 In a chatty exchange with the audience Josh Groban was seated at the piano. During the sound check he asked those attending to help choose a song. They opted for one by Billy Joel. He explained that although he likes to write and perform his own material he is also dedicated to interpreting the work of others.

To demonstrate he offered a tidbit of “Fire and Rain” but proclaimed that he would stick with Joel. Then added that James Taylor is a really good songwriter. He should perform at Tanglewood. “Has he ever been here” he asked.

It was Tuesday, July 2 and the audience shouted that JT will be on stage tonight. (Wednesday, July 3 for his annual gig.)

Acting stunned Groban bolted off the piano bench and dropped to his knees. With campy exuberance he kissed the stage. There was a comment about sharing hallowed ground with an icon of American song.

It was just one of many total gonzo,  over-the-top gags, insights, jokes and schtick that comprised a glorious evening of songs. The range of his voice and choice of material was inspirational and magnificent.

We were fortunate to see Groban with great seats on Broadway for his debut in Natasha, Pierre and the Great Comet of 1812. Stuffed into a fat suit he played Pierre in the raucous musical crafted from an excerpt of Tolstoy’s epic novel War and Peace.

During demanding months on Broadway he informed us that he had lots of notes on ideas for new songs. We heard a couple of them last night during a diverse set of old and new material from his own songs to what he called “hits.”

Some were culled from his album “Stages” a compilation of material from Broadway musicals. With an apology he introduced an encore from the film “Wizard of Oz.” With justification he stated that “Over the Rainbow” the Judy Garland masterpiece was later performed on Broadway.

“We haven’t done it for awhile” he said but he is brushing it up for a reason. After Tanglewood he and the band were slotted for a bus to the airport then the flight back home. In London he is soon scheduled to share the stage in Hyde Park with Celine Dion.

For a 7PM show he was twenty minutes late. He performed until 8:50 and returned for another ten minutes of encores. In addition to his core musicians he performed with a full orchestra and ensemble of backing vocalists. With an orchestra he told us that at times he has trouble finding his own voice in the mix. There were intervals where he soloed accompanying himself on piano or in duets with acoustic guitar.

For a star of his wattage Groban is a welter of contradictions. There is a charming, goofy, self-deprecating, man/child persona. The personal narrative entailed some surprise at his success. With no expectations the first album Josh Groban reached an audience and garnered critical attention.

He attributes much of his success to a “brilliant” producer David Foster. His first four solo albums have been certified multi-platinum, and he was charted in 2007 as the number-one best selling artist in the United States, with over 22.3 million records. As of 2012, he had sold over 25 million records worldwide.

Careening about the stage like a billiard ball he emitted a gosh-gee-shucks aura of “This really can’t be happening to me?” Being a star means that “I get to wear a green suit on stage.” It was an ill fitting schmata and hardly a fashion statement. He would have been just as well served by jeans and a T-shirt. The straggly/raggedy beard could use a trim.

But none of that matters when he bursts, an accurate term, into song. He has the pipes and then some. Although from the selection of material it is difficult to pinpoint a signature style. Perhaps that’s what makes him perfect for Broadway. His true gift is the passion and nuance he brings to conveying the essence of familiar material.

With Don McLean’s “Vincent” he knocked it out of the park. He mentioned that the singer/ songwriter is another great artist who belongs at Tanglewood. He asked if he had appeared there but this time we were spared the full monty accolade.

There were elaborate introductions to most songs. Often these took on a liberal, agit-prop edge. There was a vignette about the importance of arts education. Every kid, as he had, should have the opportunity to follow their dream. That bridged into his “Gifted.”

There was a tribute to those who serve honoring sacrifice, commitment and bravery. That launched a chilling rendering of “Bring Him Home” from Les Miserables.

There were several selections from the 2018 CD Bridges. That included the Billy Joel standard “She’s Always a Woman.” His “River” addresses the issues of depression and mental illness. He talked about the creative process as facing our demons with help from friends and loved ones.

Another from that CD was “Bridge Over Troubled Waters” by his pal Paul Simon. It was preceded by reference to the troubled times we live in. We are assaulted by His tweets and hate speech through social media. People get paid to spread fear and paranoia. As an artist he gets to bring people together as conveyed so exquisitely in his rendering of the Simon masterpiece.

Threading through the stunning evening were many references to the magnificence and privilege of performing at Tanglewood. That started with the invitation of his friend John Williams in 2004. We eagerly anticipate many happy returns to Lenox and Groban’s quirky group therapy sessions.