Cost of Living by Martyna Majok 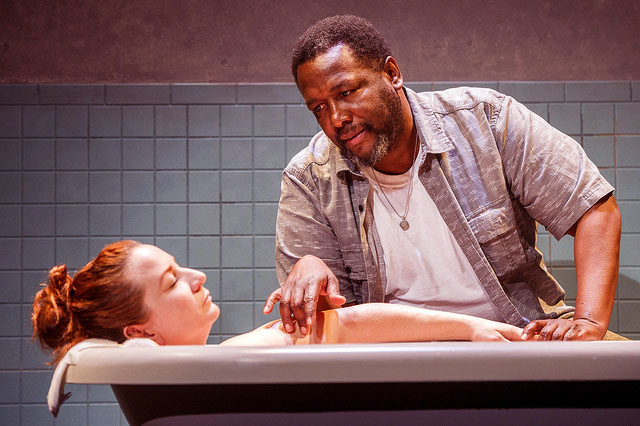 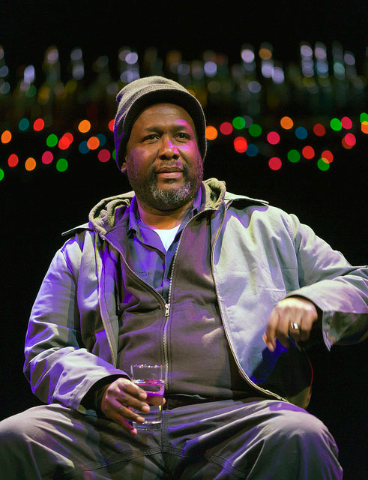 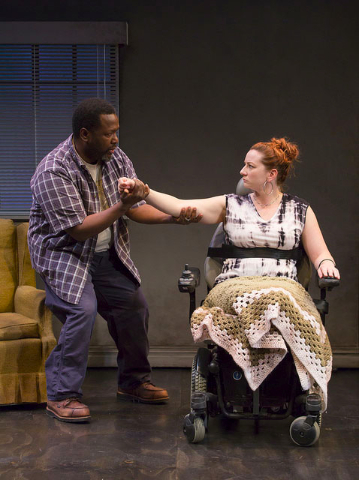 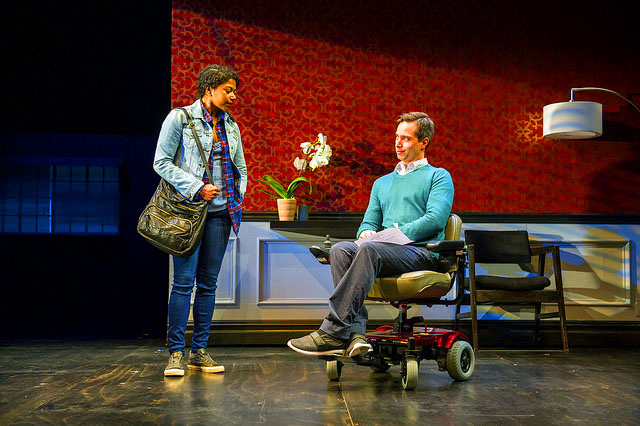 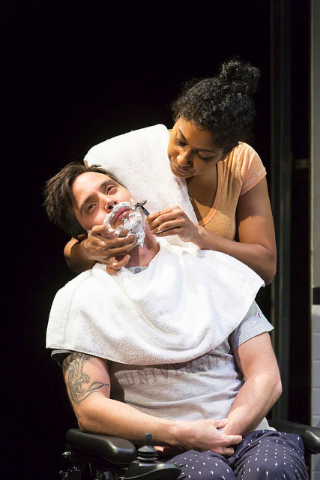 Shaving him is a part of the daily routine. Erickson. 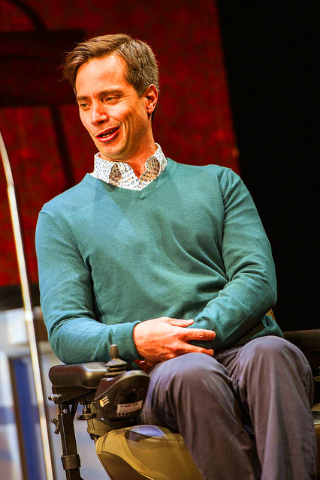 John has a sharp mind and tongue to match. Rader.

On a chair and holding a glass of what is revealed as club soda the redoubtable Wendell Pierce (Eddie) with riveting prowess holds our rapt attention.

In what might be regarded as a ten minute, one act play he deftly reveals a lot about himself. A recovering alcoholic he has been a dozen years sober. Yet he sits in a bar and offers to buy drinks if he succumbs to morose self pity.

As a truck driver he is away from his wife and describes the tough life of the road. What unfolds will be about her, their estrangement, and the accident that took her legs below the knees.

Primarily, with accolades, Pierce is best known for his television work particularly The Wire and Treme. Previously he appeared at Williamstown in the compelling family drama Broke-ology which enjoyed an Off Broadway run.

This searing drama by Martyna Majok, having its world premiere in Williamstown, will transfer to Manhattan Theatre Club in the  coming season.

The award winning playwright has described writing Cost of Living in stages. It started with that compelling monologue. Later she layered on two characters with disabilities motivated by experiences in her own life.

This is not however a preachy, PC message play. It was more about representing people with disabilities and  putting their lives and stories on stage.

To some degree we gain empathy for Ani (Katy Sullivan) a double amputee in a wheel chair, and John (Gregg Mozgala) a man who requires managed care for day-to-day functions.

Because of, or in spite of, their disabilities they have a nasty edge which is less than endearing to the audience. Ani is bitter and angry about her condition and expresses anger and resentment toward her former husband.

John (Gregg Mozgala), a graduate of Harvard and now a PhD candidate in political science, has a sharp mind and quick tongue confined within a disabled body. He is demanding, arch and verbally abusive to Jess (Rebecca Naomi Jones) who is desperate for the job of providing care for him.

There may have been deception in her job application and crednetials. She states working at nights as a bartender but is willing to help him at 6 AM. That would imply a lack of sleep but she is eager for work. She may have graduated from the local university but he asks why she has not moved on. We will learn more of this duplicity as the drama evolves.

The reasons for the anger, manipulation and resentment of Ani and John  are visually apparent. But this does not come with a get out of jail free pass in the exploration of their humanity and failure to develop adequate relationships with those tasked to care for them.

John is rich and uses money as bait for compliance and even subservience from Jess. He uses and manipulates her even though utterly dependent on her physical support. There is a cruel leverage to his demands on her services.

Through their interactions we come to learn that perhaps she is as vulnerable, fragile and dependent as he is. There are stunning reversals which we will not reveal.

The simple, modular set brilliantly designed by Wilson Chin allows us to switch from the grim apartment of Ani to the upscale one of John.

A key issue for persons with disabilities involves personal hygiene and bodily functions. Accordingly there are two bathroom scenes. Eddie tends to Ani in a bathtub and Jess assists John in taking a shower. Our responses to these scenes are harrowing and cut to the core of our being.

This is not an easy play and an audience should be aware of what they are getting into. WTF is to be commended for producing this work but it takes a chunk out of our heart and psyche to sit through it.

Perhaps the takeaway for this experience is that these individuals are just like you and me but forged on the anvil of chronic coping, endurance and the will to live productive lives.

The skillfully drawn drama of Majok also allows for delving deep into the motivations, success and failure of Eddie and Jess who on ever level are as afflicted and suffering as those they care for. These tendencies are exacerbated by constraints as care providers to individuals whose handicaps are more evident than their less obvious sub rosa suffering.

In developing these nuances, yet again, Pierce provides a searing, truly magnificent performance. His everyman persona is infinitely adaptable to a broad range of theatrical possibilities.

In the face of her rage and resentment of having been abandoned by her husband he pleads a compelling defense. Under the mantra of nobody’s perfect his rationale is laced with guilt, humor, excuses and attempts to do the right thing. With limited means he is doing his best to provide for her.

Counter to his ever oscillating emotions her rage is fixed and overwhelming. At peak moments she wants him out of her house and life. She has a panic button but with layers of irony he is the first respondent. He is the designated emergency care provider. There is the complex entanglement of guilt and dependency.

Propping up his deteriorating ego, in response to her vitriolic assaults, he reminds her that he was faithful for 20 years of their marriage. Though he has now lapsed and adds to that a dozen years of sobriety. His affair is falling apart as he finds himself between a rock and a hard place.

He has read up on treatment for chronic depression. Eddie would like to brighten her apartment with cheerful yellow instead of its brown bag drabness.  Also he has  heard that music helps. In one hilarious moment he breaks into a soul shuffle which momentarily amuses her. You never could dance she taunts to which he zings back “Look who’s talking.” For a too brief moment they laugh.

Overall, Eddie is a good guy in a bad situation. Jess is far more complex and it is a demanding role that Jones handles with deft insight and appropriate demarcations including disappointment, fear, vulnerability and that stunning reversal and revelation.

Two days have passed since I saw this play. It lingers and disturbs me. The evening was disorienting and profoundly thought provoking. It was one of those tough love experiences that change who we are and how we view the challenges of others.

That’s not just entertainment. But I am grateful that the play let me come away with mixed feelings about its characters. That allows for staying grounded in our fragile sense of humanity. Thus is not a didactic message play. We are given dramatic information and encouraged to make up our own minds.

This was an evening of theatre that requires a lifetime to recover from.