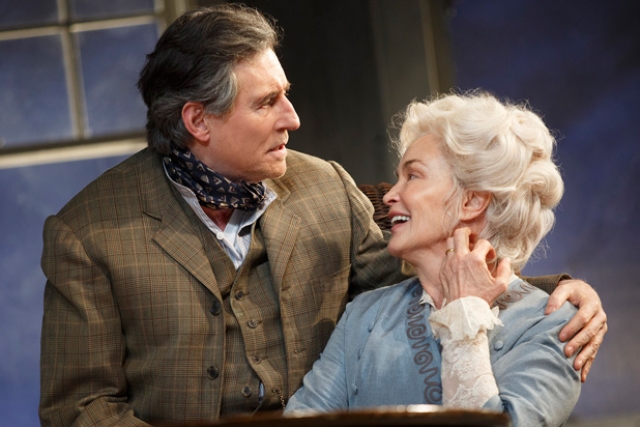 Gabriel Byrne and Jessica Lange as the Tyrones in O'Neills masterpiece.
- Jessica Lange is off, if she hasn’t already arrived, to her isolated Minnesota cabin where “peace and quiet,” reign, she has told Playbill magazine.

Hopefully, Lange’s place for respite isn’t nearly as dark and dreary as the summer home occupied by the long-suffering Tyrone family in Eugene O’Neill’s Pulitzer-Prize-winning “Long Day’s Journey Into Night.”

A splendid Roundabout Theatre Company production of O’Neill’s masterpiece, which was nominated for a Tony award for Best Revival of a Play, ended its run on June 26 at the American Airlines Theatre on Broadway.

It played for 22 previews and 62 regular performances.

The play runs four hours or so, and Lange’s role, morphine addict Mary Tyrone, is particularly demanding. An actress playing her must be able to seamlessly switch emotions very quickly. Keep in mind, performances ran seven to eight times a week. On some days, there were two performances. So how did Lange fare during the final performance on June 26? Despite her advancing age, the multi-award winning actress looked as though she could’ve continued in the role for at least another month.

Lange obviously internalized each and every emotion of her troubled character. Each word, each gesture, each emotion, each nuance of Mary Tyrone seemed effortless. This was true regardless which side of the character Lange was portraying at a given moment.

You felt as though you were listening to a drugged demon when Lange’s Mary spoke in a guttural voice that brought to mind Miss Trunchbull in “Matilda” or the Wicked Witch of the West at her angriest.

When Mary broke down in tears, the sound emanating from her voice brought to mind a depressed woman at a psychiatric ward about to take her life in an instant if a doctor didn’t intervene. She looked at her aching, arthritic fingers as though they were strange-feeling, not to mention painful, appendages from another planet. Then, with little warning, Lange switched to a loving wife and protective mother. She looked almost ethereal when Mary, like a dementia patient, meandered about the funereal home that serves as the play’s setting. You couldn’t help pity Lange’s Mary, even as joy radiated from her face as she thought she was a young Catholic student again, pondering entering a convent and under the protective watch of a caring nun.

Of course, in the grim, alcohol-soaked environment of “Long Day’s Journey,” a character can’t help but yearn for the past, pleasant days.
In the play, The Tyrones’ dark past stalks them like a starved tiger after its prey.

That dreariness was vividly rendered in Tom Pye’s symbolic set design. A large board hovered perilously at an angle above the home. You feared as though the board, which served as the home’s ceiling, was going to come crashing down any moment on the house, mercifully ending the pain and suffering infusing the lives of the Tyrones.

The ceiling partially obscured the stairs that led into the upstairs of the dwelling. You felt as though when one of the characters walked upstairs, they were ascending into a never ending darkness that didn’t lead to heaven, but some state of perpetual purgatory.

The dark, grey hues of the house deftly reinforced the somber ambience of the home, where Mary felt incredibly lonely each time her family left her. Then again, she felt just as forlorn even when they were present.

Those family members include the penny-pinching James, a former actor whose relationship with his adult children has soured beyond repair. Like Lange, Gabriel Byrne captured the many shades of this complicated man. During scenes in which he argues with his sons, particularly James Tyrone Jr., you felt as though you were listening to Willy Loman lash out at Biff for his gypsy-like lifestyle. Byrne’s patriarch was gruff at times, but also vulnerable and loving, especially toward Mary. Like Lange, Byrne also obviously internalized the character. His performance was filled with nuance in gesture and vocal inflection.

Michael Shannon imbued James’ eldest son with a sharp, biting sarcasm, expressed by his stinging, loud voice. Gallagher was just as skillful conveying his character’s tender side, making it obvious that deep down, James Jr. is a brutally honest but tender, loving older brother.
The Tyrones’ younger son is Edmund, the consumption-stricken wanderer whose sickness hadn’t been revealed to him until he was older. John Gallagher Jr., who plays the part, nicely alternated between convincing helplessness, frustration and a resolve to live, believing he merely has a “summer cold.” Shannon, as his older brother, shatters that illusion with a grave honesty. You couldn’t help but feel for Edmund and his older brother. James Jr. had to reveal such devastating news to not only his sibling, but his dear friend.

At one point, the male characters wore dark suits (Jane Greenwood designed the costumes) that made them look like they were not in a home, but a funeral parlor. The brilliant set, filled with books and what looked like a guest book, took on the appearance of a mortuary. The set included a sharp, pointy edge which jutted out into the audience. It was as though that sharp edge threatened to jab at you, just as O’Neill’s brutally honest words poked into your heart until it broke.

Part of the genius of the play, which first opened on Broadway in the late 50s, is the unflinching grimness with which O’Neill depicts the lives of these characters. He does so with a sad, poetic sensitivity and familiarity, which is not surprising. “Long Day’s Journey” is based so closely on O’Neill’s upbringing, it’s not a stretch to refer to the play as an autobiography.

Through his own suffering family, O’Neill makes you feel as though you’re not alone if your family life is troubled. At the same time, “Long Day’s Journey Into Night” can put things into perspective for you; as bad a time as you and your loved ones might be experiencing, the play can make you see the brightness that lies ahead. The Tyrones are drowning in alcohol, morphine and there doesn’t appear to be any “light at the end of the tunnel.”

The darkness, it seems, will continue on forever…kind of like that aforementioned obscured dark stairway that leads to an unseen place full of despair and bleakness.

Almost 60 years have passed since the play opened on Broadway. Revisiting the play now, with all the scary uncertainty in the world, made perfect sense.

With its power to make you empathize with the characters and feel as though you’re not alone with your problems, this play isn’t going away any time soon.
Back to Front Page Section Home