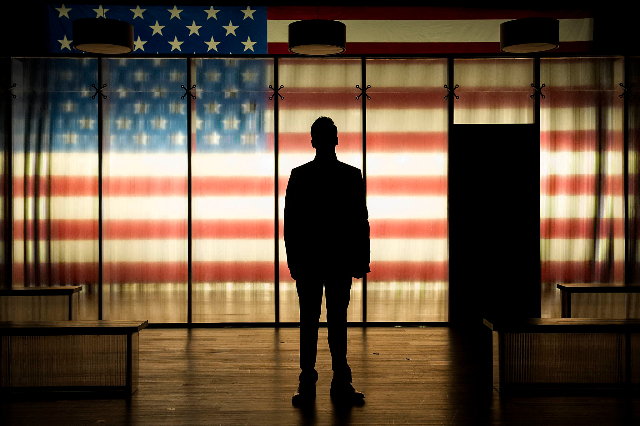 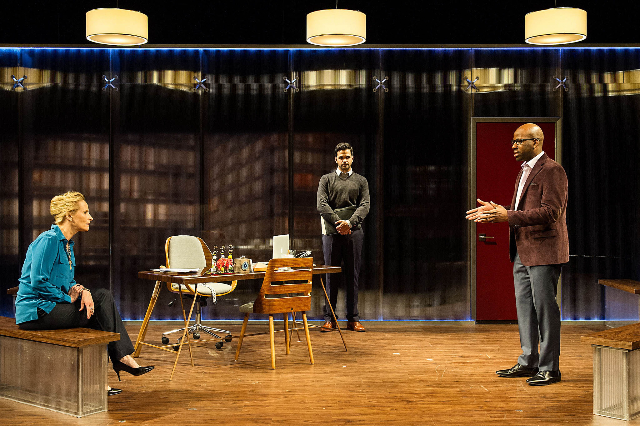 A confrontation about the future of the company. 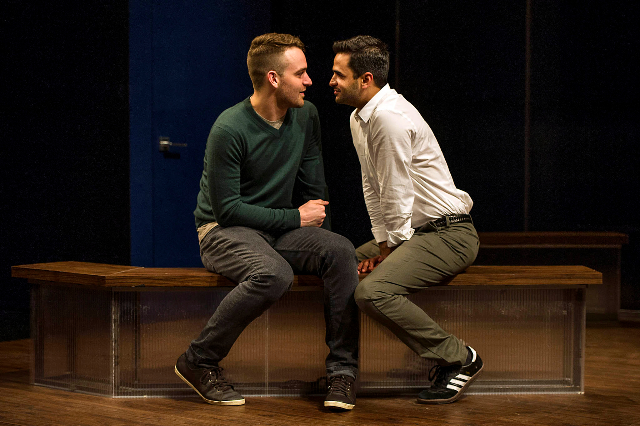 In the opening scene of The Model American, Han Jonghoon (Jae Won), addresses the audience in his native Korean. He was a non equity WTF fellow last summer when this play by Jason Kim (HBO's Girls), also Korean born, was being developed in collaboration with the director Danny Sharron.

Last summer Sharron, the founding artistic director of  Brooklyn's Ugly Rhino Productions, was the 2016 WTF Bill Foeller Directing Fellow. Taking on that opportunity he pitched Mandy Greenfield, WTF's artistic director, about creating a play with Kim. It was supported by readings and workshops with the process now coming to fruition in a technically superb production with all the bells and whistles.

There is a sleek functional set by Wilson Chin and pithy musical interludes by Brandon Wolcott during scene changes.

That speaks well for the ambition and risk taking of WTF in creating compelling new works for theatre. That mandate sets it apart from other summer programming. This season the much respected Barrington Stage Company has opted not to present new work although it has in the past.

The production is playing to sold out audiences although it features no marquee stars.

Reviews are favorable but it feels like a work in progress.

The play was being developed when the candidacy of Donald Trump was mostly a laughing matter. With its focus on immigration and pursuit of the American Dream the play has evolved from prescient to ripped from the headlines.

The main character, a Hispanic immigrant, Gabriel (Hiram Delgado), is an anti hero. With blind ambition, weaving a web of lies and betrayal there is nothing to like about him and by extension, arguably, the play itself. He has a late change of heart and confession to a young minister Cora (Sheria Irving). This, however, is out of character and not truly convincing. By then he has accomplished his version of the American Dream and is in an position to express remorse and largess.

He is one step away from that next all too common transition. How many great American charities and foundations- Ford, Carnegie, Mellon, Rockefeller, Gates, Koch- are named for ruthless capitalists?

Kim and Sharron discussed framing the work as a tragedy. In the paradigmatic definition of the genre a highborn and distinguished individual, like Oedipus Rex, is brought down by reversal based on hubris and  fatal flaws of character. They were inspired by an Arthur Miller essay which argued that a tragic character may also be low born as is their immigrant Gabriel.

In dramatic terms there is no nobility about him and hence nothing admirable in the late and marginal attempt at reversal. From start to finish there was little engaging about this smart and ambitious immigrant completely lacking a moral compass.

There is far more rectitude and humanity in Emmett (Maurice Jones), the flawed but well meaning  founder of a company selling unique crafts by third world artisans. He is committed to providing opportunities and changing lives on a global level.

Even though he quickly realizes that Gabriel had falsified his résumé, moved by fervent pleading, he offers a one week temp job. A year later he had proven to be a clever, hard working and valued  assistant.

But the business model is on the rocks and Emmett is doing blow in the office. Enter the hip and immoral business woman, Tina, who is smartly played by Laila Robins. She prevails upon him to change the business model from charity and crafts to luxury items.

Behind his back, she already owns the company, there are plans for factories and hundreds of employees mass producing those unique designs. During the coup Gabriel, snake that he is, betrays his boss and sides with Tina.

There is a messy sidebar of his user/loser relationship with a rich but lazy lover Jude (Micah Stock). He is a wannabe filmmaker, who never quite manages to put in a day's work. Once Gabriel can pay his own way, in a truly cruel and mean confrontation, Jude is dumped. It reminded me of a scene in the assassination film Day of the Jackal.

This tough play leaves us with troubling thoughts about blind ambition and the American Dream. Is there no accountability and payback for individuals like Gabriel who lack even a shred of decency?

In our bloody history there have been a lot of  guys like Gabriel. Think Rosebud or quote the Bible, the humble will be exalted and the exalted will be humbled. Well, maybe, but more likely not. Perhaps that represents the bad old days and Trump's mantra to Make America Great Again.

Empires like fish rot from the head down. The Model American gives a new stink to a familiar story.