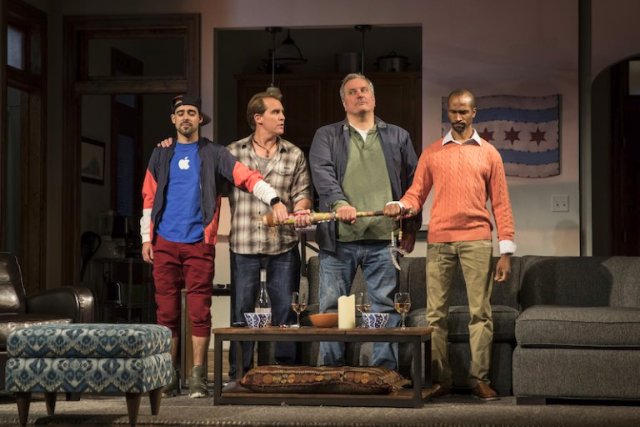 Ellen Fairey knows Chicago. She knows and replicates its sights, sounds and cultural wrinkles in Support Group for Men at the Goodman Theatre, directed by Kimberly Senior. For 95 minutes, Fairey explores current social issues and angst from gender identity to aging and loneliness, cultural appropriation, men in crisis and the #metoo movement. This takes place in mid-2017 in a second-floor Wrigleyville apartment above an alley where all sorts of shit happens.

The play opens at the regular Thursday meeting of the support group at Brian’s place. Brian (Ryan Kitley) leads the group, but everyone knows the rules. “We do not give advice on other people’s feelings or situations. And we only talk when we have the stick.” The talking stick is a baseball bat painted and strung with colored cords. Members all have Native American names, to the embarrassment of at least one.

Members of the support group are Brian and Roger (Keith Kupferer), middle-aged white guys. Delano (Anthony Irons) is a middle-aged black guy and old friend of Brian’s. (Late in the play, he tells Brian, “I don’t like being your black friend…. I was your black friend in high school now I’m your black friend in life and I don’t necessarily want to be that.”) Kevin (Tommy Rivera-Vega) is a tech guy who teaches salsa dancing. There are also two cops (Sadieh Rifai and Eric Slater), who are involved, both officially and unofficially.

The plot includes several surprises and fun plot twists, including fights and sex acts in the alley, a meditation session, and ingestion of an insanely effective Oaxacan hallucinogen.

The dialogue is fast and funny. Each actor is superbly a Chicago guy. Kupferer is especially funny and moving, and so is Jeff Kurysz as a surprise visitor. Senior’s terrific direction does justice to Fairey’s fine script. But Support Group is more than funny. It’s sad and poignant in spots and it will give you something to think about after the curtain call.

One of the most moving moments is when one character advises Roger on how he deals with loneliness.

“I know a trick for if you’re feeling lonely and you want to make it go away. All you gotta do is get on the Red line –or the Blue or the Brown, it doesn’t matter, it just has to be rush hour — people gotta be jammed in there like sardines. And you get on the train and whoever you end up next to — you just lean on them… not in a creepy way… just like a tiny bit…. And they don’t know you’re leaning on them because it’s rush hour and technically everybody’s leaning on everybody – but you’re really leaning. On another human being. And whether they know it or not, they’re helping you. And you feel less lonely.”

Chances are you may leave the theater with a slight feeling of hope in this era of darkness and intimations of doom.

It’s important to note that Support Group for Men, while sympathetic to men’s issues, is written and directed by two female theater veterans. Fairey and Senior capture masculine issues while public attention is focused (finally!) on women’s issues.

Fairey’s 2010 play, Graceland, dealt with two siblings puzzling over the death of their father. Set in Graceland Cemetery and in an apartment nearby during the Air and Water Show, it ran for six months at the former Profiles Theatre and also was staged at Lincoln Center. Her work in television includes co-executive producing USA Network’s “The Sinner” and Showtime’s “Masters of Sex.” She was also writer and producer for Showtime’s “Nurse Jackie.”

Coda: I decided I’m a committed fan of Fairey’s work as well as probably a soul sister when I read this statement in an interview. “I’m a person who doesn’t like summer or sunshine,” said Ellen Fairey, playwright and self-proclaimed melancholic. Fairey grew up in Michigan and lived in Chicago for 20 years before moving to Los Angeles to work in TV. And me? I tolerate summer as long as the temperature is below 75 and I never ever go in the sun, for fear of frying. But that doesn’t mean I’m melancholy.