A Beethoven Prelude to Action 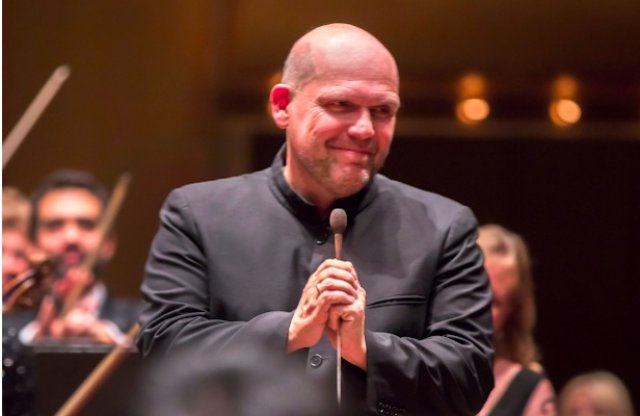 The relationship between a conductor and an orchestra, particularly one where said conductor is signing a contract to become that ensemble's music director, is a difficult thing to track. Public relations departments become surrounded by walls of silence. Questions from the media are deflected or restricted to carefully managed press conferences. With all that secrecy, one must rely on live performances and recorded documentation to assess such a relationship.

Happily, such documentation arrived earlier this year in the form of a DeccaGold recording of Beethoven's Fifth and Seventh Symphonies, made by the New York Philharmonic under the aegis of its new boss, Jaap van Zweden. He recorded these performances in guest appearances with the orchestra in 2014 (the Seventh) and 2015, long before his name was bumped to the top of desired replacements for Alan Gilbert. Each serves as a valuable snapshot of the development of that relationship, albeit in its very early stages.

Van Zweden's hiring was acclaimed as a return to more "conservative" values at the Philharmonic. A student of the conductor Bernard Haitink (whom he served as concertmaster with the Royal Concertgebouw Orchestra), he takes a sober and thoughtful approach to music making. He is also not afraid of repeating himself: this is the second pairing of these two Beethoven symphonies that he has released on disc this decade. The first was a 2012 set with his old music-making partners, the Dallas Symphony Orchestra.

So, what's to be made of these maiden voyages with the Philharmonic? The Seventh comes second on the disc, and yet must be looked at first as it is the older of the two performances. It is generally a strong, square-shouldered reading, with the orchestra dancing nimbly through the opening movement. However, what's missing is the sense of abandon, of bacchanal that made Wagner call this symphony "the apotheosis of the dance." Van Zweden's muscular approach is better suited to the following Allegretto, the famous movement trembles and shakes with power.

That energy finally appears in the last two movements, with the orchestra sounding more aggressive in the third movement and moving into Beethoven's sunnier emotional climate with enthusiasm. The energy builds with each turn of the rondo in the last movement, until it is finally, unleashed with welcome consequence. Abandon arrives in the last repetitions of the closing rondo, with the horns (led by former Philharmonic principal Philip Myers) chasing the rest of the orchestra with the playful enthusiasm of a canine pursuing a mail truck.

The Fifth was made a year later. Here the orchestra and conductor are at once more relaxed with each other and comfortable in music that these musicians can play in their sleep. And that soporific effect is present in the first movement, where the precise and familiar repetitions of the most famous four-note theme in music move with an easy predictability. The central movements are less indulgent, with a slowly tightening noose of drama. By the time the orchestra gets to the finale, they sound like they are actually having a good time. One might say the same for the audience, whose intrusive crowd noise is kept at the end of each symphony.

In the end, the fact remains that there are too many Beethoven recordings on the market, and this cycle (if it is indeed to be one) may not contribute much to the vast legacy of these ever-popular works. However, as a snapshot of a key moment in the recent history of America's oldest orchestra, and as an insight into the budding relationship of an orchestra and its music director on the eve of his first full season at the helm, it is an essential and fascinating listen. (Reprinted with permission by Superconductor).