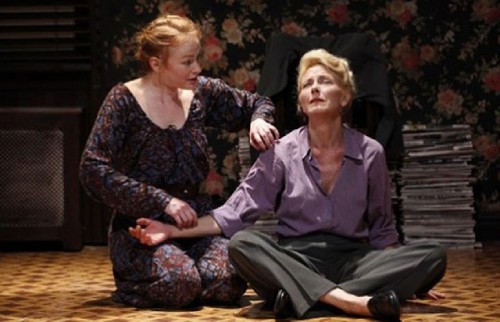 L to R: GRETCHEN HALL as Miriam Hemmerick and LESLIE HENDRIX as Raina Briar in 7th MONARCH, a new play by Jim Henry at Theatre Row. 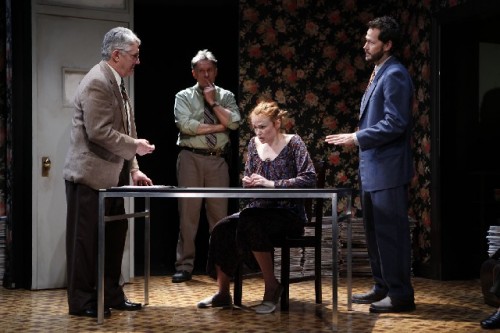 Despite 7th Monarch’s familiar storyline, seen all too often on the stage, TV, and at the movies, and a couple quirky disclosures stretched to the outer limits of believability by Chicago based playwright Jim Henry, my eyes and ears, as well as those of my date du jour, were riveted to the stage as we watched, what is something of a who done it and was it done at all, unfold bit by bit. While some silly wags could dismiss the entire production as ‘been there done that,’ I personally loved spending the time with each of the play’s five characters. It was like being with family on a good day.

The play takes place in an “average- sized town in Indiana” in 1991, and has as many twists and turns as the Cyclone rollercoaster in Coney Island. It begins mysteriously with the always wonderful Raina Briar (Leslie Hendrix) knocking on the door of Miriam Hemmerick’s (Gretchen Hall) home. After an excessive amount of mood-setting door knocking, Miriam, seen running crazily from room to room, hesitatingly opens the door and Raina’s enters. Within a few verbal exchanges, some on Miriam’s part totally unintelligible, we learn that Raina is there to investigate a possible a Social Security fraud case, and something is definitely not right in Miriam’s head.

With Miriam’s parents nowhere to be seen, the prime question ends up being, what happened to Miriam’s parents. Her answer, like much of her indecipherable babblings, “the stars went into their mouths and into their lungs and they went away in the comet,” as well as her extremely strange behavior inexplicably leads to her being thrown into jail for fraud – on the face of it the loony bin seemed appropriate – as well as becoming the chief suspect in her parents possible murder. Soon enough Miriam and Raina are surrounded by the 3 male leads, each one hoping to have the definitive say in determining Miriam’s fate.

Grey Collins (Matthew Humphreys), a caring, but mostly untried public defender is assigned to the case. Kenneth Sharpe (Michael Rupert) a self-serving judge who needs a murder conviction to boost his chances for re-election, wants Miriam convicted immediately and Leo Garnes (Michael Cullen), a world-weary detective on the brink of retirement just wants to serve out his last few weeks. This being a small town everybody has a shared history. As to be expected, each of the characters, have deeply hidden secrets, all of which reveal themselves during the course of the play.

Though all of the actors, beautifully directed by Scott C. Embler, on a just perfect, newspaper strewn, set by Shoko Kambara, turn in compelling  performances, the success of the play, both as written and need be acted, rests squarely on Miriam’s shoulders, a responsibility that Gretchen Hall,  more than lives up to. Playing what appears to be a mentally disturbed person – a cross between a schizophrenic and an idiot savant – Hall’s over-the-top, while still being sensitive, star-in-the-making performance, is just stellar.

However, the fact remains, we never really know, despite the play’s last few  revelatory minutes in which the playwright appears to be offering us an answer to the question, whether or not Miriam is a schizophrenic, your everyday idiot savant, or just half crazy. The fact that much of what she says makes sense only to herself, remembers every newspaper article she ever read – a device which rears its head throughout the play –  and likes to wear an astronaut’s helmet when shopping at the local supermarket, are just a few of the behavioral clues the playwright drops.