Vanya and Sonia and Masha and Spike in Chicago 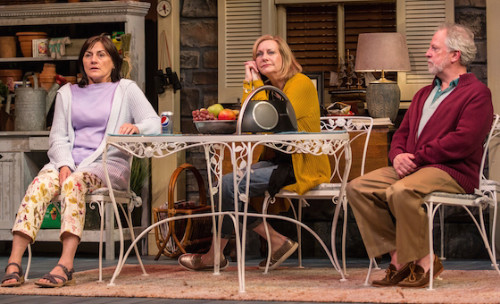 Vanya and Sonia and Masha and Spike is not a Chekhov parody, but Christopher Durang's play set in an old farmhouse in Bucks County, Pennsylvania, could have been set in a dacha in the Russian countryside. It retains much of the melancholy of Chekhov's dissatisfied characters.

Steve Scott's new Goodman Theatre production is funny and charming and much of its wit rests on the many theatrical references and stage in-jokes (fond references to Chekhov and Greek tragedies, and to theater masters such as Stanislavski and Meisner). In addition, monologues by three of its characters are compelling and humorous set pieces.

The plot centers on three 50-something siblings, all named for Chekhovian characters.

"It's been our cross to bear, that our parents gave us names from Chekhov plays. The other children made such fun of us," says Vanya (Ross Lehman). "Such was the burden of having professor parents.... Father was so angry when you didn't know something. But what 7-year-old knows who wrote The Imaginary Invalid? Father was enraged when I said Neil Simon."

Vanya and his adopted sister Sonia (Janet Ulrich Brooks) live in the old family farmhouse, subsidized by the third sibling, Masha (Mary Beth Fisher), a successful movie star, who pays the mortgage and provides general financial support. Vanya and Sonia have no careers and no future prospects. They are bored and yearn for something, but they're not sure what. (Is this beginning to sound like a Chekhov play you've seen?)

The key difference from any Chekhov play is that at the end, Vanya says "We've got to get jobs. We can't expect her (Masha) to keep sending us a monthly stipend when we just sit home doing nothing. How much is minimum wage, does anyone know?" No Chekhov character would think of getting a job. You've never heard that line--not in Uncle Vanya or The Cherry Orchard anyway.

Performances by the three siblings are excellent. Vanya's tour de force scene is a lengthy monologue in which he yearns for the past and mourns our loss of the connections we had through shared experiences. Ross Lehman is a talented journeyman Chicago actor; I have seen him in dozens of roles as a sidekick or aide de camp. It's good to see him use his considerable chops in a leading role.

Brooks' performance as Sonia is effectively cranky without being overwrought. Her performance of a one-sided telephone call with a man she met at a party the night before is a delightful mood-raiser.

Among the supporting characters, E. Faye Butler as Cassandra, the cleaning lady who has seen too many Greek plays, is a standout. Like her namesake, Cassandra predicts doom for everyone. She also is an effective voodoo practitioner, which provides a major plot point.

Jordan Brown plays Masha's hunky young boyfriend, an aspiring actor who needs no excuse to strip at any time. An aspiring actress neighbor is named (this should not be a surprise) Nina, sweetly played by Rebecca Buller. Her performance, however, could add a little more edge.

Nina helps Vanya present a reading of his play in progress. (She so admires Vanya that she asks if it's okay to call him uncle.) Vanya explains the play "is somewhat based on the experimental play that Konstantin writes in The Seagull." Only it involves the end of the world and actors playing molecules.

The play reading provides the platform for one of Cassandra's fine monologues, the weather report. In the national weather, "chunks of Florida fell into the ocean yesterday. And more chunks are going to fall tomorrow, so move to the center of the state.... And Arizona and Texas have finished their 320th day without rain and the entire two states are now on fire. And that's the weather."

Charlie Corcoran's beautiful set design, enhanced by Robert Perry's lighting, shows the rear of the large farmhouse, with several entrances and exits and three dormer windows. The "morning room" with large windows and a view of the pond serves as the main set. Amy Clark's designs for Masha's Snow White, Sonia's evil queen (as played by Maggie Smith) plus two dwarfs and a Prince Charming make a perfect costume party sendoff. Original music and sound design is by Richard Woodbury.

I'm not sure why Goodman has been promoting this as a laugh-a-minute summer comedy romp. Durang's treatment certainly contains much wit and draws the fine line between comedy and tragedy, but the opening night audience's raucous laughter throughout both acts weakened the poignancy of the characters' stories. Really, this isn't the Marx Brothers.

Vanya and Sonia and Masha and Spike continues at the Goodman Theatre, 170 N. Dearborn, through July 26, with performances Wednesday through Sundays (plus a couple of Tuesday shows). Tickets are $27-79 and can be purchased online or by calling 312-443-3800.