Listening to the Future and Preparing for What is To Come 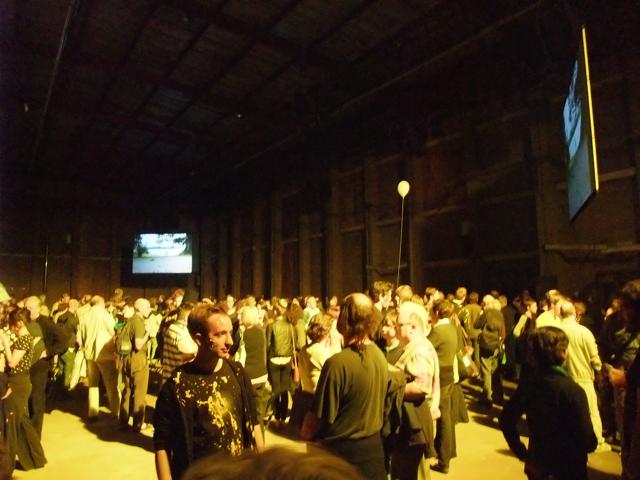 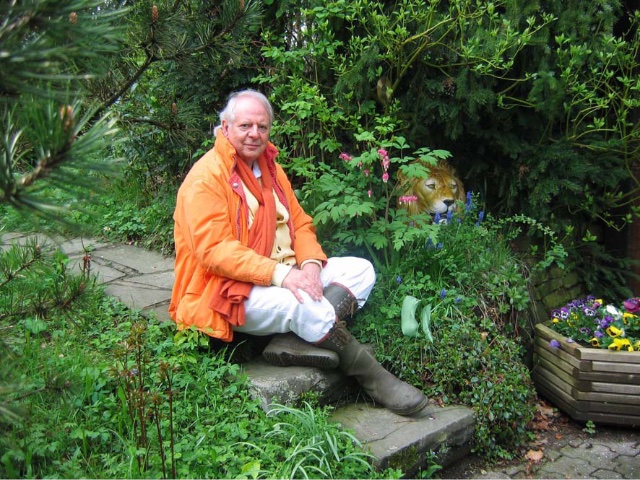 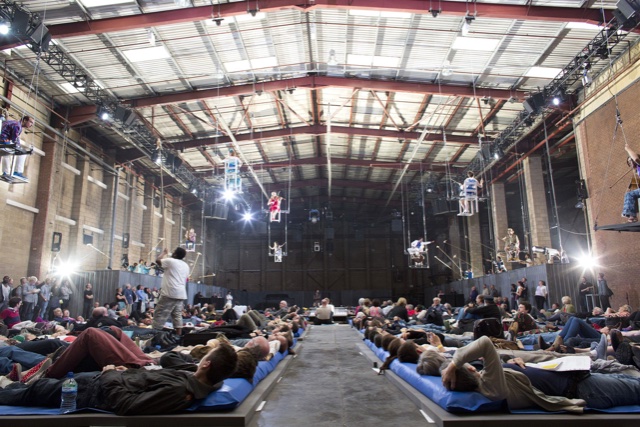 Opera for everyman and everywoman in Birmingham 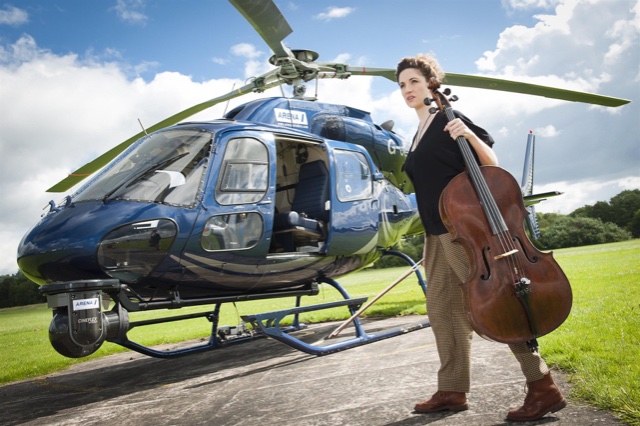 The Helicopter Quartet is not a gimmick 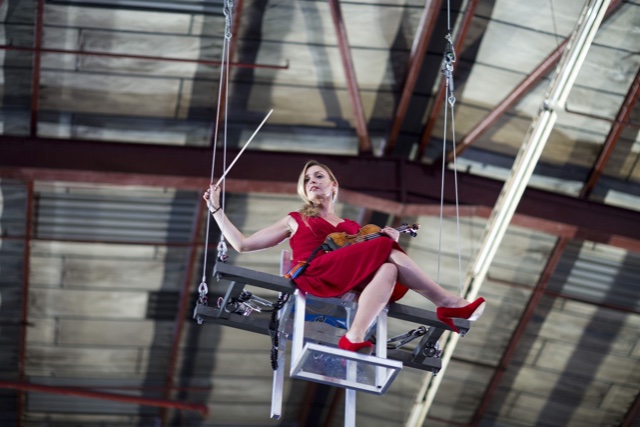 This opera has legs. 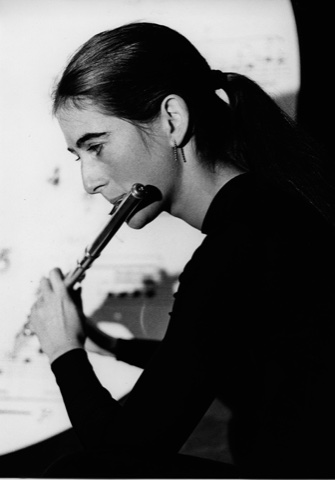 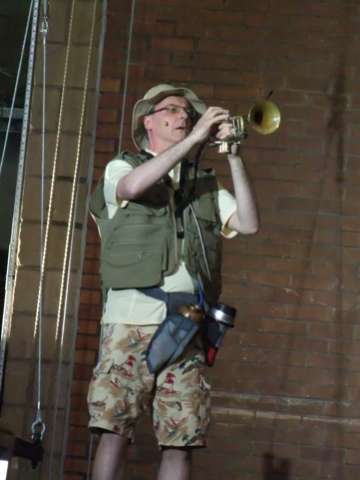 Bruce Nockles on a trumpet expedition 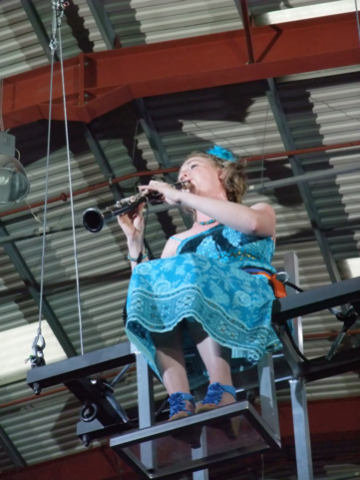 Vicky Wright on the clarinet in FInalisten 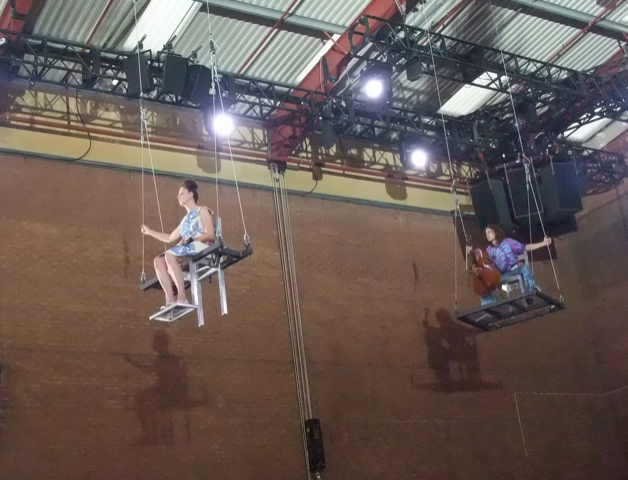 Flute and Cello scoot across the ceiling 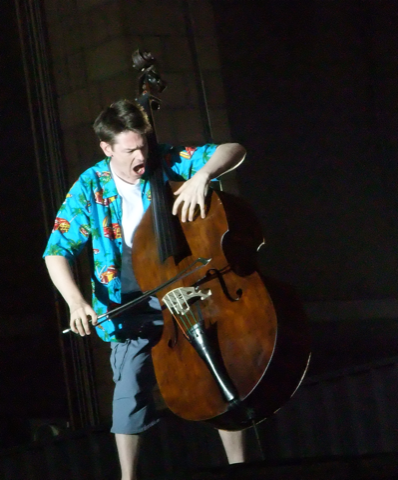 Jeremy. Watt grapples with his cello 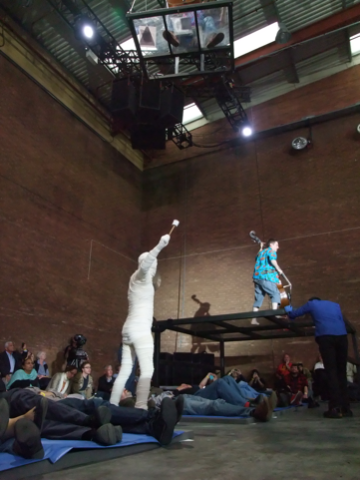 Four helicopters buzzing overhead are only one controversial element of the Birmingham Opera's world premiere of Karlheinz Stockhausen's Mittwoch aus Licht. Yes, they cost lots of money to hire and fly.  Yet the audience and the performers love them.  The kind of tweet you always want to hear from the police force accompanied the helicopters’ launch. "Don't worry about the helicopters flying over the city.  It's an opera."

Stockhausen envisaged Wednesday, the day in which we are immersed, as a day of reconciliation between Archangel Michael, Eve, and Lucifer, the devil. The work is a sonic exploration of light and love and the boundless imagination in open human beings. At one point, a man runs along with a red and yellow kite lofted behind him, like an Olympic flame. The premiere took place at the same time as the London Olympics.

The audience is periodically reminded that this is not an ordinary opera event.  A man enters to read off a license plate number and warns that the illegally parked car will be towed away.  For a moment we imagine that we are in the real world, but we realize quickly that this is in no ordinary event.

The scope of the staging is mind-boggling. Total darkness surrounds us. The audience is revealed on stools and then moves to sit or lounge on grey foam mats. They are connected to the event. Delegates from each country to the World Parliament (Scene 1) wear face masks colored like their national flags. Lush tenor Ben Thapa leads the assembly, occasionally hitting a chime. Gestures are made with constantly changing body language which at times reflects bureaucratic demands and at others, sensuality and affection. In the finale the superb London choir sings as actors bask in a golden sun. Elizabeth Drury is the only singer identified. She sings in a lovely coloratura.

In what one of the pilots describes as 'bonkers fashion', the Ex Cathedra choir perches on tennis umpire chairs at the edge of the performing space, singing a cappella. In Michaelion, a camel defecates planets, dances to a trombone as he listens for messages from the beyond. The market in Marrakesh is suggested by people riding piggyback as though they were posted on a camel’s hump.

The bits and pieces of story may be naive and the humor child-like. Yet Director Vick wisely leaves it as is. This a medieval tableau on the model of Oberammergau, a half day’s journey from the composer’s birthplace.

Vick followed Stockhausen's directions to a T.  The music director Kathinka Pasveer realized the music fully. Set in the Argyle Works factory in Digbeth, the proceedings move from one large room to another.  While the size of the space might be disorienting, its confinement serves to focus the many disparate elements and then liberate the listener.

The audience travels on film with four artists from the Elysian Quartet who play in helicopters.  In them, members of the quartet cannot hear one another. They have click tracks in their ears so that they can imagine what all four instruments sound like together. Sound and video images of their aerial playing are transmitted to the audience in the 'theater.' Afterwards, the musicians are interviewed with their pilots in humorous dialogue with DJ Nihal, a disc jockey.

Vick notes that the pilots remain to listen to the music after their work was over. They get hooked by this quartet, as we do.

The four scenes which comprise the opera were commissioned and premiered separately.  Birmingham Opera brought them together for the first time. The scenes are bracketed by an electronic Greeting and Farewell. The Orchestra Finalists scene began life in Amsterdam.  Vick has the performers hung high in chairs, moving across the ceiling and dipping up and down.  The Helicopter Quartet, as the police tweet let everyone know, is set in the sky above Birmingham.  The fourth section, Michaelion, is dedicated to the Archangel Michael.  The final message: “Mankind hear. Michael, Eve are healing the world. Lucifer will be brought around through the music of light. Blessings bring praise. Praise, gratitude for the miracle of the stars, planets.”

In our peculiar time which affords space for listening and reflection, this opera is five hours well-spent.  In other times, it might well be an occasion for a pilgrimage full of humor and mystery.