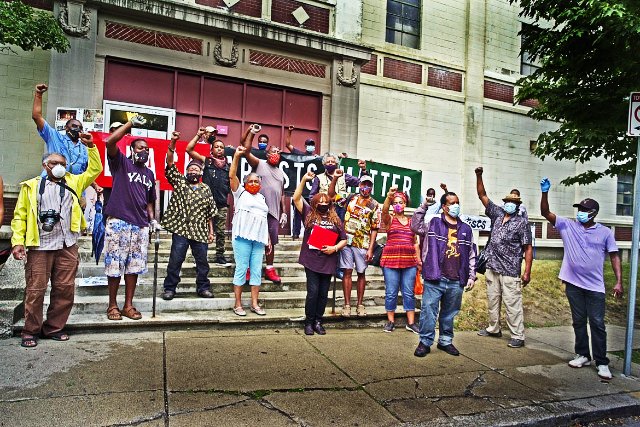 There is a long and complex history of the relationship of Northeastern University and Boston's community of African American Artists. With the pandemic there has been further reduction of the university's commitment to the artists on its campus.

“This is the promise they made to the artists,” Dana Chandler III—the son of artist, teacher and activist Dana C. Chandler Jr. who founded the African American Master Artists in Residency Program in 1978—told the crowd during the protest. “You were going to support the community of color. You were going to support AAMARP. What did you do during covid, during riots, during murders? You locked the doors. So guess what we want the keys. Give us the keys.”

The 14 artists involved in the four-decade-old residence program for Black artists at Northeastern University said the school had again locked artists out of their studios in the Jamaica Plain building and is trying to push the artists out of the facility.

On October 4, 1977, the debut exhibition of the AAMARP was sponsored by the Mayor’s Office of Cultural Affairs and held at City Hall’s former Main Gallery. In its first year, the program welcomed approximately 3,000 visitors, including children from local public schools who created their own art at the studio. AAMARP also helped sponsor exhibitions of the works of individual artists, including Arnold Hurley (painter schooled at Tufts University, where he received his MFA at the School of the Museum of Fine Arts, Boston), Milton Derr (figurative painter and draftsman who has taught at the School of the Museum of Fine Arts and Tufts University for 30 years), and Rudy Robinson (photographer)