Classic Grace is Followed by Premiere of Mercy 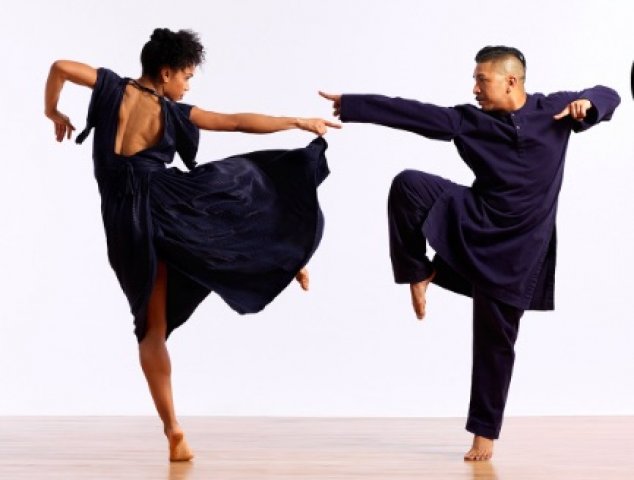 Grace and Mercy by Ronald K. Brown at Bard's Summerscape

God is not taken out of the equation is the choreographer Ronald K. Brown’s work.  Yet he tells the story of a person coming to see his dance works and declaring at entrance, “I am an atheist.”  Leaving, “Is it okay for me to feel better?” Call and response are seldom so far apart, but often connect the dancers and the audience in Brown's choreography.

Brown’s classic Grace was mounted in the Sosnoff Theater at the Fisher Center of Bard.  For the first time, accompanying music was live, an adaptation of the tapes usually run with the dance.  Grace was followed by a world premiere of Mercy, a work commissioned by SummerScape at Bard among others.  Grace is of course a blessing given us undeserving mortals. Mercy is punishment withheld, even when a person deserves it.

In William Blake’s beautiful poem The Divine Image, we are told that like peace, pity and love, mercy has a human face.  In Brown’s story telling, God comes to earth, and she blesses and reprieves mere mortals.  Atrocities growing out of religion blanket the globe.  Brown’s point is that its very precepts can create community and heal.

These thoughts are lofted by dancers without words, unless they are sung in accompanying song.  Duke Ellington’s "Come Sunday" brackets Grace.  What goes on within the brackets and also in Mercy is electrifying movement.  Rooted in the ground and reaching for the heavens, bodies rotate, gyrate and sizzle.  We see not so much the release of energy in form, but the possession of the body by outside forces.  Shimmering, shaking, sometimes subtly and at others with violence, we feel possessed ourselves.

A foot lifted off the floor, with knee bent, is determined.  Gentle backbends suggest the kind of power Brown likes: soft power.

In a tall doorway, lit intermittently in gold and red, serves as the entrance way for God. Lighting by Brenda Gray and Tsubasa Kamei is as theatrical and apt as the setting by Kamei.

God is with us at the beginning and end of Grace.  Her lovely liquid movements are at the same time firm. Dancing actors express anguish, taut contractions and urgent head rolls resist and defy. Arms brandished overhead plea. Yet God's presence is felt even when she exits the stage.  The troops follow her at the end.  We imagine that they have died and are heaven bound, not because life on earth has been lived with a pure purpose, but because she has graced us.  Processions root the choreography in classic forms.

Live music is textured like the dance movements. Dance to an insistent rhythmic bass, pitch alterations and unexpected counterpoint make the both the pain and the joy of human experience visible.  Gospel, and the new compositions of Meshell Ndegeocello, inhabit the dancers and are mysteriously transferred to us in both gesture and notes. It is this shared physical experience that forms community.

For more than 30 years Brown’s Evidence company has used a mix of Afrocentric movement and modern dance to make spirituality not just a notion we receive, but something living and healing; vibrant and transformative.