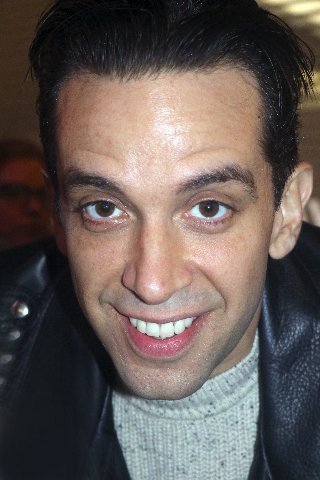 Tony Award-nominated actor Nick Cordero, an imposing and beloved Broadway performer who played tough guy roles in musicals such as Bullets Over Broadway, Waitress, and A Bronx Tale, has died following a lengthy and grueling battle with the coronavirus.

Over the past few months, his wife, fitness trainer Amanda Kloots, chronicled Cordero’s condition on Instagram. She requested prayers, positive vibes, and a daily dance to her husband’s song, “Live Your Life,” with the hashtag #WakeUpNick.

“I am in disbelief and hurting everywhere,” Kloots wrote on Instagram. “My heart is broken as I cannot image our lives without him.”

Cordero became ill on March 20. Although doctors at first diagnosed him with pneumonia, physicians at a Los Angeles hospital eventually determined he had the coronavirus. Doctors put the performer on a ventilator after a day in intensive care. He lost consciousness in the unit on March 31. Cordero responded to medication. However, a problem with blood flow to his leg prompted the need for surgery. Doctors ultimately had to amputate his right leg. Cordero fought for his life with various medical issues, possibly complications from COVID-19, up until his death.

“God has another angel in heaven now,” Kloots wrote in an Instagram post. “My darling husband passed away this morning. He was surrounded in love by his family, singing and praying as he gently left this earth.”

Cordero was born on Sept. 17, 1979 in Hamilton, Ontario. His Broadway debut came in 2012, when he played Dennis and Record Company Man in the Tony-nominated musical Rock of Ages.

Then, Cordero created the role of a gangster named Cheech in 2014. The character is a tough, tap-dancing theater fan in the Woody Allen musical Bullets Over Broadway.

“New York Times” co-chief theater critic Ben Brantley, in his review of Bullets, wrote that “Mr. Cordero never pushes for effect, even when he’s leading a homicidal dance number to ‘Tain’t Nobody’s Biz-ness if I Do.’ And somehow, this dopey, mass-murdering thug and the actor playing him stand out as being far more endearingly earnest than anybody else.”

Also in 2016, Cordero  created the leading role of Sonny in A Bronx Tale: The Musical. The stage show is based on Chazz Palminteri’s book, film, and solo show about growing up on the rough streets of the Bronx in the 1960s. In his “New York Times” review, then “Times” critic Charles Isherwood opined that “the terrific Mr. Cordero radiates a cool charisma that mixes a surface geniality with shrugging ruthlessness.” Again, the Drama Desk recognized Cordero’s performance with a nomination for Outstanding Actor in a Musical.

Two years later, in 2018, Cordero played sadistic dentist Orin Scrivello in the Broadway Center Stage production of Little Shop of Horrors at the Kennedy Center for the Performing Arts.

Cordero’s many theater credits include Off-Broadway’s The Toxic Avenger and Brooklynite, the first national tour of Rock of Ages and regional productions of The Toxic Avenger and Pippin. On television, Cordero portrayed Victor Lugo on the series Blue Bloods, as well as Mob Town, Inside Game, Law & Order: Special Victims Unit, Going in Style, A Stand Up Guy, Lilyhammer, Don Juan, Apartments at 254, and Queer As Folk.

Later, Cordero and his family moved to Los Angeles. There, the actor starred in Rock of Ages. It is the musical that marked his Broadway debut.

In addition to his accomplishments, Cordero was apparently much-loved in the Broadway community and beyond. The following comment from a young actor is one of many that have come pouring in following Cordero’s death.

“Nick Cordero was a living legend and true Rockstar. He was the coolest guy you could ever meet or want to hang out with! I was so lucky to share a stage and learn from him. I ran into Nick back in March on the streets of NYC and per usual he had some wise words to share with me and had me make a promise to him! Nick I will keep that promise and I will never forget you and the impact you had on me! Our entire Broadway community is saddened tonight but we will keep your memory alive forever!”

Cordero met his wife during their time in Bullets Over Broadway. She survives him, as does their son, Elvis Eduardo Cordero. He was born in June 2019.