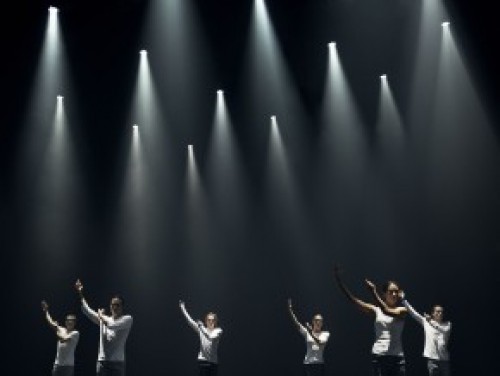 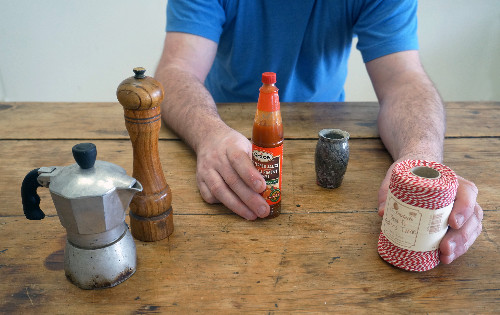 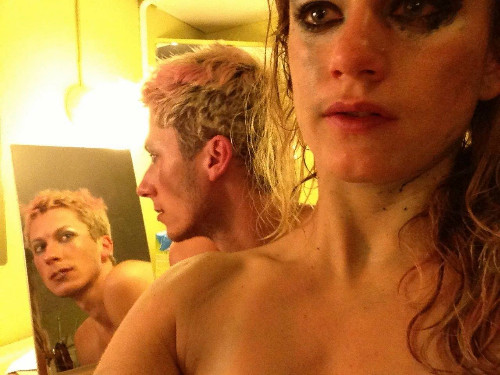 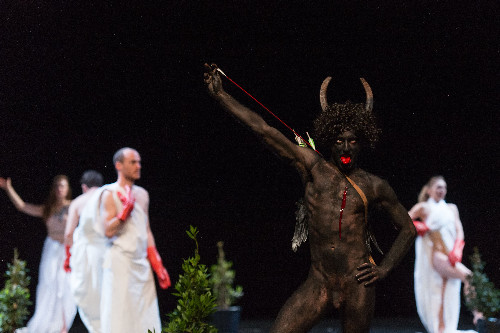 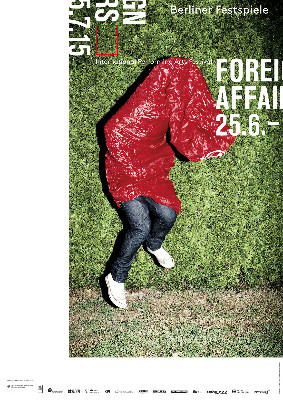 An amazing festival just finished at the Berliner Festspiele in Berlin. The fourth edition of Foreign Affairs seemed foreign yet familiar to the audience and posed challenges. From June 26 through July 5, a predominantly youngish crowd both cherished and disdained and ultimately accepted the excessive treatment of time, space and subject matter on the grounds of the Berliner Festspiele. Subtitled, International Performing Arts Festival, it combined all aspects of the performing and visual arts into a Gesamtkunstwerk (Total Artwork) that stimulated the senses. It included trashy and pornographic aspects, overindulged in festivities for all and, at times, brought audience and performers to the limits of their endurance. The artistic director, Matthias von Hartz, had dared to select companies and performers that undermined and altered the common understanding of a theater festival, or, as in Jan Fabre's 24-hour performance  Mount Olympus to glorify the cult of tragedy brought it back to classical Greek dimensions – in regard to the treatment of time and interaction between the public and the actors.

Mount Olympus would have been one of the most amazing events for any festival, and this world premiere of the Belgian director, choreographer and visual artist Jan Fabre definitely topped the offerings of the Berlin Festival that seemed to be hell-bent on tearing down established boundaries between genres and viewers. He and the 27 actors of the Troubleyn Company reintroduced the foibles of ancient Greek gods, focusing on their Dionysian excesses, pornographic indulgences and satirical overtures. As Fabre stretched theatrical time into a 24-hour marathon, thus altering the relationship between actors and viewers into a bacchanal of survival for all, the entire event seemed to ironically parallel the political development in modern day Greece, but with a different outcome. Where the finality of the Fabre event brought all involved close to a catharsis, nowadays Greece keeps the world hoping for an acceptable outcome. At the Berliner Festspiele, actors and viewers survived together due to sleeping locations throughout the premises, food and drink stations, other entertainment outside the theatre hall, and the final satisfaction to have made it through.

This festival within the festival was able to build on the innovations of another famous group, also represented at this year's Foreign Affairs - the British performance group Forced Entertainment. This group had experimented since 1993 with 'durational performances,' a term denoting prolonged time lines of theatrical performances, at instances lasting up to 24 hours. In Complete Works: Table Top Shakespeare, the opposite approach is taken, time was reduced. Tim Etchells, one of the founders of Forced Entertainment, had created another investigation into the use of time and theater. The company performed their world premiere of the entire 36 works of Shakespeare, each work reduced into a 45 minute plot, over nine  days. It turned out to be a most wonderful experience, each work being narrated by an actor, compressing Shakespeare's plays into intimate narrations, a technique known to men since ancient times. New and incredibly convincing was the transfer of action within each play into a table top show-and-tell demonstration using ketchup bottles and other kitchen paraphernalia to denote queens and kings and all characters in Shakespeare's universe. Where Fabre's was the most exhausting treatment of theatrical time, Complete Works – 36 Shakespeare Works in 9 Days, the Etchells reduction of time and action into a minimal narration, stunned and pleased all and swept the audience off their feet.

All other events and presentations caused a raft of pros and cons among the festival goers that seemed to have taken over every nook and cranny of the Berliner Festspiele compound, including, the gardens, and sections of the parking garage. A continuous coming and going throughout all events was the norm. It was part of the bar like setting for  U.S. Girls by the US singer and artist Meghan Remy, and even happened at the concert by Dillon, the Brazilian-born Dominique Dillon de Byington.

Walking and talking was the vehicle of interaction between lay actors and the festival goers at This Progress, an interactive performance created by the world renowned choreographer Tino Sehgal, who has elected Berlin as his home. The topic progress was chosen as the theme for the production. A walk through the grounds of the Berliner Festspiele was chosen. Here, Sehgal had the audience interact one by one with an actor who represented one of four generations in ascending age groups that drew the visitor into a discussion on their view of progress. A second Sehgal work could be experienced at the inner court yard of the museum Martin-Gropius-Bau for a 5-part sound and movement performance throughout the opening hours of the museum. It was perceived as uneven, at times stunning, then also laborious.

Definitely stunning but equally laborious were the installation marathons The Fall by Icelandic artist Ragnar Kjartansson at the main stage of the Berliner Festspiele, where during eight hours a five minute installation repeated the rise and fall of a mattress on stage, and his six-hour long video A Lot of Sorrow on a musical performance from New York City's MOMA at the famed PS1 space.

Two other offerings of considerable importance caused sensual and tangible resentment as well as conceptual acceptance. One was the focus on the Spanish director and actress Angélica Liddell with her Atra Bilis Teatro. The German premiere of You Are My Destiny, was a dance investigation into the raping of Lucrecia by the Roman Tarquinius. It was stylized into a wordy monologue by Liddell culminating into the thesis that Tarquinius was the only true lover ever. The entire evening turned into a melodramatic show topped by a final orgy on stage that allowed Liddell to scream all her frustrations at the audience.

The breathtaking dance performance of Hofesh Shechter newest show Barbarians seemed almost conservative within the endless activities created throughout the festival. The troupe danced the three part show in an almost too slick perfection. Yet, it was a pleasure for the senses to see the dancers move so stunningly through artificial smoke and ear shattering syncopation of the music. Only an interview with Shechter, stating his insecurity and equally God-like rule over the ensemble, created a discord. There was no need for more notoriety, since the Israeli choreographer is coveted at most international dance festivals and venues. He is a frequent guest at Foreign Affairs and has also worked at the New York Metropolitan Opera.

Another famed group, Jan Lauwers and Grace Ellen Barkey's Needcompany from Belgium opened the festival with A Time Between Two Mistakes. It was a tongue-in-cheek allusion to Peter Brook and his famous book The Empty Room as well as a light hearted and a little dusty medley through their 30 plus year repertoire. It set the tone for the entire festival, which offered an open forum for the audience: to participate, enjoy to hate, arrive at new conclusions or to hang out. Just like in the Olympic festivals of Greece! What was missing though was social engagement – or has it gone out of style with the 20th Century? And, is this progress?