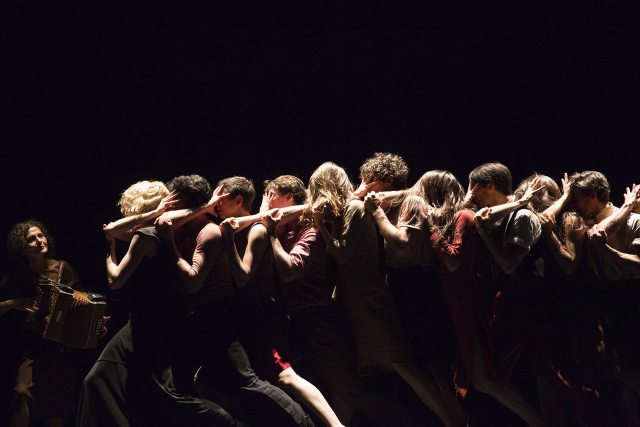 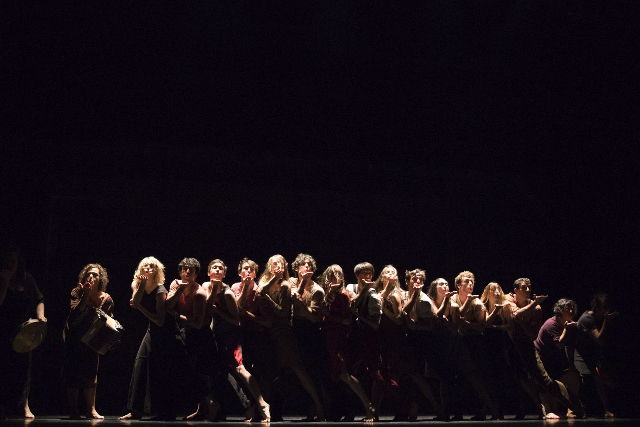 While rooted in traditional ballet under artistic director Eric Gauthier, the founder of a nine-year-old company based in Stuttgart, the five positions have been expanded beyond five, or even the seven of Serge Lifar, to some 101 but who's counting.

Add to that an extensive and inventive vocabulary of upper body, arm and hand movements. This is a company that feels inventive, expressive, and endlessly full or adventure, fun and surprises.

After a smash run in the smaller Doris Duke Theatre last summer the company was invited back to the larger Ted Shawn Theatre. Last night we enjoyed a sold out performance that thrilled and delighted the audience.

With the first pas de deux Floating Flowers by the Taiwanese choreographer, Po-Cheng Tsai, we came to expect the unexpected in the inventive program.

A single woman with a large, white, traditional gauze skirt accompanied the music while confined to upper body, arm and hand movements. This was sustained for some time.

Gradually she began to rise higher and ever higher. There was a shock to see that she was in fact supported by a male dancer hidden under the voluminous skirt.

Seemingly on stilts with an elongated form she, actually they, cavorted about in a parody of traditional ballet. She could have been one of the chorus of swans after Tchaikovsky. There was a discerning sense of fun in this spoof.

Eventually they separated revealing the male dancer, or designated heavy lifter, also in a white skirt. Now and then they flipped up their skirts to reveal skivvies with and without you know what.

That sense of the andyrogynous or role reversal was given another perspective in the evocative, erotically charged Now and Now which followed.

Under a strong, probing, single light the supine body of a male dancer, clad in a black suit with no shirt, began to writhe about. He was joined by a tall, stunning blonde woman in a black dress.

With steamy passion they began to make love while deftly doffing their clothes and simulating copulation. They then dressed in each other’s clothes. That came with a technical challenge as they had to be the same size.

She looks quite natural and anything but mannish in his suit. While wearing her simple shift he was at best odd and puzzling. The dance, though absorbing, was best not to be taken literally.

The third pas de deux was a comical take on the mambo set to the 1950s novelty hit “Cherry Pink and Apple Blossom White.” This was an instrumental version of the song that I recall being sung by Snooky Lanson and Gisele MacKenzie on the popular Saturday night show Your Hit Parade.

Here it was a silly mambo with a nerdy guy in glasses and slicked back hair and his game but feisty dame. The chorus with that signature, growling, bobbing and weaving trumpet solo went on and on.

The horsey set prevailed in the final of four dances during the first part of the program. The company for Conrazoncorazon was outfitted in matching shorts, shirts, long black stockings and rider’s helmets.

They pranced about as ersatz jockeys. The piece started in darkness and alternated between boys and girls with the sexes occasionally combined in an equestrian manner. The music was varied and brassy. We were surprised to hear the theme of  “Mission Impossible.” What fun to see it set to dance.

We came back from intermission but then waited and waited. The audience became impatient and there was intermittent clapping and stomping.

Eventually, Gauthier appeared and explained that the delay resulted from a dead microphone for one of the four singers. “Without it the dance doesn’t work” he explained.

But even with the functioning microphone the success of the dance evoking a poor neighborhood in Naples was  questionable.

Unless you were fluent in Italian it was difficult to follow the intimate relationship between the singing of traditional folk music, passages of the spoken word, and an often jumbled spectacle of dance.

The tattered costumes (Helena Medeiros) of the women, with repaired rips and tears, signified poverty. And perhaps explained some of  the sexist, macho behavior of their crude male partners.

In one segment the men dumped the women, one by one, until they formed a heap of twisted bodies on the stage.

While Cantata was evidently a period piece there was less than pleasure in viewing this abuse of women and their traditionally subservient responses.

Overall the first half of the program was terrific while the second was not so.

It was interesting to note that the company which is based in Germany was broadly diverse both in its dancers and choreographers.

We will anticipate their future appearances at Jacob’s Pillow.