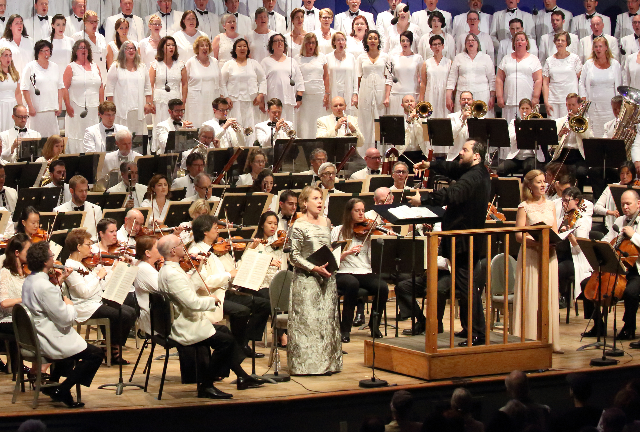 Last night marked the official opening night of the Boston Symphony Orchestra in residence at Tanglewood.

Bearded and wearing a flowing loose, black silk shirt, with the orchestra in formal white, Andris Nelson, was fluid and expressive leading the massive ensemble of musicians and chorus seemingly filling every inch of the vast stage.

For Nelsons and the BSO the performance of  Gustav Mahler's sublime, mystical, poetic and powerful Symphony No. 2 in C Minor proved to be physically and emotionally exhausting.

After the first movement "Allegro  moderato. With complete gravity and solemnity of expression"  he took a seat and taking a breathe appeared to be leisurely chatting with musicians. Perhaps he was just gathering the energy necessary to sustain through the roughly 90 minute performance.

There was feline grace in his attack of the music. At times he evoked soft, moody sustained passages with restrained but precise gestures. Then he lurched forward as the dynamics shifted into sharp attack mode with sharp, thunderous percussion explosions.

With some irony the thunderous music in the Shed echoed inclement weather soaking listeners huddled under umbrellas on the lawn. Over the years we have experienced many such instances when visiting Tanglewood.

While the performance of classical music by the BSO marked the official opening night it is preceded and followed by ever more densely programmed shoulder seasons. The Fourth of July celebration of local artist, James Taylor, followed by fire works is by now a tradition.

The preseason also included two nights of the Mark Morris Dance Group in Ozawa Hall, including a world premiere, as well as evenings in the Shed with Boz Scaggs, John Mellenkamp with Emmy Lou Harris, and a marathon during another drenching evening with Natalie Merchant.

Later in  the season we anticipate Sting, Dianna Ross and Pete Townshend.

While making concessions to broader appeal through ever more varied popular artists the heart and soul, as we are so often reminded, is the music of the majestic BSO. It has a long history as a magnet for cultural tourism, the primary industry of the Berkshires.

With the health issues of former music director and conductor, James Levine, for troubling years the orchestra lacked leadership. There were too many favors called in with last minute substitutions. With Levine off campus there was a hiatus in his important educational role primarily the development of singers and conductors.

That has always been an issue. Levine was unique in the extent of his commitment to the Tanglewood Fellows but then he got sick. Vividly one recalls a Monday night performance of Don Giovanni in a rehearsal building during a monsoon. Even the orchestra pit was flooded that night but nothing dampened the spirit and memory of a thunder struck performance.

After extensive global search, and a bit of arm twisting luck, the BSO hitched its wagon to the rising star of Andris Nelsons. Like other superstar conductors that equates to demand and constant travel. This season will mark his most extended stay and he will perform Wagner here rather than at the Bayreuth Festival.

That event is much anticipated.

On Saturday, July 15, Nelsons leads the BSO in one of the great highlights of the 2017 Tanglewood season: the festival's first-ever complete concert performance of Wagner's epic Das Rheingold, the first of the four dramas from Wagner's masterpiece Der Ring des Nibelungen. The performance features a cast of all-star vocal soloists including bass-baritone Thomas J. Mayer.

This event is being described in terms of never before and likely never again.

The youth, artistry, insight and passion that Nelson's brings to demanding performances by Mahler and Wagner was evident last night particularly in the Resurrection soloists and chorus that ends the symphony.

Even though then relatively young Mahler was touched by the dark and tragic particularly his transcendental speculations of a life after death.

When Bernarda Fink, mezzo-soprano rose to sing "Ulricht" from "Des Knaben Wunderhorn" Nelson, seemingly drained, slumped back supported by the railing around the podium. There was mesmeric synergy between them as he evoked the music from her while shaping the orchestra and enormous chorus. He was back on his feet for the segment of soprano Malin Christensson. At first she sung so softly that one could barely distinguish her from the chorus. That changed with an appropriately passionate emotional arc.

During the applause that followed Nelson's appeared to be as thoroughly drenched as the brave souls on the lawn. It was yet another Tanglewood evening that we will long cherish and remember.