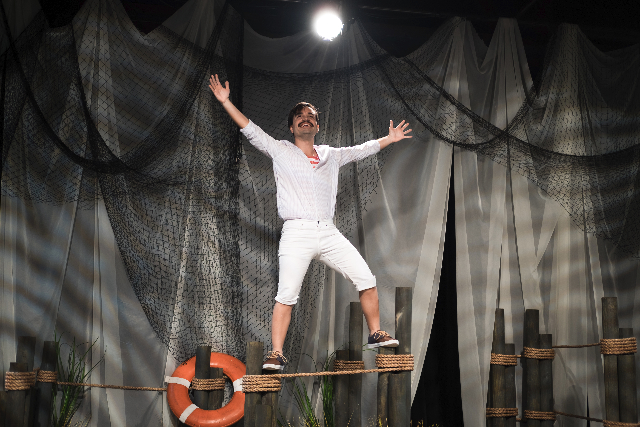 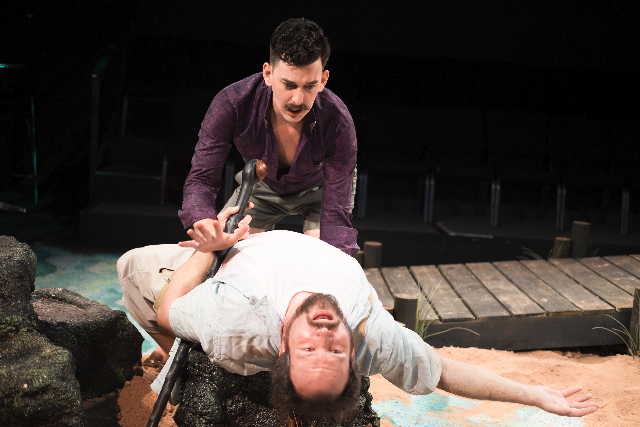 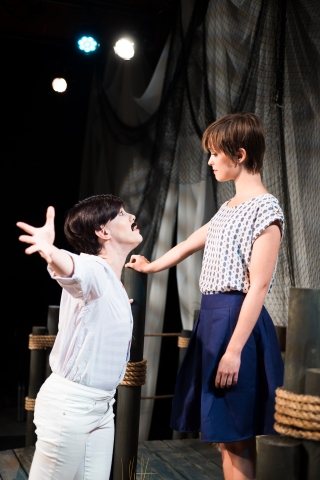 Shakespeare’s Twelfth Night is classified as a comedy, and for good reason. There’s plenty of mischief and merry making, which merge to form a frolicking night of theater. It ends (mostly) happily. But there’s a darker side to the play involving mourning, unrequited love and a resultant lovesickness. If you dig deeper, you might unearth a message about bullying and how it can affect people.

New City Players’ exuberant and invigorating  production set “some time ago” nails the comedic aspects of the play.

When it comes to Twelfth Night’s darker aspects, the production, running through July 23, in the extremely intimate Vanguard Sanctuary for the Arts in Ft. Lauderdale, achieves mixed results.

Director Jessica Schulte’s vigorous, highly physical direction milks all the horseplay, mistaken identity and pranks for all the comedy she can squeeze out.

The skilled comic, highly-charged ensemble work of the actors will whisk you away from this troubled world of ours for about two-and-a-half hours.

The intimate Vanguard space will make you feel like not just an audience member, but a participant. When Sir Toby Belch, that rowdy, drunken but lovable trickster bellows something, you’ll feel as though he’s talking to you, as much as to his fellow pranksters. That’s because the actor playing Sir Toby with volcano-like force, JohnBarry Green, more than once makes eye contact with us as words spill from his mouth.

Green, like his fellow castmates, not only speak Shakespeare’s language with ease, they obviously understand what they’re saying. They create believable characters and demonstrate impressive comedic timing and energy without forcing it.

Green, Ryan Maloney as Sir Andrew Aguecheek, and Elizabeth Price as Maria, are as disorderly as a bunch of caffeine and sugar-overloaded, hyperactive students taking advantage of an excitable, clueless substitute.

It would be interesting to learn what the noise level is on stage if director Schulte placed a decibel meter near the actors.

Technically, the title of the play is Twelfth Night or What You Will. This, perhaps, reinforces the notion that everybody will experience this Shakespeare comedy (1601-02) differently. The full title could also suggest that love is personal; everybody experiences it differently.

The play takes its title from the twelfth night of Christmas, an evening when the pagan rite “Feast of Fools” was observed during Shakespeare’s time. It was a time for parties and “inverted standard hierarchies (and) overturned social orders,” according to Leslie Dunton-Downer and Alan Riding in their guide “Essential Shakespeare Handbook.”

It’s fitting, then, that a disguise plays a prominent role in the play.

There’s no hiding the fact that Orsino, Duke of Illyria, is lovesick for rich countess Olivia. But in the production, there’s little hint that Orsino (a rather care-free, dashing Robert Fritz) is desperately, hopelessly in love. Fritz utters the passage “If music be the food of love, play on…” in a curiously informal manner, rather than a pleading voice. The choice of music to precede  the line is sung and played to the melody of Elvis Presley’s “I Can’t Help Falling in Love with You.” It’s a wise choice, considering the mood the song evokes with  its lyrics.

Olivia can’t fall in love with Orsino; she’s committed to a seven-year mourning period for her late brother. Jenna Vanweelden gives us a spirited Olivia, but she needs to convey more of a sense that she’s grieving.

Viola, who gets shipwrecked on Illyria, mourns for her supposedly drowned twin brother, Sebastian, in a different way. She busies herself as a youthful male page to Orsino, and in this capacity, Erica Rose Dade endows the “youth” with precociousness and confidence. Before she disguises herself as a male, Dade conveys a hint of sadness as the undisguised Viola.

Obst’s clown, walking confidently about the stage, strums a ukulele to accompany her clear singing of mood-appropriate music. She invests the clown with plenty of wit, while remaining true to her character who, like many Shakespearean fools, ironically seem wiser than the other characters. Oddly, Obst is the only cast member to speak in a British accent.

Price invests Maria with a class-clownish, rowdy personality that makes her “one of the guys.” Price’s naughty Maria is quick to tease and slow to think about the consequences, if she thinks of them at all.

Sir Toby, Maria and Sir Andrew Aguecheek (a daffy Ryan Maloney) target the quick-to-react Malvolio as their target for much fun and ridicule.

Reilly plays the irascible, Scrooge-like Malvolio with expressive, wide eyes that communicate, at turns, irritation, severity, surprise, delight, confusion and a melancholy air. Reilly, who’s excelled in a variety of roles in South Florida theaters, expertly modulates his voice to convey the character’s varied emotions. Reilly also finds the vulnerability in Malvolio’s character that turns him into a King Lear-like, semi-tragic figure.

Can you blame him for being frightened? His tormenters locked him in a dark, underground enclosure, with spider webs serving as bars and a log blocking the exit. The dark space is part of scenic designer Ryan Maloney’s striking set, which captures the dual personality of the play. A beach with plenty of sand provides the perfect environment for revelry and horseplay.

Just as the play has light and dark moments, so do we. On the one hand, we might sympathize with Malvolio. Or, the schadenfreude in us can make us delight in the suffering of this grouchy old man’s pettiness.

Reilly, who gives equal weight to Malvolio’s irritability, eccentricity and vulnerability, leaves it up to us as to how we view the character. Reilly’s performance offers us a kind of “what you will” chance to make up our own minds, befitting the subtitle of the play.

Twelfth Night continues its run at Ft. Lauderdale’s Vanguard Sanctuary for the Arts through July 23. Talkbacks with the actors and creative team are scheduled following the July 9, 16 and 23 performances. Show times are at 8 p.m. Thursdays-Saturdays and 2 p.m. Sundays. Ticket prices are $20, $30 and $35, except for Thursday performances, when tickets are $20 and $25. To purchase tickets, log onto www.newcityplayers.org or call (954) 591-0818.