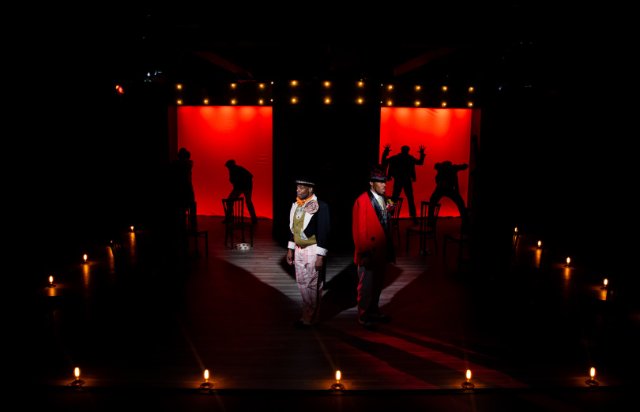 The case known as The Scottsboro Boys was a terrible miscarriage of justice that reflected our nation’s racial prejudices. In 1931, nine black boys – most under 17 and strangers to each other – hopped a freight train to head to Atlanta to look for work or connect with family. In Scottsboro, Alabama, two white women (prostitutes) accused them of rape and the nightmare began. Though it became a cause célèbre for northern liberals, the boys were found guilty in multiple trials. While some were released and others paroled, the end was tragic for each of them.

This is hardly what you might expect of a musicalKander & Ebb used a seedy Berlin cabaret to frame Nazism and its rise in their musical Cabaret. Vaudeville told the story of two attractive young murderesses in Chicago. They told the story of the Scottsboro boys using a minstrel show with its racist stereotypes.

The Scottsboro Boys is getting a terrific production at Playhouse on Park through Aug. 4. Previously the show won acclaim, nominations and awards off-Broadway, on Broadway, in London and other places.

Admittedly, the story isn’t pleasant for Americans to see. Their Cabaret was set in Berlin. Chicago  was about manipulating the justice system, and their third political musical, The Kiss of the Spider Woman, was set in South America. These boys were prosecuted because of their race.

The show begins with a typical minstrel show opening: the white interlocutor and his two side men: Mr. Bones and Mr. Tambo in exaggerated costumes perform the opening number, “Hey, Hey, Hey, Hey!” joined by the remaining company.

But when the interlocutor (Dennis Holland, the only white cast member) says they will perform the story of the Scottsboro Boys, the rest insist that this time “tell the truth”.

They takes us back to the beginning of the story: the boys on the train and the initial encounter with the sheriff and two women accusing them.

Ivory McKay (who plays Mr. Bones) and Torrey Linder (Mr. Tambo) become many of the characters in the show. This includes the sheriff and deputy, the first inept lawyer, the guards, the Alabama attorney general. Later therr is a New York Jewish lawyer sent to defend them in subsequent trials. Other cast members play the two “rape” victims and other characters.

If McKay and Linder highlight the stereotypes in these white characters, including prejudice against New Yorkers and Jews, the heart of the show is Tray Valjean Rucker as Haywood Patterson. He was one of the older boys and becomes both leader and rebel. He tries to escape multiple times.  Rucker gives Haywood quiet dignity. His strong voice puts over some of the moving songs in the show including “Nothin’,” “Make Friends with the Truth,” and “You Can’t Do Me.”

But the other “boys” are also excellent. I’d single out Jaylan Evans who plays Ruby Bates and Grant Reynolds as the “victims,” and Justin Sturges as Billy, as well as Trishawn Paul as Little George.

Dennis Holland as the interlocutor plays the judge and the Governor of Alabama. The performers are backed up by a fine eight piece ensemble. David Lewisi uses ordinary chairs to create the train and cells on the sparse set.

High praise must be given to director Sean Harris for undertaking this piece and giving it a fine production as well as choreographer Darlene Zoller and music director Melanie Guerin.

The show is done without an intermission and runs about two hours. Intermission would have allowed us to break the mood and escape the reality of the piece. We need to feel as trapped as the boys.

Please, go see this and bring your teenagers. The theater is doing a “talk back” after every performance with a variety of prominent guests.