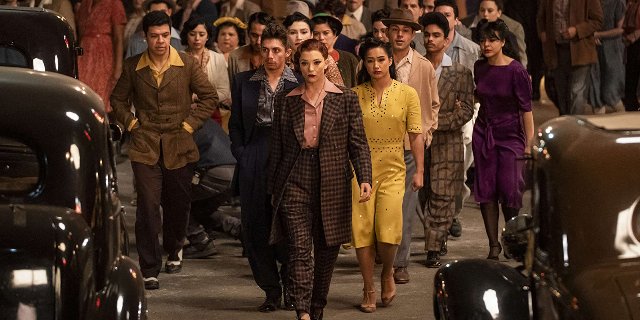 Los Angeles California today is a sprawling, iconic, American city that defies categorizing because it’s constantly reinventing itself.  It’s better known worldwide for its Hollywood film industry history and its “dream factories” that produced the stuff that those dreams were made of for over 100 years.  Hollywood movies came in the form of celluloid gift packages to dull the pain of the Great Depression with millions out of work, and soup kitchens a common sight.

Broadway may have its Great White Way, a street of four blocks or so lined with live theatre venues in the middle of New York City, but Hollywood has the magic of the camera with the intimacy of the close-up along with its freedom to roam and its ability to reach worldwide audiences and capture their minds and imaginations, if not forever, then at least, for a couple of hours.  And all for the price of about 10 cents a ticket when I was growing up. That combination proved too seductive and too profitable to pass up for the early Hollywood pioneer moguls and their studio executives back in the salad days of movies.

This newly discovered power and sophistication that was “film”, however, came with great responsibility.  Yes, we did indeed, inform, influence and promote the product without interference from the law back in the late 1920’s and early ‘30’s.  Eventually, however, movies began pushing the envelope too hard and too fast as a way to make movies more relevant as to what was taking place in society.

Being told to clean up its depictions of life, language, and sex in its movies or face government oversight – which the studios then did – until, that is, the sexual revolution of the 1960’s arrived.  Quickly, both Hollywood and world cinema producers returned to the societal mores and acceptance of the “swinging ‘60’s and beyond.  Once the 21st century arrived Hollywood producers took off their family-styled moviemaking gloves opting for the high octane action films and adult themed movies in pushing the envelope once again.  When new emerging streaming platforms via the internet, became popular the producers quickly adapted the vernacular of street language which now ends up serving as the dialogue of the characters in many films.  The 2020 worldwide pandemic of Coronavirus-19, however, changed everything connected with the entertainment industry possibly forever.

This brings us to the Showtime presentation currently being screened across the country on various streaming platforms.  “Penny Dreadful: City of Angels” is a taut, well made television series that features ten episodes, each boasting  an engaging and fascinating storyline, loaded with superb performances from a gifted cast who breathe life into a long forgotten story about LA’s race relations that’s been festering in  “LaLa land” for decades.

The tensions between LA’s Chicano community and the corrupt white power structure within the city government of 80 years ago centers around the more militant factions of young Mexican-Americans known as ‘Pachucos.   They were eager to confront the White power structures by provocation, intimidation and confrontation. Simply put, the Spanish speaking population became citizen/victims in their own city by those charged to govern and protect them.  White privilege had been effectively controlling and pressuring them by law, into ghetto-like East LA neighborhoods for years.  Corrupt and greedy politicians were ably abetted by a brutal and bigoted LA Police Department.  The elements of fear of other cultures plus the loss of power and governance by White privilege made Los Angeles of the late 1930’s a white-hot, race relations melting pot, just waiting to boil over.

“City of Angels”, the Showtime TV movie series, is a powerfully relevant TV series and a sharp reminder not only of why the painful American Civil War of 1861 was fought, only later to introduce new Jim Crow laws in the South.  These laws were the forerunners of the 2019/2020 societal movements like “Black Lives Matter”, along with changing attitudes of many Southern states when it comes to the troublesome legacy of the four-year-old Confederacy (1861 –1865) and its impact on today’s modern America after the conflict ended 155 years ago.  Time is now on the side of righting the wrongs of the past, not just for African-Americans, but for Mexican Americans, Asian-Americans, and Native-Americans as well.

“City of Angels” as a whole, is a dark, gritty, raw, fantasy-fueled TV drama series created by writer/director John Logan that is set in Los Angeles in 1938.  It’s a time fraught with racial tensions between the Mexican-American community and LA’s city government and police force.

The characters are connected via the conflict between the Mexican folklore deities of Santa Muerta (Lorenza Izzo), the caretaker of the dead and guide to the great beyond and by Magda, her malevolent provocateur sister of chaos who believes mankind is inherently evil and aims to prove her point.

Magda is sensationally portrayed by Natalie Dormer in a tour de force performance playing four different characters: Magda/ Rio/Elsa/Alex, throughout all ten episodes.  “City of Angels” is a classic good vs. evil tale told amid a passionate love story between Detective Vega (Daniel Zavatto) and Sister Molly Finnister (Kerry Bische), a host of a mega radio church in downtown Los Angeles.  Their on-screen chemistry is palpable and their in-the-moment performances are compelling and poignant.  Additionally, Ms. Bishe is an actor the camera loves. Young, beautiful and talented she delivers a series of haunting moments in all her scenes; especially those with Mr. Zavatto.

Detective Tiago Vega (Daniel Zovatto) LA’s handsome and dedicated first Mexican-American police detective and his partner veteran detective Lewis Michner (a terrific Emmy worthy performance by Nathan Lane) are tasked with a gruesome murder case, and soon become embroiled in Los Angeles’ history as well as its present local White verses Mexican-American racial tensions, plus the looming threat of WW II, including Nazi conspiracies that threaten to derail the investigation at every turn. are present. There is a lot of potent meat and potato issues on the plates of all characters to feast on, which everyone does with gusto throughout all ten episodes.

First-rate nuanced performances also come from Adriana Barraza as Maria Vega, as the widowed matriarch of the Vega family, poignantly played by Ms. Barraza (who also is a worthy candidate for an Emmy nomination), Josefina Vega, the young vulnerable daughter of Maria, is nicely played by Jessica Garza; LA City Councilman Charlton Townsend (Michael Gladis) chews up the scenery as a bullying, closeted, gay man whose ambition is to become Mayor of Los Angeles and exact revenge on all those who humiliated him in the past.

Peter Craft (Rory Kinnear) is a successful German-American pediatrician and head of the German- American Bund who is in the thrall of Elsa (Natalie Dormer), a German refugee, who woos Peter away from his wife (Piper Perabo).  And a strong performance comes from Johnathan Nieves, as the conflicted young Mateo Vega who connects himself to the “Pachuco” community as his way of rebelling against the establishment and the wishes of his mother, with both paying a high price for their decisions.

Young people are passionate and must have their say regarding the changing world in which they live.   However, their passion can get out of control at times resulting in violence, murder, and chaos for both sides. But in “City of Angels”, the beat goes on with many echoes of familiar movies and landmarks like “West Side Story”, and the unrest between the Jets and Sharks gangs that keep the NYPD busy.  LA’s famous Four Square Pentecostal mega church founded in 1927 by Sister Aimee Semple McPherson plays a major role as do other locales and events in this quasi-historical/fictional TV drama series.

As a side bar of “déjà vu” for background, New York City’s Lincoln Center Theatre and the Metropolitan Opera House complex is the result of a NYC government fiat that displaced the Puerto Rican population in that area by eminent domain.  In Los Angeles, the Mexican-American population experienced a similar fate, when the then Brooklyn Dodgers baseball team moved in 1956 to the Chavez Ravine area of LA to await the completion of their new home “Dodger Stadium”, in ‘a fait accompli’ deal by the Walter O’Malley family and the city fathers of Los Angeles.  Progress always produces winners and losers. And not all are happy with the results.

If all this convoluted byzantine-like storyline that intersects back and forth sounds more like a soap opera on steroids, it’s because it is, but with a difference.  It’s a quality production written by John Logan, and his team of writers and directors, and top-tier creative technical artists dedicated to paying attention to the smallest of details in making this slick TV series is a must see TV movie event.  With the coronavirus-19 pandemic still calling the shots and keeping people at home for the Summer, the chances of catching episodes of “Penny Dreadful: City of Angels” is very high indeed.  Make sure you see it.

Another reason for watching this $99 million dollar budgeted TV series production is that 80 percent of the performers and technical crews are of Spanish heritage. It appears that true and refreshing diversity stories have finally arrived in Southern California for people who look like themselves.  Muchas Gracias!

Having said all of the above, I am a little disappointed, however, in the wrap up finale segment which for obvious reason cannot be discussed so as not to spoil the series for those who will hopefully tune in later.  The finale episode left me with the feeling that the creators said to themselves it’s time to end the show.  More than that I cannot say except to state it’s a series that one should definitely see.  Check your local TV listings for dates, times, and channel.