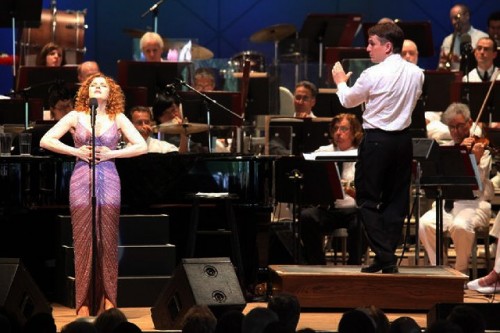 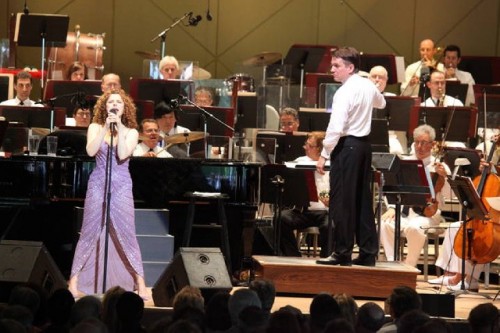 One of Lockhart’s best Pops programs.

Planning a special program for the 75th season of Tanglewood conductor Keith Lockhart came up with the theme of a tribute to the music of New Yorkers including Bernard Herman and Duke Ellington.

The Duke was born and raised in Washington, D.C. but later moved to and embraced New York.

While Tanglewood is located in Western Massachusetts many, if not a majority, of its patrons are vacationing or second home New Yorkers.

Working well in advance, as Lockhart humorously informed us, he read a front page story in the Boston Globe about the ancient rivalry between the Boston Red Sox and the New York Yankees.

As luck would have it they were going head to head for a four game series.

Depending upon which team you root for there was no joy in Mudville. The hated pin stripers (I’m a long suffering Sox fan) took three out of four. Going in to the All Star Break they have the best record in baseball and lead their division by seven games. The hapless Sox are tied for last place.

What else is new.

That said this was the most lively, kick ass, up beat, refreshing program we have ever heard from Lockhart’s Pops.

For once he shelved the usual moldy figs and served up a scorching, foot stomping, run through of the Broadway anthem “42nd Street” by Harry Warren.

Between selections Lockhart provided anecdotes and program notes. We learned that Bernard Herman was a long time collaborator with Alfred Hitchcock. There was an eventual falling out and Herman worked with other filmmakers.

When approached by Martin Scorsese to write the music for Taxi Driver initially he refused. Eventually he delivered and Lockhart conducted from the score Taxi Driver: A Night Piece for Orchestra , Prelude, Blues, Night Prowl, Bloodbathing, Finale. Herman died shortly after completing the project.

The stunningly moody and beautiful music, with a featured solo by Michael Monaghan on alto sax, vividly evoked the key sequence in the movie when Travis Bickle drives through Manhattan with a running commentary on its late night inhabitants and lurking predators.

During the Big Band era of the 1930s and 1940s (they were all but obsolete with the development of the small combos of Bop and the birth of rock in the 1950s) Duke Ellington, with his writing partner Billy Strayhorn, was the most ambitious and prolific composer of his generation.

Before the development of the LP, or long playing record, Ellington was pioneering extended compositions released on a series of 78 rpm discs. For his first Carnegie Hall concert he introduced the symphonic Black, Brown and Beige on January 23, 1943. From an early 1951 Columbia LP, Ellington Uptown he recorded the 14-minute A Tone Parallel To Harlem (The Harlem Suite). There would be a number of other extended suites including Liberian Suite, Far East Suite, Festival Junction, Such Sweet Thunder, Drum is a Woman, and arrangements after Tchaikovsky.

As a lifelong appreciator of the genius of Ellington it was such a treat to experience a full symphonic arrangement of the seminal A Tone Parallel To Harlem. It is a work I know only from recordings as it was not often performed during the many years that I heard the band on numerous occasions and settings from night clubs, to concert halls, and festivals.

This performance again reminded me of Lockhart’s unique feeling for jazz. A couple of years ago at Tanglewood he led the Pops in a tribute to Bennie Goodman and his signature piece that originally featured the drummer Gene Krupa, from the Carnegie Hall 1938 concert, his arrangement of Sing Sing Sing.

Yesterday, Lockhart and the superb pops players brought out all of the rich nuances of Ellington’s pioneering arrangements. The music never has sounded better. It was especially fascinating to hear the gifted BSO players channeling those Ellington all stars from the alto of Johnny Hodges, to baritone of Harry Carney, and the trumpets of Ray Nance and Cat Anderson.

This past season I was fortunate to see her in a revival of Stephen Songheim’s Follies. She is know particularly for Sondheim. She offered two from Follies “In Buddy’s Eyes” and “Losing My Mind” as well as selections from  Sweeny Todd  "Johanna" and  “No One Is Alone” from Into the Woods.

Her two selections from the Rodgers and Hammerstein classic South Pacific were surprising. Both songs were composed for male voices. The first was a rousing, comedic choral piece “There Ain’t Nothing Like a Dame.” Of course with all of its sexy slurs it was rather odd to hear it sung by, well, a dame.

Speaking of LPs the original cast recording of South Pacific starring Mary Martin and Ezio Pinza was the first of its genre. During the summer of 1949 I wore out the grooves and for years could crank out a decent parody of Pinza’s heavily accented, charming “Some Enchanted Evening.”

There is always that element of risk taking when performing someone else’s standards.

Peters did just that is a sexy, adventurous, outrageous version of Peggy Lee’s finger snapping, pithy, clipped “Fever.” While she had the look and all the right moves, including lying down invitingly on the piano, she wasn’t up to Lee’s scorching, divaesque delivery.

It’s problematic when Peters, who remains youthful and almost perpetually adolescent, pushes herself across the line into  adult/ sexy. She looked sensational in a slinky sequined dress with lots of bare shoulder and a slit up the front. But as she herself quipped it was more like playing dress up. Especially when combined with that mess of Shirley Temple curled red hair.

For me, rightly or wrongly, Bernadette will always be sweet sixteen.

As always, with a full kit of Broadway moves, really working the stage, and even venturing out into the audience.

She closed with her own composition “Kramer’s Song” written for a children’s album and CD Broadway Barks a benefit for animal shelters.

Hands down this was one of the best ever Pops programs.