Olympia Dukakis in The Tempest at S&Co 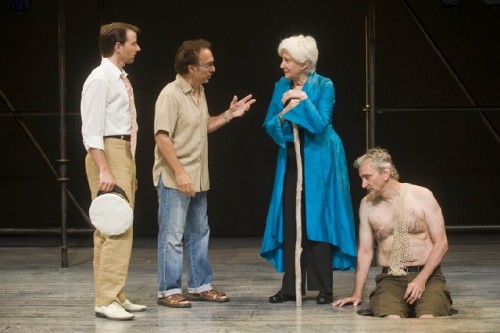 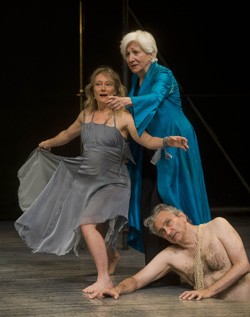 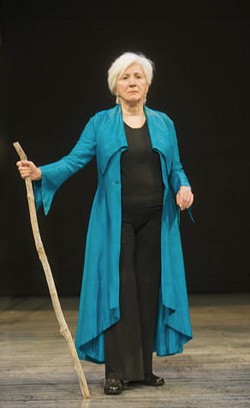 Dukakis will raise a theatrical storm in The Tempest.

“O wonder! How many goodly creatures are there here!
How beauteous mankind is! O brave new world that has such people in’t” The Tempest V.i

(Lenox, MA)—The magic of Shakespeare’s The Tempest lands at Shakespeare & Company’s Tina Packer Playhouse later this month, with a unique, beautiful, and re-imagined production. Artistic Director Tony Simotes is pleased to present this profound romance for the first time on the Company’s main stage in almost a decade. Simotes and Academy Award-winning actress Olympia Dukakis team up for this fresh and provocative take, which aligns the magic of the island with the often tumultuous relationships between families—with a twist—Ms. Dukakis plays the banished Duke as a woman, Prospera.

Considered by many scholars to be William Shakespeare’s farewell to the stage, The Tempest is a profound reflection on the power of forgiveness. Steeped in theatrical allusions and rich language, it was the last play penned alone by Shakespeare, and the most popular of his late romances. Filled with moving, funny and enchanting moments, the underpinnings of the fantastical world, much like our own, are filled with mystery, darkness, and the unknown.

Tickets are $15-$95, and S&Co. offers a wide range of discount options, including discounts for groups, students, senior citizens, military, teachers and our very popular 40% Berkshire Resident Discount. To view a complete schedule, receive a brochure, or inquire about discounts, please call the Box Office at (413) 637-3353 or visit www.Shakespeare.org. For customized group visits—which may include artist talkbacks, tours, and catered events—contact the Group Sales office at (413) 637-1199, ext. 132. The Tina Packer Playhouse is air-conditioned, hearing aid assisted and wheelchair accessible.

“In a way, directing Olympia is a culmination of my life’s journey,” says Simotes, “She taught me at New York University, as well as founding S&Co. members Dennis Krausnick, Kevin Coleman, and Rocco Sisto, and she has been a critical part of our lives ever since. Olympia’s magnetism heightens our work as directors and actors; her influence in the rehearsal room makes every actor’s work richer and deeper. She taught us to go deep inside ourselves as artists—to find that unique creative spark that we all carry.”

Simotes sets Shakespeare's magical tale on a Mediterranean island in the 1940's. His vision is brought to life by a talented ensemble of designers, including music by longtime Company composer and musician Scott Killian. Period costumes are designed by Deborah Brothers, and a unique and flexible set has been conceived by Sandra Goldmark. Simotes also delights audiences with singing, dancing and live music, which he's sprinkled throughout the play.

Prospera, the exiled Duke of Milan and a powerful magician, has been stranded on an island for twelve years when she learns her brother, who was responsible for her exile, is at sea. In a moment of vengeance, Prospera creates a tempest of epic proportions, washing ashore not only the Duke’s brother but unwittingly the remedy that heals all wounds.

“I am delighted to be a part of Shakespeare & Company’s 35th Anniversary Season,” says Academy Award-winning actress Olympia Dukakis.  “Working with Tony on The Tempest is something I’ve wanted to do for the past couple of years. I am thrilled to finally get it off the ground and see where it lands. I’ve known Tony, Dennis Krausnick, Kevin Coleman, and Tina Packer for over three decades—from our times at NYU where Dennis, Tony, and Kevin were my students, during their incredible work creating Shakespeare & Company, to their continued commitment to that work, the craft of storytelling, and speaking the truth. The quality of the productions reflects the very core of their aesthetics—which is steeped in passion, curiosity, irreverence, and even rebellious work at times—but it’s always joyful. I am also looking forward to working with other great talents including Rocco Sisto, also a former student of mine, my brother Apollo, and all the other wonderful and talented Shakespeare & Company actors. Tony is all about creating extraordinary experiences, whether on stage as an actor or as a director. That will never change, and it my pleasure to work with him this season, not only as an artist, but also as a dear friend. Shakespeare & Company is a place to come and celebrate all that is good in our world—and to be inspired to change what isn’t. To ‘hold, as t’were, a mirror up to nature’.”

Many longtime Company members will reprise roles that they’ve played at Shakespeare & Company in the past, including Kristin Wold as Ariel and three-time OBIE-Award winning actor Rocco Sisto as Caliban. The talented ensemble also includes Apollo Dukakis as Gonzalo, James Read as Antonio, and Company favorites Timothy Douglas as Trinculo, Jonathan Epstein as Stephano, Merritt Janson as Miranda, David Joseph as Sebastian, and Ryan Winkles as Ferdinand.

“Olympia has an unmatched ability to turn 17th Century verse on its head and makes its relevance vividly apparent,” says Simotes, “Beyond her obvious talent; she’s a fearless artist that brings so much to a production. It is her fearlessness and inherent desire to dig beyond the obvious that we are taking a very different turn with this production. With all of these elements aligned, I can’t wait to see what happens when we get into the rehearsal room, and to share that experience with you all.”