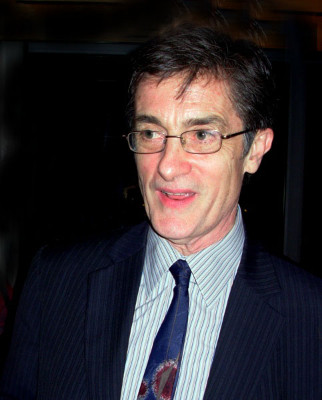 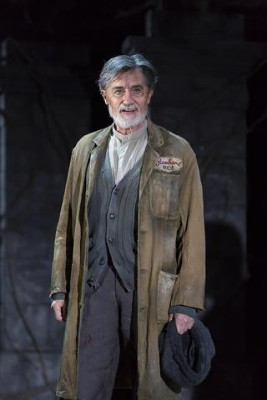 Rees in his final role in The Visit a WTF production which is now on Broadway. Photo courtesy of WTF.

A familiar presence in the Berkshires, Roger Rees, who enjoyed a long association with the Williamstown Theatre Festival has died at 71. He had a medical procedure in May which caused him to drop out of the Broadway, Tony nominated musical The Visit.

His tenure as artistic director of Williamstown Theatre Festival from 2004 to 2007 ended when his contract was not renewed. It was known that he had differences with the board as was related to me at the time by a female member.

The program initiated by Rees evoked mixed responses from audiences. In general it was viewed as part of a period of long and gradual decline for the festival.

In addition to planning the season Rees also directed and performed including a black box work in the non equity acting program. There was no denying his commitment and energy.

While at times difficult and complex to deal with, particularly for the board and media, a former publicist who worked for him told me that he was adored by those who dealt with him on WTF productions.

When the late Nicholas Martin took over, with significant budget cutbacks, he had a mandate to get WTF back on track. Like Rees he served for three years including two of them dealing with the results of a stroke.

With WTF again on secure footing there was further solidification with producer Jenny Gersten at the helm. Rees and Martin directed during the WTF season and then went on to other work for the remainder of the year. Gersten worked year round for WTF. She left at the end of a three year contract but programmed a fourth season while the board sought new direction. This is the first season for Mandy Greenfield, who, like Gersten is a full time producer and artistic director.

Under Martin and Gersten WTF again fed shows to New York both on and off Broadway.

Last summer Rees returned to Williamstown as Anton in the John Kander and Fred Ebb musical The Visit. It had the bad luck of opening in Chicago during 9/11. With restricted air travel few if any Broadway professionals saw their last work.

Originally cast for Angela Lansbury after Ebb died in 2004 it was restaged with Chita Rivera for Washington's Signature Theatre in 2008. An attempt to bring it to New York’s Public Theatre fell through when investors withdrew.

For its WTF production last summer the book was revised by Terrence McNally. Director John Doyle deleted extraneous characters and cut the dark musical to one 95 minute act.

The show which continues to run is a vehicle for Rivera who was Tony nominated as a lead actress in a musical. While few were impressed by his singing Rees was given mostly positive reviews primarily for considerable dramatic skills.

While Rees portrayed characters over multiple seasons of Cheers, West Wing and appeared in some movies he is primarily remembered for success in theatre.

He joined the Royal Shakespeare Company in 1967, performing in The Comedy of Errors, Three Sisters, The Merchant of Venice, Othello, Twelfth Night and Cymbeline. With Tom Stoppard he appeared in The Real Thing and Hapgood. His breakout lead role was The Life and Adventures of Nicholas Nickleby which transferred from London to Broadway in 1981. It was a two part, eight and a half hour production for which Rees won a Tony.

He was Tony-nominated for The Red Shoes and won an Obie Award in Jon Robin Baitz’s The End of the Day. Rees and his husband Rick Elice collaborated on Peter and the Starcatcher, based on the novel by Dave Barry and Ridley Pearson. Co-directed by Rees and Alex Timbers, the show earned several Tony nominations, including for Rees and Timbers.

Other significant Broadway roles included replacing Nathan Lane in The Addams Family and a revival of The Winslow Boy.

In a long and successful career Rees was always in demand and on top of his game.