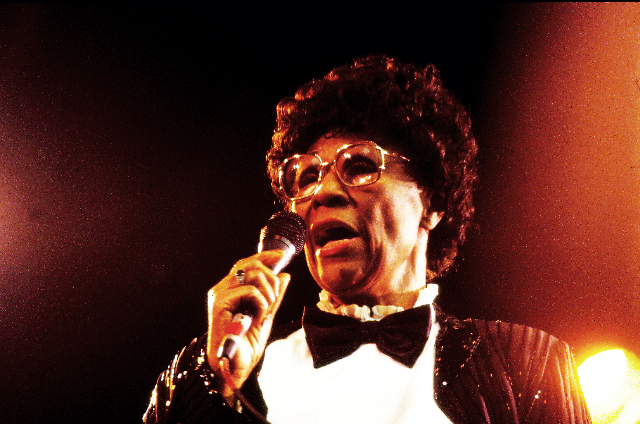 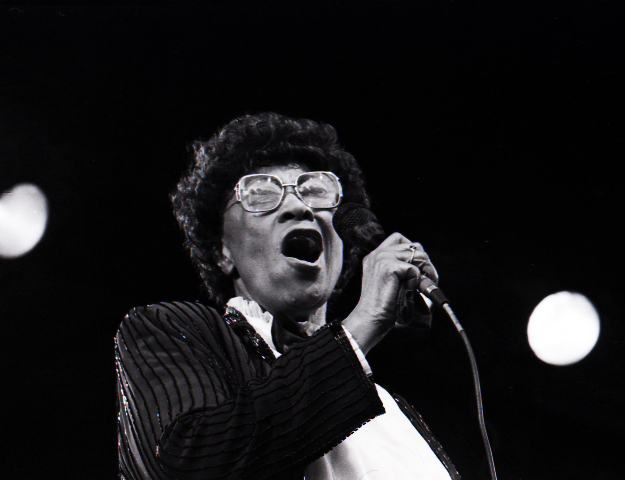 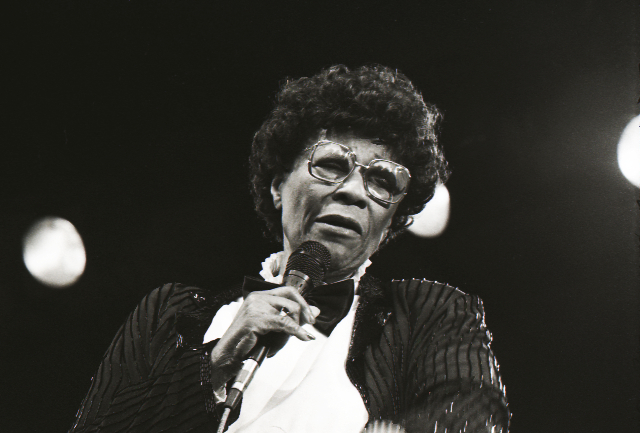 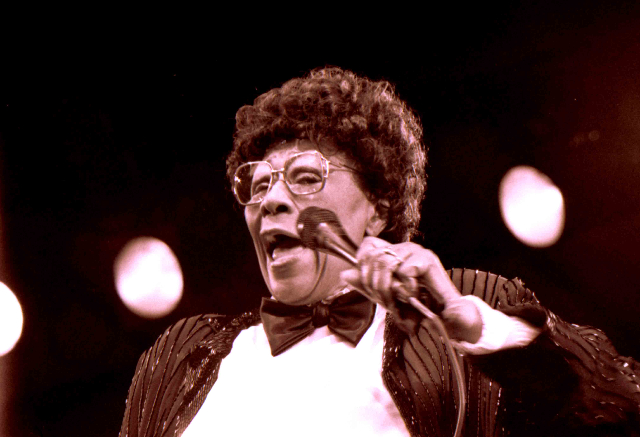 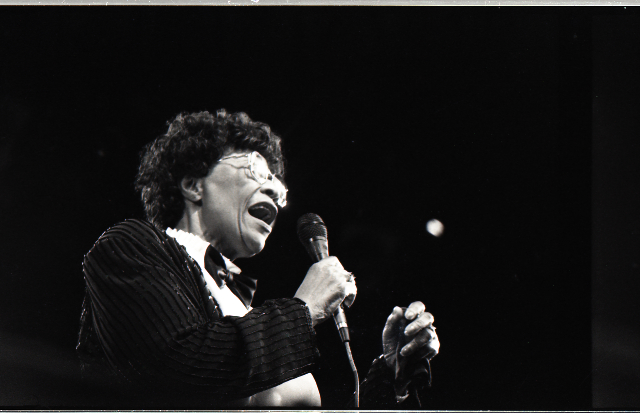 With incredible pipes, unmatched chops, free form inventive vocalese (scat) Ella Fitzgerald  (April 25, 1917 – June 15, 1996) was among the handful of elite jazz singers of her generation. Comprising the big three the other two were Billie Holiday and Sarah Vaughan.

In the jazz world there was a peerage of the greatest artists; Duke Ellington, Count Basie, Lady Day, King Pleasure among others. The sobriquet for Ella was The First Lady of Song.

Unlike the heart wrenching hard life expressed by Holiday, or the soulfulness of Vaughan, the singing of Fitzgerald was notable for its purity, perfection, sweetness and invention.

She could take mundane material from a Broadway show tune to Tin Pan Alley, break it down, tear it apart, reinvent it and make it her own. Late in her career she had a huge hit with "Mack the Knife" from the Brecht/ Weill Three Penny Opera.

Preserved in recordings like Ella and Duke at the Cote D'Azur, 1967,  it was astonishing when she forgot the lyrics. With the impish fun that charmed and endeared audiences she would go off script and just make it up with combinations of ad lib and scat.

Scat started in 1926 when her great friend Louis Armstrong, while  recording a tune "Heebie Jeebies," lost his place with the sheet music and just cut loose.

The Creole hipster/ prankster, braggadocio, Ferdinand Jelly Roll Morton, in his Library of Congress interviews/ performances with Allen Lomax offered another answer when the musicologist asked "What does scat mean?"

With aplomb Jelly Roll replied "Why scat is something I invented down in New Orleans what gives a song a flavor." Which he then marvelously demonstrated.

On stage at Ozawa hall during the celebration the classical singer, Stephanie Blythe, offered her own take on Ella.

With some 18 singers and musicians on stage we only got a taste of Blythe. The audience erupted, however, when she ripped into " Blue Skies" by Irving Berlin. In the only instance where the musicians really got into a swing Blythe evoked the heart and soul of Fitzgerald including a perfect evocation of her free form, improvised scat singing.

During later remarks we learned that she had sung it note for note in music transcribed from a recording. That was consistent with the entire program which was arranged by Lee Musiker.

Born to unmarried parents who parted when she was not yet three the early years, which she never discussed, were tough particularly after her mother died in a car accident.

The breakthrough occurred when 17 on November 21, 1934. That night she won a talent contest at the Apollo Theatre in Harlem. She joined the big band of drummer Chick Webb which she briefly fronted when he died. In 1942 she launched a career as a solo artist. With Webb she had her first hit taking apart a novelty nursery song "A Tisket a Tasket a Green and Yellow Basket."

After the war the big bands died and the music shifted to combos and bop. She enjoyed success in that genre.

Evolving into a scat/ bop singer she recorded hits with Decca Records. She began to tour with entrepreneur Norman Granz as a part of his Jazz at the Philharmonic series of concerts and later recordings. These were jam sessions featuring an eclectic mix of players.

On the road she encountered racism. including missing a gig in Australia when she and Granz, for no reason, were taken off a Pan Am flight. They sued and won a settlement.

Granz became her manager and pitched a recording of the music of Cole Porter to Decca. They were not interested and Granz was provoked into founding his own labels Verve, Norgran,  Cleff and Down Home. A decade after he sold his labels to MGM, in 1973, he founded Pablo Records with memorable all star sessions.

Much of the Verve material, including all of the Ella series of double lp's (up to 38 songs each) have been reissued on vinyl as well as cd's.

It was not the first attempt to merge a jazz/blues artist with popular material. Earlier Bessie Smith recorded "Alexander's Ragtime Band" and other Tin Pan Alley tunes.

By the mid 1950s, when Ella was recording what evolved as The American Songbook, the emergence of rock and roll was pushing jazz aside. The response was to make artists like Fitzgerald more accessible. Granz recorded Charlie Parker and Dizzy Gillespie with strings. As did Columbia with Billie Holiday. Mercury  morphed Vaughan into an R&B artist with mostly over produced albums.

In 1954 Louis and Elaine Lorillard backed the first Newport Jazz Festival hiring Boston's George Wein to organize the event. The backers dropped out several years later but Wein continued and launched the era of jazz festivals.

A primary shift was back to presenting jazz artists for who and what they are. It was in this context that I saw Ella a number of times late in her career. The voice was as magnificent as ever but she was in declining health. There were eye operation resulting in thick glasses. So there was a poignancy although she continued to perform with upbeat wit, and indelible, humanistic optimism.

To celebrate her contributions to the American Songbook on the occasion of her centenary was apt. On many levels, as a jazz fan and critic, it proved to be disappointing and problematic.

There has been a steady and consistent decline of jazz programming at Tanglewood. For a time there was the Labor Day weekend Tanglewood Jazz  Festival. From the view of a purist those were magnificent events particularly when curated by the renowned Boston entrepreneur Freddy Taylor. After his departure there was an increased effort to conflate jazz and classical music. Representative of this were booking of Donal Fox among others.

When the jazz festival was suspended there were seemingly annual bookings of major artists- Herbie Hancock, Chic Corea, Audra McDonald and Wynton Marsalis- in Ozawa Hall. Tony Bennett was featured in The Shed including a gig with Lady Gaga.

Other than an evening of Ella, as interpreted by primarily Tanglewood Fellows, there is no significant jazz programming this season.

For this momentous  occasion one would expect that renowned jazz artists would be honored to perform in her memory. The event proved to be a sell out with a large turnout on the lawn.

With some major players it may well have been expanded to the Shed and would be a natural for PBS.

Instead Tanglewood opted to organize it in house with Pops musicians and a number of fellows. Blythe is in residence working with fellows and Dawn Upshaw, who directs the program, co hosted with Blythe.

The fellows made a game effort and some of them proved to have remarkable voices. But it was readily evident that there was little depth in jazz singing. It is a matter of emphasis and timing. The approach of breaking down, stretching out and riffing on lyrics is very different from a straight take on a show tune.

Even late in their careers Frank Sinatra and Tony Bennett masked the decline of their rusty pipes with  unique and magnificent jazz phrasing. It's called swing and as Duke noted, without which, it don't mean a thing.

There were promising moments. Baritone Ryne Cherry was deeply moving with a nice rendering of the melancholy ballad "Skylark" by Hoagy Carmichael. He was well paired with soprano Paulina Swierczek on the Gershwins' "Let's Call the While Thing Off."

In another Gershwin standard "Oh Lady Be Good" Blythe and Upshaw traded riffs including some scat. That blended into a rousing finale with all the fellows joining in with their versions of scat. It was great fun.