Vignettes on Love by David Steele in Frisco

Produced by PlayGround at Potrero Stage 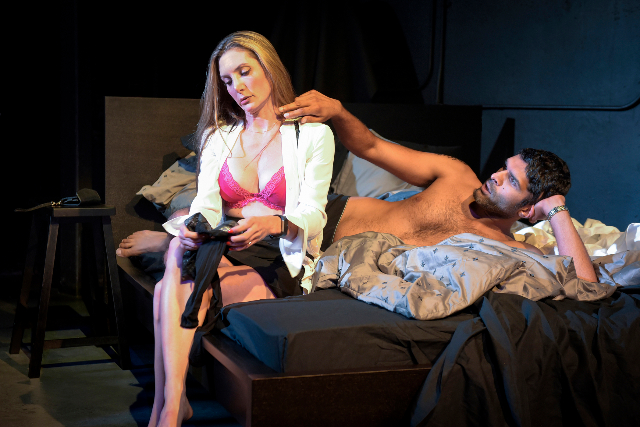 Heather Gordon as Tess, Kunal Prasad as Jason. All photos by mellophoto.com 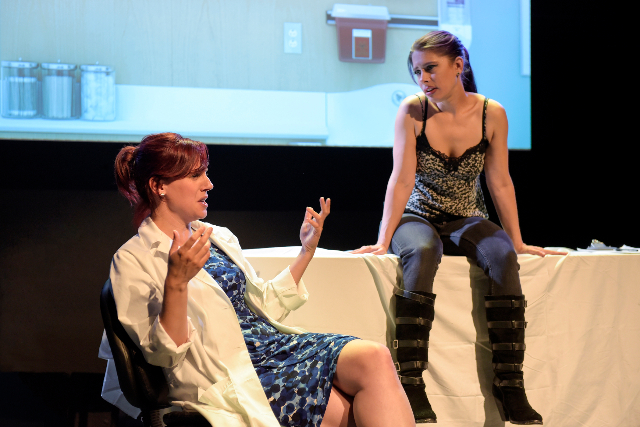 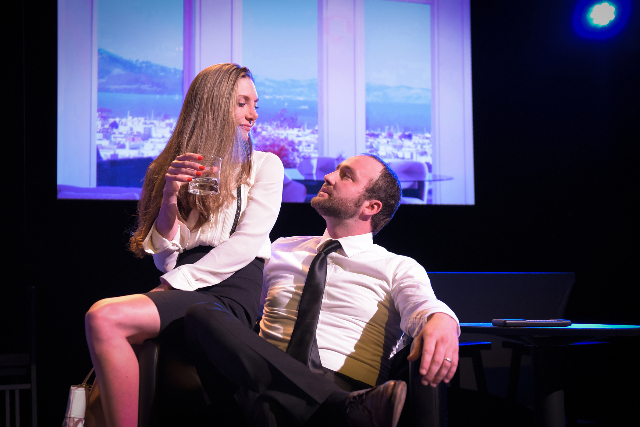 "What is love?  Five feet of heaven with a ponytail."  -  from the song "What is Love?" by The Playmates.

When Jonas is asked why he loves Tess, he admirably cites several, albeit trite and superficial reasons - from the way she looks to their liking the same television programs.  And so it is with a most common and cherished emotion.  We seek it.  We sense it.  Yet fully understanding it, and sometimes, fully appreciating it, is elusive.  The world premiere of the dark dramedy "Vignettes on Love" provides enjoyable entertainment as it explores the dynamics of love from giddiness to its hurt.

The vignettes are interconnected scenes about several young professional San Franciscans looking for love, or perhaps just following their hormones, in all the wrong places.  The action occurs in a 24 hour period with more beddings than in a Nevada cathouse and more betrayals than in a den of grifters.

As the plot commences, Jason has received a great job offer, but it's in New York.  He doesn't want to accept it unless Tess will leave Jonas and join him.  Problem is, Tess is married to Jonas.  And while she has issues with Jonas, she will soon learn that Jason _____ and that Jason _____ .

Romantic love and its attendant sex comes in many flavors, and "Vignettes" reveals a number of them, from lesbian to friends with benefits.  But love extends beyond the passion and the mysterious attraction that people have with one another.  Life interferes and becomes part of the equation.  Do different attitudes toward having children and parenting responsibilities affect the love in a relationship?  Can career aspirations rupture the love connection.  What about marriage itself?

Most societies, no matter how different in other respects, have converged upon the long term monogamous, heterosexual relationship as its bulwark.  That said, there are also those who support the rule but break it.  The characters in "Vignettes" typically seek the comfort of continuing relationships with the exception of Kat, the fulcrum of the action.

Kat tends bar, and bartenders are often cast as good listeners and armchair psychiatrists and philosophers.  She is that and more.  She keenly observes and asks the right questions about people's expectations of love.  Kat is the realist who challenges the need for lengthy relationships and instead lives for the present.  Not only does she engage with customers' emotional needs, but she can become physically involved as well.  Through the amorous interactions of the various  characters, "Vignettes"  begs the question - is there a right way in love relationships?

The actors give fine performances.  Particularly effective are the women in the two contrasting central roles, trixxie carr [sic] as free spirited Kat and Heather Gordon as conflicted Tess.  Director Jim Kleinmann's staging works well for the intimacy of the topic.

Theater continues to adopt technological innovation, and this play is billed as multi-media, which suggests electronic sources integrated with live action to drive the plot line.  That is not exactly the case.  Instead, pop-music-accompanied videos  contextualize the narrative as nine short clips punctuate the scenes.  Most are interesting monochromatic abstractions that dissolve to yield some orientation to San Francisco.  Although compelling in their own right, they would perhaps be more effective if their exposure continued through the scenes.

As an overarching theme, the play fixes on the scorpion.  And which character(s) might that be?  A scorpion graphic represents the logo of the play and appears on the stage screen from time to time.  The fable of the scorpion and the frog, in which the scorpion asks the frog for a lift across a river is told - not all at once, but in a hanging episode format.  While the moral of the story is that animals act in accordance with their nature, there other ways to express that without borrowing a fable.

In all, "Vignettes" covers many common situations, but it does so in a provocative and interesting way that produces a worthy piece of work.  Note: this play is for mature audiences only.  It contains nudity and sexual content.

"Vignettes on Love" by David Steele and co-written by Victoria Chong Der is produced by PlayGround and runs at Potrero Stage, 1695 18th Street, San Francisco, through July 30.

Reposted courtesy of  For All Events.