Time Flies and Other Comedies by David Ives 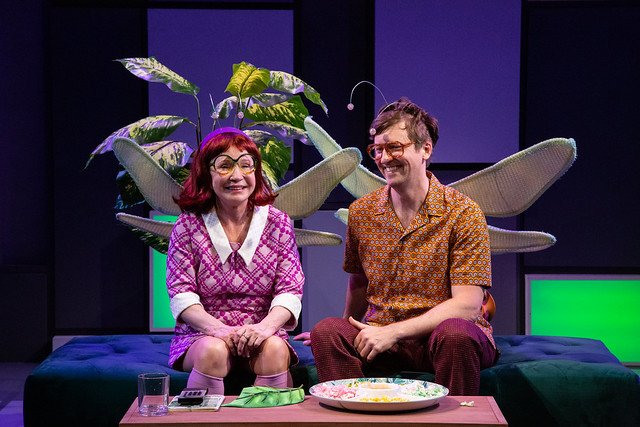 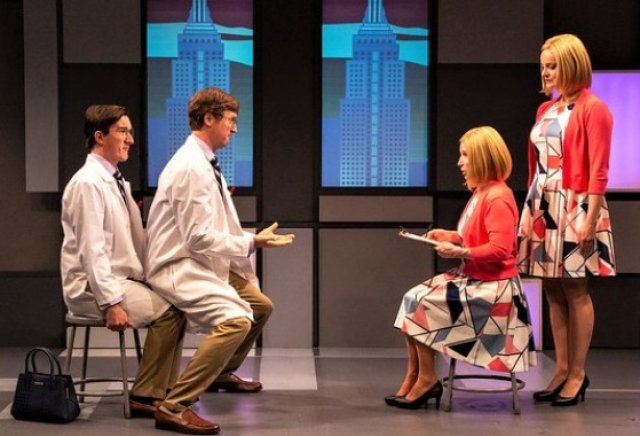 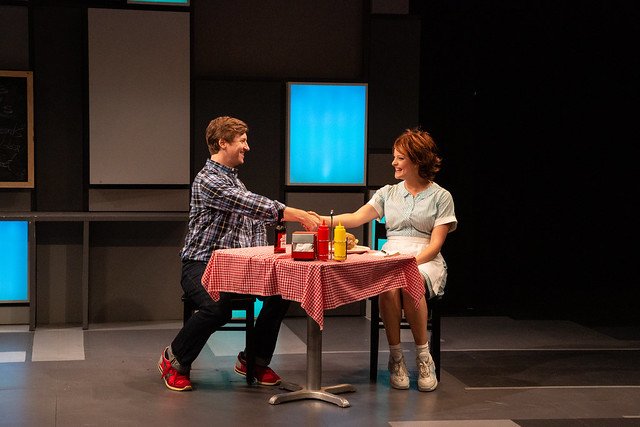 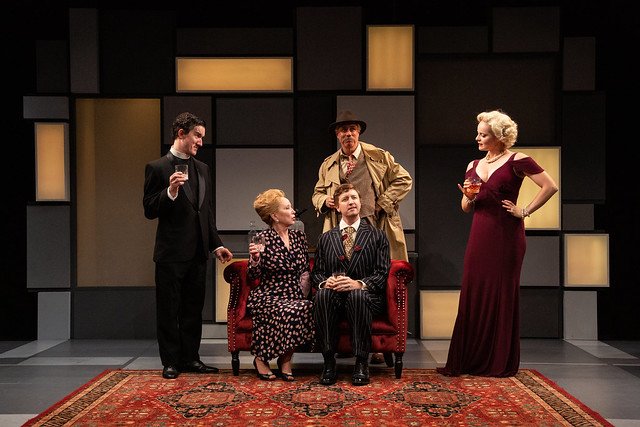 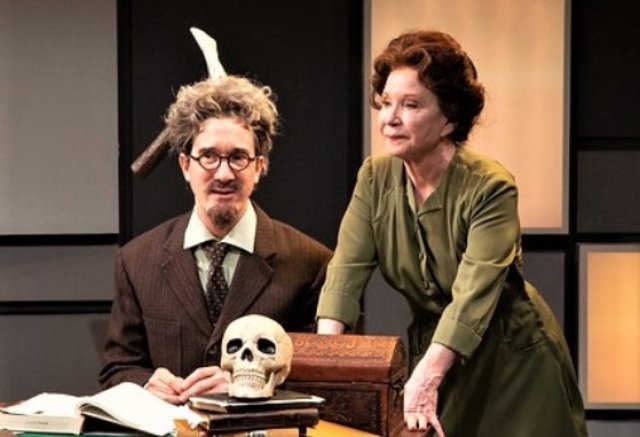 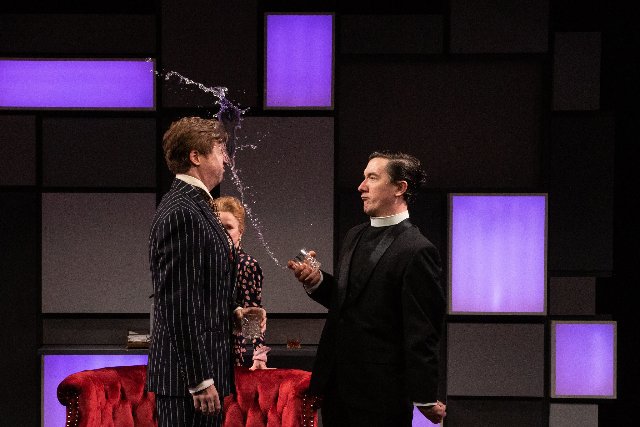 The buzz out of Barrington Stage Company, good grief, is that David Ives' Time Flies and Other Comedies, is bugged. Literally.

If you agree that it is better to laugh than cry then get to St. Germain Stage. You are in for a rare and hilarious, blissful evening of gonzo humor. Over-the -top does not begin to describe the vignettes, three each, in two acts.

Running at two hours and an intermission we are treated to the greatest cast- Cary Donaldson, Carson Elrod, Jeff McCarthy, Ruth Pferdehirt, Debra Jo Rupp- this side of heaven. Or at least here in the bucolic paradise of a summer in the Berkshires.

It is always a treat to see the diminutive Debra Jo Rupp a veritable genius of comedy. There is a lightness of touch that is a wonder to behold. Just watching her skip and trip across the stage in mincing steps always has me in stitches. Her range of facial expressions can be as deadpan as Buster Keaton. Add to that a vast vocabulary of hilarious body movements and gestures.

In this production the director Tracy Brigden saved the best for first. We dropped dead, rolled in the aisles to see the petite, winged Rupp as a Mayfly. She will be born, mate, and die all in one day. That feeds into a ton of gags, jokes and shtick.  You will guffaw till you drop. Meeting the wonderful Cary Donaldson he “flies her home.” There she offers him snacks, an apetizing platter of larvae, smooching and a shag. Just one it seems. She quips that there is no prospect of multiple orgasms. So goes the death of a virgin in the dating rituals of a Mayfly.

Their world is a pond.  As they watch  Planet Earth on TV, actually, more like a mucky, slimy, polluted puddle. Is a safari outfit (wonderful costumes by Elivia Bovenzi) Jeff McCarthy glides in as an ersatz Sir David Attenborough. For the delighted audience the interlude ends all too soon.

With a bit of stage dressing, however, there will be another and yet another sequence. That’s a challenge for the actors as well as the audience. There is adjustment to a complete swing of mood and ambiance. The brilliant writing of Ives displays an ability to succinctly explore a range of theatrical genres. Each of the six segments stands entirely alone. Adroitly, he crafted six mini plays into a single experience.

All involved in this superb Barrington production have contributed to a seamless and seemingly effortless series of transitions. Much credit goes to the minimalist, modular, functional design of Brian Prather. The backdrop is a simulation of a Mondrian painting. The rectangular panels are lit in variations and open or close with graphic accents. The lighting of Matthew Richards, and Sound of Eric Shimelonis, are effective in creating six distinct experiences.

Wigs by Mary Schilling-Martin and costumes by Bovenzi were essential to establishing the transition to Enigma Variations. With the theme of doppelgangers there is the precise pairing of Rupp and Ruth Pferdehirt squared off with twinned therapists in identical lab coats, Donaldson and Carson Elrod. There is convoluted word play with text doubled and looped as we careen round and round. There is intermittent intervention, including a referee’s whistle, by the nurse, McCarthy.

The final segment of the first act Variations on the Death of Trotsky hinges on riffs of a sight gag. The Russian revolutionary, on the lam in Mexico, was assassinated while a guest of the Marxist artists Diego Rivera and Frida Kahlo. From behind an ice pick or ax was smashed into his head. Here we see Leon with a mountain climber’s pick embedded in his scull. These final moments are shared with Mrs. Trotsky (Rupp). We meet the Spanish gardener who did the nasty deed. The head prop is milked for maximum impact.

The assasination occured on August 22, 1940. The gag of this skit is that the wall calendar states August 21. He also survived for a day. So the joke explores is this before or after he gets an ax in the head? Trotsky hovers back and forth debating the decisive moment. How outrageous for Ives to play it as a joke. Seemingly, getting axed upside the head isn't funny. Or shouldn't be. Yet it is. And how.

After intermission we couldn’t wait for more. Life Signs did not disappoint. Here Rupp is quite deceased or so it would seem. In a rather cavalier manner she if pronounced dead by the doctor (McCarthy). It is implied that he “knew” her more than just professionally. She had an estranged relationship with her son (Carson Elrod) who mourns nevertheless. He is comforted by his wife (Pferdehirt).

Then, good grief, she speaks. The doctor is called back. In a rather Monty Python manner he crassly confirms that she’s as dead as a doornail. He lifts a limp arm which just plops down. He asks for a martini but as there is no gin, but brandy, he departs. The brandy becomes a plot point. It seems that good old dead mom used to splash it between her thighs. For what happened next use your imagination.

From the occasional word she escalates into raucous, shocking and raunchy reflections from the other side. Given Rupp’s sweet, pixie like persona it’s always a surprise and shock when she talks dirty. Which makes it all the more outrageously funny. There is a sexual litany from diddling a childhood girlfriend, for a dozen years it seems, to humping the doctor and a slew of others. Her husband was a nice man but on the small side. Particularly when compared to the doctor and other lovers who were huge.

It gets to the point where it would just be better if potty mouthed mom just shuts up and croaks. That finally happens with more relief than grief.

The premise of Philadelphia was a bit too conceptual for easy laughs. Set in a New York deli McCarthy explains to Donaldson what it means to have A Philadelphia. It’s a circumstance where the opposite is true. To order a burger ask for pastrami. If you want a beer ask for coffee. The waitress will answer that “we don’t have or we’re out of…” Through complex logistics you get your beer and burger. Explaining the concept of A Philadelphia to the waitress she responds, “I know what you mean. All week I’ve been having a Cleveland.”

With effective wig and costume changes the entire cast assembled for the anchor leg with The Mystery of Twicknam Vicarage. In a send up of a stiff-upper-lip British who-done -it there’s somebody very dead staining the rug. Or is he? Yikes, gosh, kaboom the mustached, trench coated detective (McCarthy) proclaims “It’s murder and someone in this room did it.” No, it wasn’t the butler. Good grief there wasn’t even a butler?

The only disappointment of this evening of theatre was that it ended. It was such a treat to see Barrington regulars having a ball running riffs. It was terrific to see McCarthy in other than a romantic leading man role. He has a true gift for the lighter touch of comedy. There are just not enough superlatives for a superb cast. As an ensemble they knocked it out of the park. We laughed all the way home.