Bells Are Ringing at the Colonial

Reviving a 1950s Hit Broadway Musical in the Berkshires 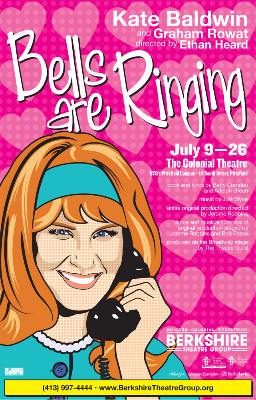 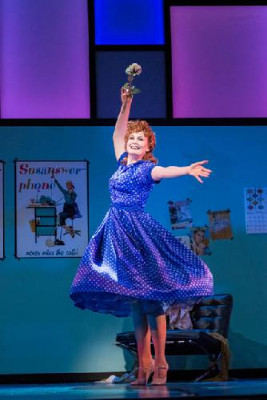 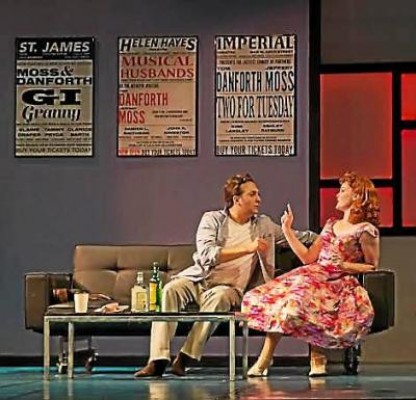 Ella tries to talk Jeffrey (Graham Rowat) into giving up booze and return to writing. 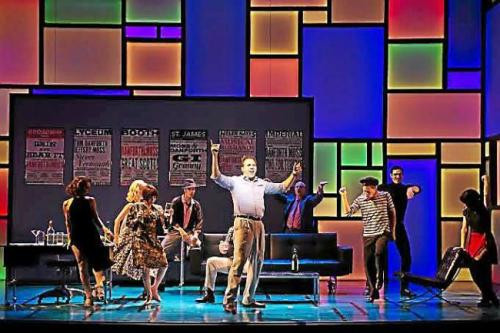 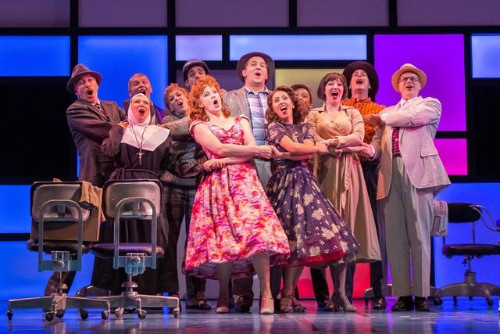 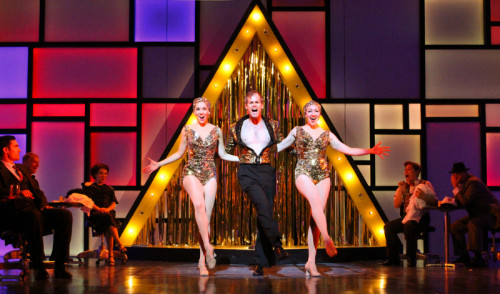 Starting with the inspired husband and wife casting of Kate Baldwin and Graham Rowat, there is a lot to like about the revival of a 1950s hit musical Bells are Ringing.

It may be the best musical staged in the past few years at  the Colonial Theatre in Pittsfield the flagship of Berkshire Theatre Group.

While scaled back, with the cast performing multiple roles, and trimmed to accommodate the budget of regional theatre, this production appears to be larger and more elaborate that it actually is.

In addition to superb singing and dramatic flourishes of the actors the real star of this production is a terrific set by Reid Thompson with knockout lighting by Oliver Wason.

Too often big shows with small budgets end up with “use your imagination” bare pipes sets. This summer another company has taken it to the limit with a no set version of a set.

Waiting for the show to start we contemplate an ersatz grid with thick black lines evoking a painting by Mondrian. The colors, however, are all wrong. The artist never used purple or green.

The raised curtain revealed a cube with a variation of his grid patterns. In some ways it reminded me of the London set for The Curious Incident of the Dog in the Nighttime. Here the multiple rectangles became silhouetted windows for the multiple clients and characters encountered by telephone operator Ella Paterson (Kate Baldwin) speaking to the clients of an answering service.

For the opening of the second act Wason has choreographed a kaleidoscope of brilliant colors creating a pre-psychedelic light show.

In many ways the 1950s, as exemplified by this musical, was an age of innocence in the post war era of Eisenhower, prosperity, traditional family values, and McCarthyism. For all of those reasons the work of Betty Comden and Adolph Green, with music of Jule Styne, original direction of Jerome Robbins and choreography of Bob Fosse, is a mostly dated and at times too obvious period piece.

Flouncing around with full skirts and crinolines designed by David Murin and big hair by Dave Bova the telephone operator Ella with an active fantasy life is ultra compelling, as played with gusto by Badwin, but impossibly naïve.

It is only her wonderfully full throttle, bravura performance that makes us barely notice that she is pulling the career of her washed up, alcoholic, playwright love interest, Jeffrey Moss (Graham Rowat) out of the gutter. Only in the 1950s were we asked to look the other way as the heroine, so pure, idealist, romantic and innocent is hooking up with a handsome, down on his luck drunk. Yet again we are asked to believe that love conquers all.

When not answering the phone it appears that Ella focuses on polishing her nails, fixing major hair or reading movie and romance magazines.

In a parallel story Sue (Cheryl Stern) who runs the answering service is seduced and charmed by Sandor Prantz (Joseph Dellger) to provide space in her office to function as a bookie. He has an elaborate scheme with a phony record company to take orders for classical albums that are actual codes for betting on ponies. Sue is willing to fork over her nest eggs to this con artist.

One wondered how that sat with the young women who were well represented by the opening night audience. In an age of cell phone and social media, hooking up rather than romance, just what did they think of this age of landlines, dial phones and answering services? It is likely that more than a few of them were texting during the show.

Not enough may be said of the performance of Balwdin. She brings real star power to the Berkshires. Just to make the point of incredible pipes she held a note for an impossibly long time milking it for the benefit of the wildly appreciative audience. In addition to magnificent vocal chops she also has great comic timing and nice moves in the dance sequences.

At an hour and a half the first act often was long and sluggish. By current standards the first act is about the length of most shows. Currently on Broadway, for example, the revival of The Visit clocks in at 97 minutes. So this was a lot of exposition. Having established the plot points, however, the second act was more enjoyable and seemed to fly by in a blur.

There were fun songs and dance numbers. The subway meet and greet "Hello, Hello There" is wonderfully inventive. Sandor selling his betting scheme “It’s a Simple Little System” is hilarious. The Cha Cha dance sequence with “Mu-cha-cha” was fun but, OMG, Cha Cha! How ‘50s. For cripes sake at least make it a Mambo.

We were floored by the fine voice of Rowat on the standard “Just in Time.” The show has another standard in “The Party’s Over.”

In the patois of another era Ella is the young woman with a heart of gold who can fix everyone’s life but her own. One that she touched is the schlumpy dentist Dr. Kitchell (James Ludwig) who would rather be a songwriter. Hilariously at her urging he is born again as an over the top nightclub entertainer in the thoroughly rousing “The Modest Touch.”

Give credit to artistic director Kate Maguire to trust in a promising young director Ethan Heard. He has kept the pace as fast as possible breathing life into a hit from yesterday. A successful run of Bells Are Ringing bodes well for expanded use of the Colonial for more than just one summer musical. It is a beautiful but as yet under used, fine old theatre in once prosperous downtown Pittsfield in the heart of Berkshire County.