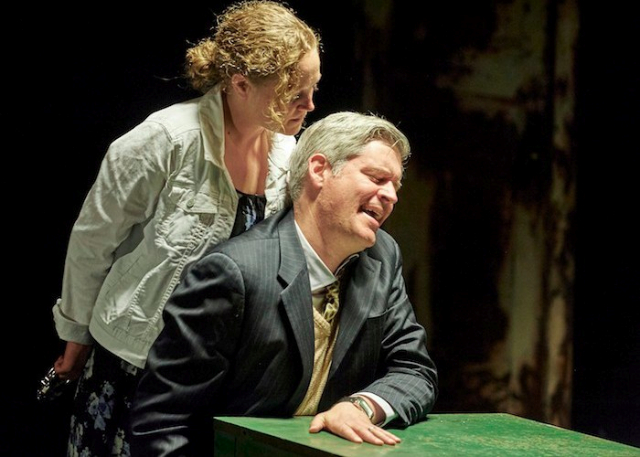 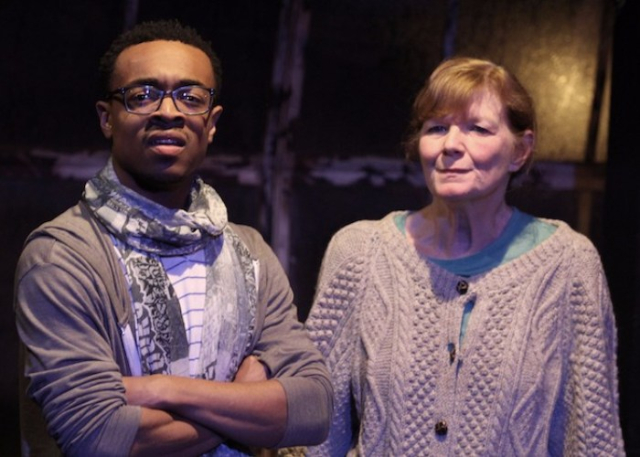 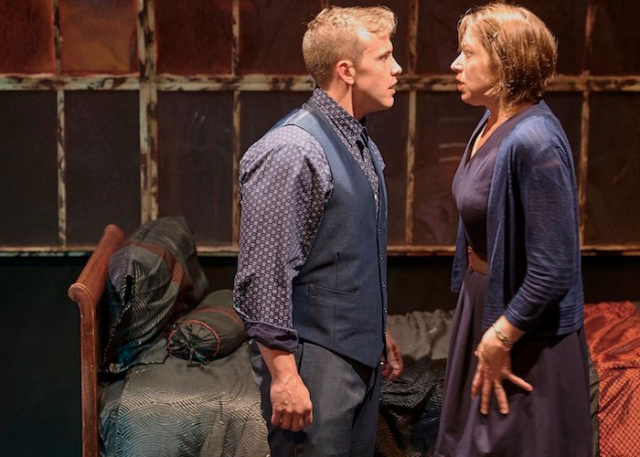 Frieda, an Englishwoman of indeterminate age, is one of the links among the three parts of Wastwater, a new play by English playwright Simon Stephens in its U.S. premiere at Steep Theatre. Frieda (Melissa Riemer) and Harry (Joel Boyd) are saying farewell before he leaves for a new life in Canada. As they watch planes take off in the night sky, Thomas Dixon’s sound design reminds you why people who live near O’Hare complain about the noise.

Frieda advises Harry what he should be careful about and tells him she’ll miss him. She obviously cares about him. But their relationship is ambiguous—Is she mother, aunt, friend?—until eventually we decipher that she has been his foster mother, and probably a good example of that role.

She had a similar relationship with Sian in part 3, whose life does not reflect Frieda’s gentle style. Another link is a young person’s death, which affected characters in two of the stories. And “Habanera” from Bizet’s Carmen is sung by two of the characters.

Wastwater is a loosely connected trilogy of stories, skillfully directed by Robin Witt. They’re set near London’s Heathrow Airport, where the village of Sipson is threatened with obliteration for the sake of a new airport runway. (The play’s title refers to Wastwater Lake in the Lake District, three miles long and the deepest lake in England.) Although the stories have suggestions of climate change and globalization, they are basically stories of human frailty, tragedy, failed relationships and the consequence of choices.

Stephens plots the stories of three couples in a deliciously ambiguous way. In each segment, he leaves us mystified for a while about the relationships between the female and male members of the couple.

In part 2, Lisa (Kendra Thulin) and Mark (Nick Horst) are having a flirtatious conversation in an airport hotel room, which seems to be leading to something more intimate. Then Lisa begins confessing to Mark many details of her past life, some of them scandalous, some criminal. Mark looks more and more horrified and we feel the sexual tension ebbing. But it returns.

In part 3, Sian (Carolyn Neff) is meeting with Jonathan (Peter Moore) to arrange a contractual relationship for him with a young Filipino girl. Sian reverses the usual power relationship to be brutal—physically and emotionally—to Jonathan. He succumbs to her every threat and demand and eventually we learn why.

Wastwater is well written, carefully plotted and very tense. There’s some comedy and some tragedy, exploration of human frailties and venality. The human connections are rare.

Sian says, near the end of part 3, “We’re nowhere near as atomized as people wish we were, you know? It’s like there are synapses. We’re connected. All of us. Just when you think we can’t possibly be, you realize that we are. It’s horrible.”

The cast of Wastwater is uniformly excellent and Robin Witt’s directorial experience is clear in the sharp pacing and characterizations. Joe Schermoly’s hangar-like scenic design works for the airport-area exterior, swank hotel room and a nondescript warehouse. Lighting is by Brandon Wardell and costumes by Emily McConnell.

Simon Stephens, an associate Steep playwright, will be in Chicago July 21-25 for several Steep events. He is best known for his Tony-winning adaptation, The Curious Incident of the Dog in the Night-Time. Steep has staged his plays Harper Regan, Motortown and Pornography. His plays Punk Rock, Port and On the Shore of the Wide World have been presented by Griffin Theatre.

Wastwater continues at Steep Theatre, 1115 W. Berwyn, through August 13. Running time is 100 minutes with no intermission. Performances are at 8pm Thursday-Saturday and 3pm on Sunday. Tickets are $35 for reserved seats and $25 general admission. Buy them online or by calling 866-811-4111.