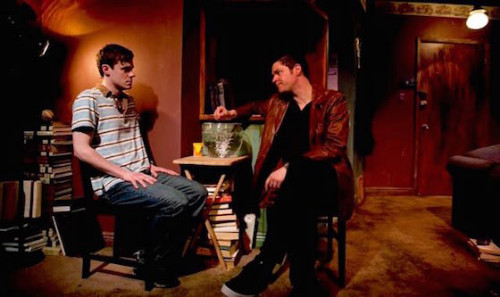 It starts out like a '70s British working class film, but it's set in 2010. The council flat is scruffy and so is its inhabitant, who is on the dole because of a disability. But it soon becomes clear that we're going to dive from social realism into sci-fi and fantasy, because Luke (Curtis Edward Jackson) is a genius and he's built a time machine.

Brilliant Adventures, the grim and grimly funny new Steep Theatre production, was written by Alistair McDowall and directed by Robin Witt. It was first performed in Manchester in 2011 and won the Bruntwood Prize for Playwriting. It is a deeply classist play that explores the lives of those who live in Middlesbrough, a failed industrial city on the River Tees in northeast England.

Luke is lying on a beat-up couch playing with a Gameboy as Greg (Brandon Rivera) arrives, having gone through a combat zone to reach Luke's flat. Greg says, "Scallies hoying bricks at us all the way there. They're all stood up in them crumbly houses opposite Pizza Zeus chucking bits of the buildings about. Fucking outrageous man. Using the buildings as weapons now."

Greg is unemployed but eager to find work. Any kind of work. He's got "Enthusiasm. Motivation. I want to climb the ladder. The ladder of business."

Luke's older brother Rob (Ryan McBride) comes in, with the Man (Will Kinnear), a demented junkie in rags who crawls on all fours, on a lead. (Although you may wonder at first if this is a man portraying a dog, it's not. It's the father of Luke and Rob.) Rob attaches the lead to a window ledge and checks out Luke's new flat.

Rob: It's not the sort of place someone like you should be living.

Rob: Someone like you. Someone who jumps at his own shadow. You'll have a fucking seizure if they knock on your window.

Rob: Course it is. It's fucking custom built. Window in the bog goes right out in the alley. Grilles on the front door, main window here overlooking the -- well, not the green.
The brown.... There's not anyone lives on this estate that isn't hooked on sommit.... Even the cameras can't get you, cos of the angle. It's perfect."

It's clear that Rob supports Luke, financially as well as emotionally. He's in the drug-dealing business, but he seems to be a good soul who looks after his brother and administers a biscuit and some affection to the Man. And he helps him shoot up.

Luke wants to live on his own so he can do his work. He sleeps on the living room floor so he can use the bedroom as his lab. The time machine sits in the corner of the set. It looks like a refrigerator crate on end, with a door hatch and cardboard dials and switches pasted and drawn on. He hasn't quite finished the maths and all, since it's a one-way machine. "He can't build one that gets you back, like. So if you go somewhere in it, you can't get back."

The character who further complicates the messy situation is Ben (Peter Moore), a man with money who turns out to be a gangster in good clothes. He's investing in Rob's drug-dealing business, so he has bought the flat upstairs from Luke's. Ben will stop at nothing to get what he wants, including buying Luke's time machine, which is not for sale.

At the beginning of act two, the Man appears, cleaned up smartly, to tell the story of the two brothers as children. His story involves two broken fingers and a fish bowl. Luke's fish bowl, home of the fish named Proust, is like Chekhov's gun. It will serve a purpose later, as will the time machine.

The cast list notes that Luke, the genius with a serious speech defect, is performed by both Curtis Edward Jackson and Ty Olwin. How does that work, actor-wise? Trust me. It does and we find out how in act two.

The acting by the six-man cast is strong throughout the play with Jackson/Olwin as Luke and McBride as Rob as standouts. Dan Stratton's scenic design effectively replicates the messy flat of a serious young man, with stacks of books, CDs and DVDs everywhere. Sound design and original music by Thomas Dixon includes the startling operation of the time machine. The notes from the director and dramaturg in the playbill do a good job of describing the Middlesbrough environment, past and present. The displays in the lobby include a glossary to the local dialect.

Brilliant Adventures runs two hours with one intermission. You can see it through August 15 at Steep Theatre, 1115 W. Berwyn (just east of the Berwyn Red Line station). Performances are Thursday-Saturday at 8pm and most Sundays at 3pm. Tickets at $10-35 can be bought online or by calling 866-811-4111.