Between Riverside and Crazy at Steppenwolf 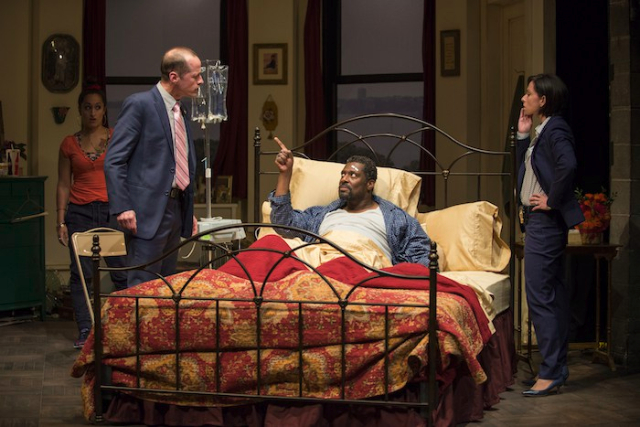 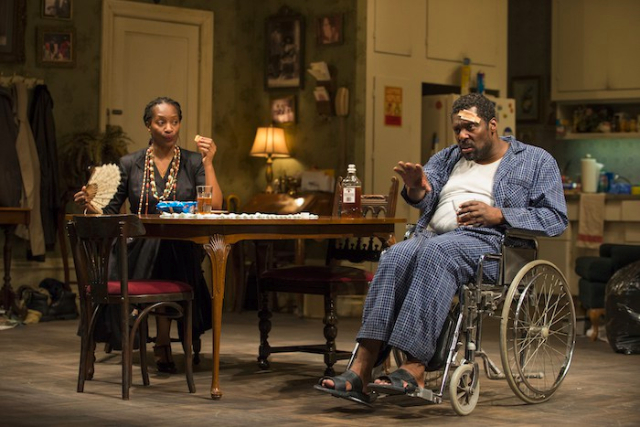 The setting was once a large and elegant apartment on Riverside Drive in Manhattan. There’s a spacious living room and a view of the Hudson River. The place has a cluttered, messy vibe, and the Christmas tree is still up in mid-summer. The apartment looks as if the real owner was away and squatters have moved in.

That’s the Riverside part of Between Riverside and Crazy, the wildly funny and poignant Stephen Adly Guirgis play that just opened at Steppenwolf Theatre.

The Crazy part? That would be the ménage of folks who live or hang out there. The patriarch is Pops (Walter Washington played by Eamonn Walker, star of “Chicago Fire” and distinguished British actor). He’s a retired cop, recently widowed. For years Pops has been pursuing a lawsuit against the NYPD for the injuries he suffered when he was shot six times by a rookie cop, who called him Nigger. At the time Pops was off duty, out of uniform and drinking at 6am in an after-hours club. He’s also trying to keep his rent-controlled apartment ($1500 a month), which the city would like to take away.

Also hanging out on Riverside is Pops’ son Junior (James Vincent Meredith), an ex-convict who runs a second-hand store specializing in hot merch out of his bedroom. His girlfriend Lulu (Elena Marisa Flores) lives there too, she waltzes around in minimal wear, may be an ex-sex worker and she’s pregnant. Lulu says to Pops, “I may look how I look—but that don’t mean I AM how I look!”

Another resident is Oswaldo, a young hustler and friend of Junior’s, played by Victor Almanzar, who played the same role in the New York production.

The idea of a black cop being shot by a white cop brings you sharply back to today’s realities, especially after a week haunted by white on black and black on white shootings. So despite the comic nature of Guirgis’ script, it is very much a story reflecting today’s racial climate. Pops says,

That night, Pops shows off his culinary skills. The guests are his former partner Detective O’Connor (Audrey Francis) and her fiancé Lieutenant Caro (Tim Hopper). By the end of the evening, it’s clear why they’re visiting. Caro tries to talk Pops into dropping his lawsuit and taking the settlement offered by the city, which would also protect Pops’ tenancy in the rent-controlled apartment. Pops won’t agree.

In act two, the Church Lady arrives, a visit Pops has been anticipating. Played by Lily Mojekwu, she’s a blend of Christian and voodoo and seems to know a lot about Pops and his life. She tries to convince Pops to take communion with her. He refuses at first and eventually succumbs in more than one way. This is a scene that will give you a whole new view of the communion wafer.

By the end, Pops has gone through a medical crisis, survives and is ready for the future. He has solved his problems creatively.

Between Riverside and Crazy is a rowdy, raunchy play with lots of action. (Sensitive ears alert: When I said raunchy, that’s what I meant.) Yasen Peyankov directs it with style and glee. Collette Pollard’s scenic design picks up the characteristics of decayed, messy life in a Riverside Drive apartment, which also has a roof deck, the second level of the set. (She and Peyankov visited Guirgis in his own Riverside Drive apartment. Photos of that visit are shown in the playbill.)

The performances are generally excellent. Walker as Pops is big and brash, if slightly broken by his experiences. (He was memorable as Howlin’ Wolf in the 2008 film, “Cadillac Records.”) Flores as Lulu is sexy and silly. And Mojekwu as the Church Lady is priceless. My only complaint about the performances is that occasionally some of the characters (even Walker, who has a big voice) were too soft spoken. In lowering their voices for a private conversation, they spoke in a whisper, rather than a stage whisper.

Playwright Guirgis is getting plenty of attention in Chicago this season. Eclipse Theatre, which chooses one playwright per season, is staging three Guirgis works. Our Lady of 121st Street is up now and they previously staged Jesus Hopped the A Train and will finish the season with The Little Flower of East Orange in November. Steppenwolf produced his play, The Motherfucker with the Hat, in 2012-13.

Between Riverside and Crazy continues at Steppenwolf Theatre, 1650 N. Halsted, through August 21. Running time is 2 hours, 20 minutes, with one intermission. Performances are Tuesday-Sunday. Tickets for $20-89 can be bought online or by calling 312-335-1650.