The Whipping Man at Vermont's Dorset 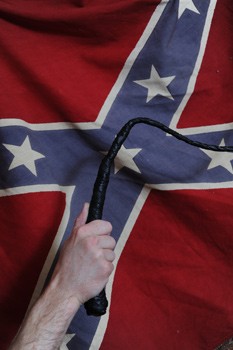 Powerful imagery in The Whipping Man. 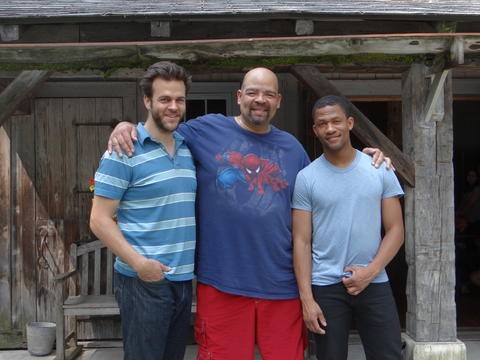 The Whipping Man, playing at the Dorset Theatre Festival, is a profound and moving theatrical experience that lingers long after the final curtain.

Until I saw The Whipping Man I had never considered the possibility of Jews owning slaves in the South. I was also completely unaware of the fact that Lincoln's death on April 15, 1865, six days after Lee surrendered to Grant at Appomattox, was on the fifth day of Passover, the Jewish celebration of Moses leading the Hebrews out of Egypt, out of slavery.

In his powerful and evocative historical play The Whipping Man, playwright Matthew Lopez makes use of these uncanny and significant parallels to illuminate the depth of the divide between three men who have shared a home and a religion, but never a life.

The play is set in the remains of a Southern home during those astonishing days at the end of the Civil War. Caleb, a wounded Jewish Confederate soldier returns home to find two former slaves, Simon and John, who were members of his household, to be the only occupants of the house. In the days that follow, Simon, a wise, warm, and upright man, tends to Caleb's wounds "because it is the right thing to do" while John "liberates" the necessities of life along with some luxuries that he fancies from the surrounding abandoned homes. As the action progresses each man reveals the secrets of his past, secrets that have affected each of the others.

The three men, who have been raised in the Jewish faith, prepare for and observe a Passover seder, the prayers and ritual that celebrate liberation carrying profoundly different meanings for each of them. The juxtaposing of the prayers of Passover with the liberation of the slaves in the American South is as tremendously moving as it is jolting. Simon ponders the fact that Jews kept slaves though as a people they had been slaves. He asks, "Are we Jews, or are we slaves?" We are left to wonder how any people could have reconciled owning slaves when their most holy celebration was of their own release from bondage.

Brian Anthony Wilson infuses his Simon with a quiet strength and depth of character. He has an easy smile and the shambling gait of advancing years, but when the need arises, the vigor of a powerful man. His superb performance is not so much acting as being.

Calvin Dutton plays John with an authentic nervous energy, a man of intelligence whose spirit has balked and thrashed against the constraints of his life, a man forcibly controlled by others, who has never found peace or meaning in his own life, a man who has the intelligence to know that he is lost but not the emotional stability to alter his path or even to accept responsibility for his actions.

Caleb, played convincingly by Michael Simpson, is more of a boy than a man who does not have enough self-awareness to recognize that he has always been taken care of by others while exercising power over them.

Director Dina Janis's production is evocative and stirring. The blocking, pace, and level of intensity are unhurried and natural, allowing the play and the characters to speak for themselves.

The set and lighting work beautifully. The wartime damage to the house is realistic and heightened by the lighting, especially the sunlight streaming through a hole in the roof. The lighting convincingly mimics the golden light from lamps and candles of the day.

The Whipping Man infuses that grim period in our history with humanity, with the reality of the human consequences of slavery that reverberate even today. It reminds us how blind we can be to our own injustices and to the limits of our understanding of the disparate levels of our modern society. When Simon speaks to Caleb of faith he says, "You don't lose your faith by not getting answers. You lose your faith by not asking questions." That sentiment is just as true of art. The Whipping Man, gives us no answers but leaves us asking questions of ourselves.