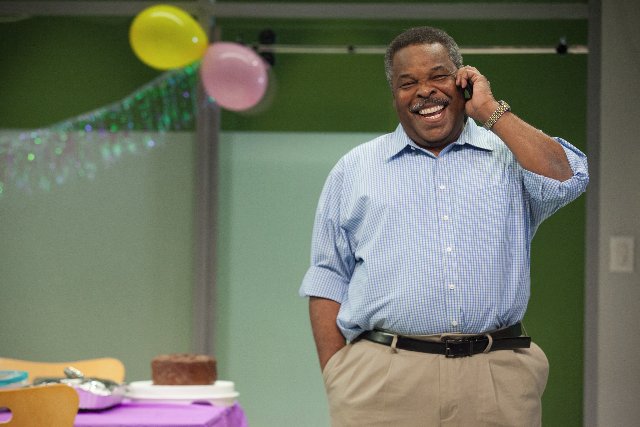 Arrtney Jackson (Ray Anthony Thomas) looks on the bright side. 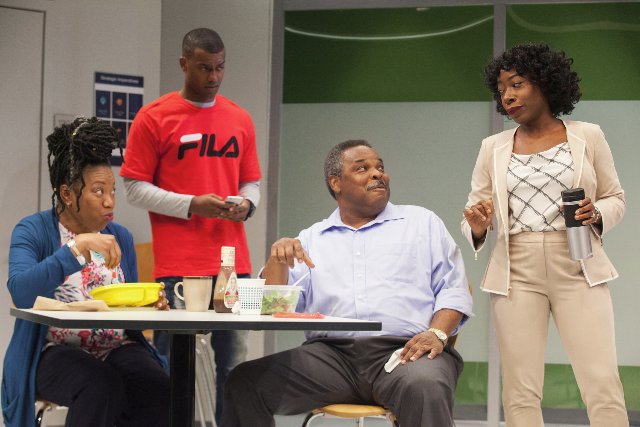 Conflict in the break room.

The 2008 season of Williamstown Theatre Festival featured an African American themed play "Broke-Ology" by Nathan Louis Jackson. It featured Wendell Pierce who returned in 2016 with the harrowing play “Cost of Living.”

A decade ago, I discussed the significance of “Broke-Ology” with then artistic director, Nicholas Martin. During his tenure the program was balanced between traditional and contemporary theatre. He spoke of the importance of finding new voices in the mix. At the time it was a toe in the water but a harbinger of change.

That continued under Jenny Gersten and ever more so under Mandy Greenfield. Under her current leadership diversity and intersectionality has become a mandate. Her programming has been a standard bearer for social and political changes that are at the epicenter of progressive American theatre. It is a paradigm shift in social justice theatre that we haven’t seen since the Great Depression and  WPA.

There are similarities of causality but with far more nuance and sophistication of messaging. Compare current theater to, for example, the provocative “Waiting for Lefty” (1935) by Clifford Odetts or the plays of William Saroyan or Paddy Chayevsky. A mandate of the HUAC hearings, led by Senator Joseph McCarthy, was to root out the red menace that invaded Hollywood.

The radical theatre and film of the era of Depression and post war McCarthyism was rooted in Marxist social realism. The new progressive theatre has a broader spectrum in issues of gender and racial identity. Recently, delegates at a theatre conference in St. Louis  shouted “Yellow Face” during a performance. All too typically a Caucasian actor performed as an Asian.

That miscasting has been embedded from Madam Butterfly to Sidney Toler playing the popular movie detective Charlie Chan and Yul Brynner in The King and I.

Greenfield’s production of Cost of Living had a successful Off Broadway run with award nominations and a Pulitzer Prize for Martyna Majok. The play focused on the relationships of a female double amputee, a severely disabled man, and their care providers.

Continued in that now established tradition this season features Artney Jackson, by James Anthony Tyler, directed by Laura Savia. The comedy is titled for its main character a portly, sixty-something, warm and fuzzy, working stiff played aptly and affectionately by Ray Anthony Thomas.

The radical development of this African American play is that it is charming, amusing and disarmingly benign. There is no heavy lifting with in your face social and political issues. It’s less about burn baby burn and more like a flashback to The Cosby Show.

Progress, as I struggle to understand it, means the right to create entertaining theatre-light. With fewer calories, so to speak, it is easier to digest.

Pinch and cuss me out if I’m wrong but sitting in the Nikos Stage, the cauldron of radical theatre, I kept waiting for the shoe to drop. That never happened. Rather, the conflicts of individual characters and their collective issues and challenges, resolved with a series of happy endings. This included a heart warming ending. Alone on stage, having been turned down for a promotion, Artney finally makes the call for a U Haul.

That was a request from his 30-year-old, bi-polar son A.J. (Michael Braugher). This father/son tension prevailed from first to last scenes in the 90-minute, one act play. The man/ child has been off his meds, with devastating results, 14 times. In one incident he ran out of the house brandishing a knife. With no other choice his father called the cops and then hoped and prayed that he wouldn’t be killed.

The son wants to make a break from his father’s resented control. It’s about tough love which is difficult for them to respect and understand. On his own, if off his meds, Artney won’t be there to protect him.

The play unfolds in a generic, corporate break room. It has been crisply designed by Emilio Sosa with pervasive bright light by Isabella Byrd. The workers negotiate often contentious calls from cable clients complaining about rate increases particularly when introductory deals expire. We have all had that experience and negotiate them with varying degrees of frustration and anger. The norm is to kill the messenger.

It’s stressful work with poor wages and they are about to face a setback of benefits. That’s been concealed from them by about to retire team manager Rhonda Simpson (Alfie Fuller).

She’s black like her crew but, resentfully, they feel she acts like she’s white. There are questions about the ethnicity of her new husband. Based on phone images he looks white but in fact is Mexican.

The gag is that they will organize a party with soul food as a sendoff. There are jokes about that.

Portia (jackie Zimmer), who has symptoms of serious illness, can't afford to take sick time even to be diagnosed. Her husband is out of work and they are falling behind on her slim paycheck. She can't afford to loose a job even if it kills her. This is a revealing comment on the greed and brutality of corporate America. The audience is provoked to consider if it is any different from slavery.

After paying bills Artney informs us that he has $200 a month to live on. The company intends to stop paying health insurance (part of the consequence of assaults on Obamacare) and workers face being charged $400 a month. Rhetorically, Artney asks how are they going to do that? It's a question, against Rhonda's advice, that he intends to bring up during his interview.

If Artney gets her job, as management, will he act white or remain black and fight for the crew he has worked with. He has some 25 years of seniority.

The older workers on tight budgets like Artney and Portia pack lunch and eat out of Tupperware containers. The young bucks, college educated Zaahir Baldwin (Christopher Livingston), and his handsome, proletariat sidekick, Perhkins Howard (Joshua Boone), like to slip off for a Big Mac and fries. Perkins pesters Zaahir for his sister’s phone number.

Perhaps a weakness of the play is that all of the workers are black. It is set in Vegas and accordingly that uniformity is less likely than a location in Detroit, NY, Chicago or LA. A bit of diversity, perhaps Asian, Latin American, or Eastern European might have led to more varied and interesting interaction.

Here the dichotomy is literally black and white. It is white management exploiting the labor of workers of color. Even the black, female manager is caught up in that we vs. them dialogue. When pressed she discloses how, behind closed doors, she has fought for the workers.

When, to the disappoint of her team, she discloses that Artney doesn’t get the job she says something interesting. Management has gone outside for the hire. Rhonda states that she’s “a sister” but hilariously adds that “she thinks she’s white.”

While an enjoyable afternoon of theatre we left with not that much to mull over. Perhaps that’s progress.

Let’s look at that from another vantage point.

Today’s Sunday Times arts section has a feature on changes regarding First Nation artists in Canadian Museums. The Art Gallery of Canada, for example, will devote a third of the exhibition space to its native collections.

By contrast, the Whitney Museum ran into a firestorm when too rarely in its program it focused on a Native American artist. There was blowback for the retrospective by Jimmie Durham a self identified but non enrolled Cherokee.

“Kay WalkingStick, a citizen of the Cherokee Nation, said that she has seen progress in the art world since she arrived in New York in 1960 (she is now based in Pennsylvania).

“My goal was to open up the mainstream to Native American art,’ said Ms. WalkingStick, 83. ‘And it has absolutely gotten better.’ The biggest breakthrough, she added, was getting past the expectation that ‘Indian artists made art about being Indian.”

Reconfigured that might be applied to the playwright James Anthony Tyler.

WalkingStick’s statement is a signifier of progress, but may also be taken as a potent indicator of the tough road and hard work that lays ahead for all of us.