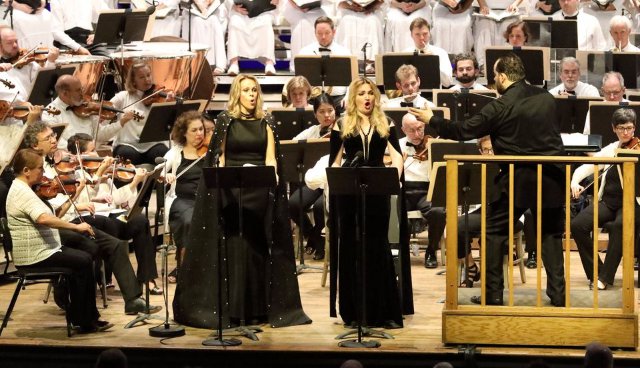 The Messa da Requiem is a musical setting of the Catholic funeral mass (Requiem) for four soloists, double choir and orchestra by Giuseppe Verdi. It was composed in memory of Alessandro Manzoni, an Italian poet and novelist whom Verdi admired. The first performance, at the San Marco church in Milan on 22 May 1874, marked the first anniversary of Manzoni's death.

It was a particularly spectacular selection for the occasion of the annual Gala which was held for patrons and friends on Saturday night at Tanglewood. For their elegant attire it was easy to spot the VIPs in the crowded Koussevitzky Music Shed.

The sense of anticipation was palpable as we braced ourselves for the massive work in which Verdi brilliantly conflated ecclesiastical and liturgical with a dramatic, sweeping operatic reach.

At the time of its composition it was forbidden for women in a church to perform in a Catholic ritual. From its inception, however, Verdi intended to have two sopranos and two male voices.

Nelson’s was particularly attentive in passages that featured his former wife soprano Kristine Opolais. She soloed and paired with mezzo-soprano Oksana Volkova. While Opolais was mostly heard over Volkova there was the overwhelming factor of a double chorus. The range of the work entails passages as soft as a whisper-difficult to achieve in the open space of the Shed- then thunderous and apocalyptic.

In the range of the work Verdi, who was not notably devout, explored every aspect of heaven and hell. The unleashing of “Dies irae” was ravishingly furious with the percussionist attacking an enormous drum. It is one of the great moments in music of the era.

While the two women commanded attention the male singers enjoyed triumphant moments. Tenor Jonathan Tetelman’s was powerful with “Ingemisco.” There was particular interest in hearing the much discussed bass-baritone Ryan Speedo Green. His rendering of “Mors stupebit” was stupendous.

When he first came to the BSO Nelson’s was scheduled to perform the Verdi Requiem. Because of a concussion he was not allowed to travel. It was wonderful to hear him at last conduct an iconic work which conveys the strengths of his approach with its particular nuances for voice.

There was a long pause at the end of the piece. Nelsons appeared to be frozen in a trance. The music was clearly overwhelming for him. Eventually he turned to the audience to thunderous applause. It will long be remembered as a great Tanglewood moment.