With Jim Hall and David Finck in Seiji Ozawa Hall 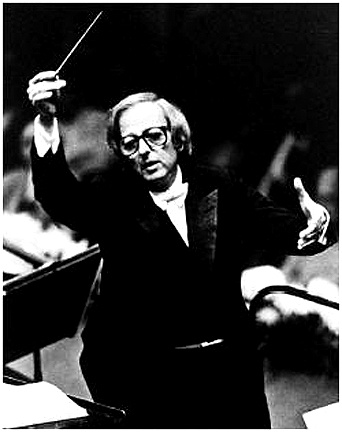 Andre Previn in his familiar role as conductor of symhony orchestras. 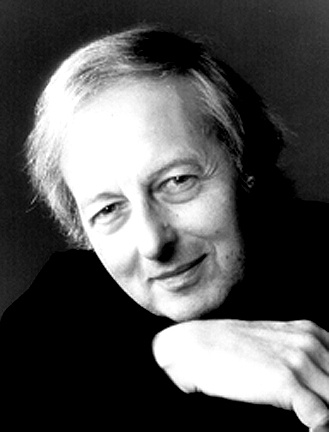 Previn revealed another side as a jazz improviser. 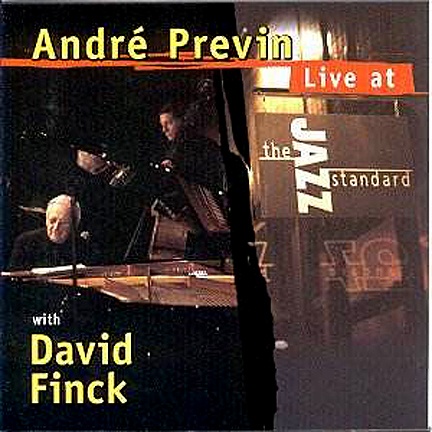 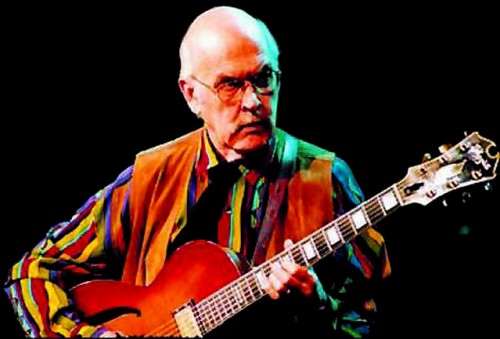 The distinguished guitarist, Jim Hall, joined Previn for a night of jazz. 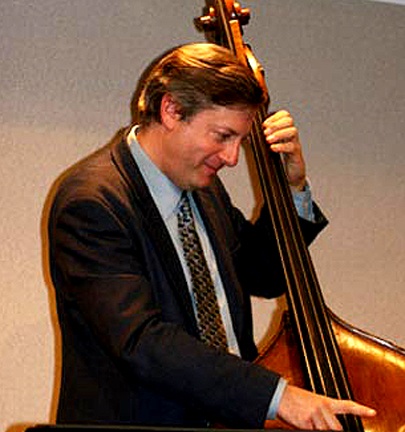 The Andre Previn Jazz Trio? Surely this was an opportunity not to be missed. On July 8 and again on July 13 Previn was in a familiar role as guest conductor in the Koussevitzky Shed at Tanglewood.  He led the Boston Symphony Orchestra through works by Tchaikovsky, Rachmaninoff, Prokofiev, Mozart, Haydn and Ravel.

Last night, in the more intimate setting of  Seiji Ozawa Hall, with its rich use of wood for seating and wall paneling providing an impeccable space to hear chamber music, Previn, a small man and now appearing a bit frail at 76, walked on stage wearing a loose black shirt. His attire was a metaphor for the fact that we was dressing down from the genre of 'serious music' for a relaxed evening of  improvisation on a state of the art, grand piano, which was more than "good enough for jazz." He was accompanied by his long term collaborator, the tall and agile bass player, David Finck, and on this special occasion the veteran jazz guitarist, Jim Hall.

Without introduction they opened with a long vamp, some fifteen or twenty minute improvisation that eventually revealed itself to be changes on the theme of George Gershwin's 1924 standard "Lady Be Good." One particularly recalls the interpretations of it by vocalist, Ella Fitzgerald.  This would establish the premise of the evening in which the trio largely expanded on the theme of standards, some of which were to varying degrees barely recognizable. The primary intent appeared to be to reveal the impeccable and fluid chops of Previn as a pianist with a light and deft touch, He appears to play within the influence of the Harlem Stride tradition which later spawned the virtuosity of such great artists as Art Tatum, the fastest hands of any jazz pianist and its most subtle improviser, and the masterful mannerism of Oscar Peterson. It is not surprising that Previn as a jazz artist gravitates to the aspects that most emphasize technique and musicianship arguably at the expense of passion, funk and soul.

After the opener Previn took up a microphone and chatted with the sold out mostly senior audience. "It took a while to get there but that was Gershwin's 'Lady Be Good' and we would like to follow with another Gershwin tune," he said. He commented on how wonderful it was to be back at Ozawa Hall with his long time accompanist David Fink with whom he has recorded several CDs. He recalled using the space to perform chamber music and record a cello sonata with Yo Yo Ma. "The hall was so busy that the only time we could record was from midnight to 5 AM. After that we had breakfast and went to bed just as everyone was getting up to go to work."

Following the rendering of "But Not for Me" he again chatted with the audience. "The gap between 'serious music' and jazz is getting smaller all the time," Previn said. "Both Jim and David have studied extensively at the conservatory and Jim recently sent to me something he has written which is quite fine. Some time back I was conducting a big Bartok work and Shelly Mann who was in the audience came back stage after the performance. He was not familiar with the piece but loved it. I introduced him to the orchestra manager who said to him 'I didn't think that people like you liked this kind of music.' To which Shelly responded 'That's not true, big bands are coming back.'"

There was a generous sharing of solo time. Hall performed two solos as did Previn. Although, he didn't solo as such, there was also an extended showcase of Fink's superb and melodic playing on the bridge of several tunes. In the solos Hall proved to be an especially soft, sensitive lyrical interpreter. He was also just perfect and impeccable when stepping back and providing rhythm and chords which were percussive but barely audible during Previn's improvisations. Their playing was tasteful and respectful. Perhaps too much so. One would have liked another featured instrument to complement and push the trio. In this instance the conversation was too intimate and refined so none of the musicians appeared to stretch out or get into a groove.

Previn was best when he performed "My Funny Valentine" unaccompanied. Here he was most literal in conveying the melody of the song. One could almost sing along, as annoyingly, the gentleman seated next to me insisted on doing rather badly on several occasions. Of course not recognizing the tune is nothing new. That happened in general in jazz in the 60s. The cats used to dig grooving on those Trane sets which stretched one song out for forty five minutes or so. I remember Trane more or less going out for a beer leaving Jimmy Garrison on stage sweating and digging through a bass improvisation. So Previn and his trio were entrenched within a comfortable tradition. But now and then we caught phrases of "I Got Rhythm" "You Came to Me From Out of Nowhere" or "Someone to Watch over Me."

Although Previn spoke positively about the fact that today the boundaries are blurred between jazz and serious music that is also problematic. While Previn's performance was technically perfect it was also undistinguished and not particularly compelling. It lacked personality, signature and style. Given a blind fold test it would be hard to identify his playing from an array of other accomplished contemporary players none of whom have the star power to sell out Ozawa Hall. Today Jazz is dead and survives as an archival, academic ghost of the past. Sorry, but I just don't buy into the myth of the genius of Wynton Marsalis or the endless graduates of conservatories and Berklee College of Music.

Some may view it as progress that jazz is now heard at festivals and the great symphony halls of the world. But it is a different context from the basement dives and juke joints where the music was the expression of the lives of its artists. The playing conveyed the life and times of the musicians. When Miles stuck the mute in his horn and played a standard like "My Funny Valentine" it tugged at your heart and brought sobs and tears as it dug deep into your soul to dark corners where only the greatest artists dare to penetrate. While Previn's playing of that music just evokes polite applause. Hey man, there is a difference, with all due respect, huge.