Revival of 2004 Collaboration with The Boston Camerata. 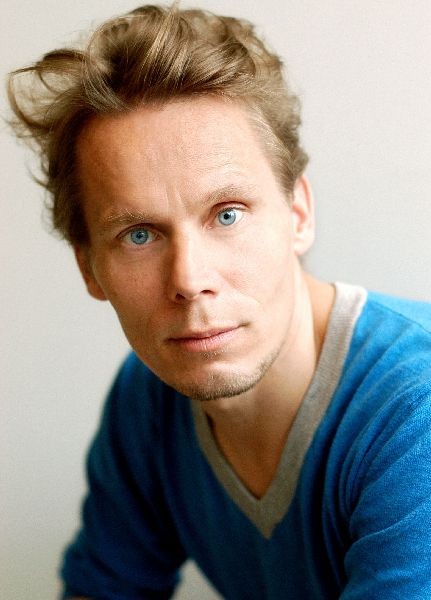 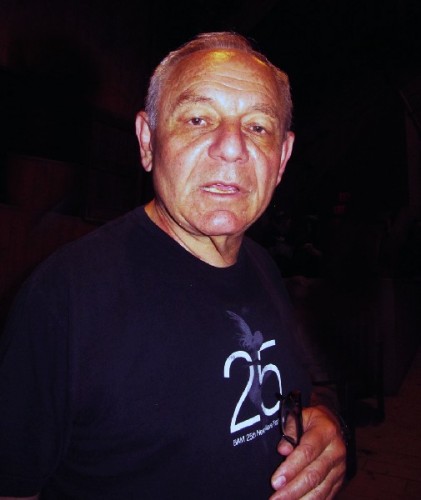 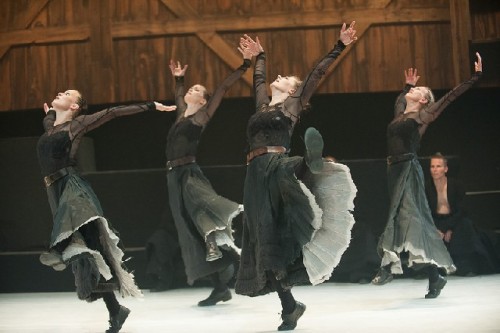 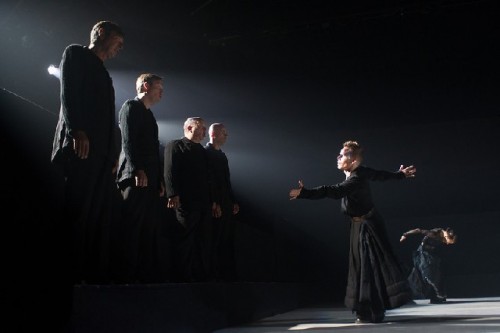 A singer sets the mood for the dance. 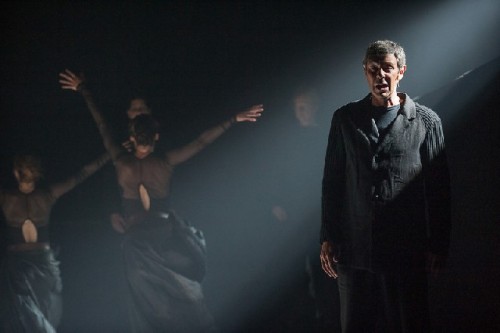 Effective use of the Camerata singers. 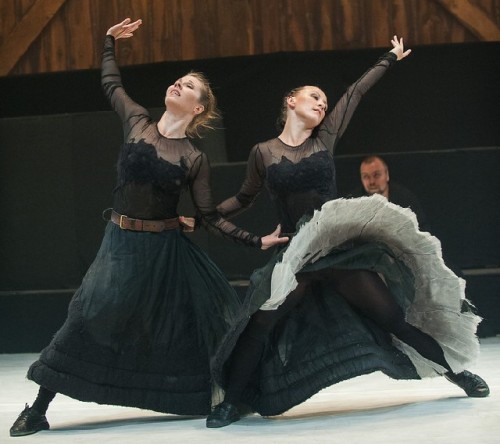 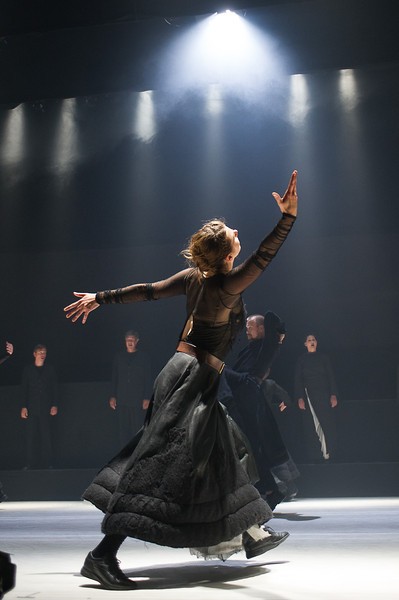 The United Society of Believers in Christ’s Second Appearing (USBCSA) was founded in 1747.  Because of being seized by the love of God during ecstatic communal celebrations they became more commonly known as The Shakers.

They were notable for regarding men and women as separate but equal. Mostly the sect was led by women. Jane Wardley was the sect’s first leader. Ann Lee assumed leadership after she joined in 1758. She lost four infants which led her to renouncing the perceived curse of the Original Sin of Adam and Eve.

She experienced numerous revelations in her role as the “Mother of the new creation.” Lee preached that members of the sect confess their sins, give up worldly goods, and adhere to celibacy. The sect emigrated to America “singing and dancing, shaking and shouting, speaking with new tongues and prophesying, with all those various gifts of the Holy Ghost known in the primitive church.”

In 1774 Lee led her followers from England to America initially settling in New York State. Eventually, twenty communities were formed with a peak membership of 20,000. They endentured children, adopted orphans, and harbored former slaves.

Because they did not reproduce they depended upon converts and orphans. Their livelihood was based on farming, selling seeds, and crafts. The cheap goods of the Industrial Revolution and mechanized agriculture lessened the demand for their more expensive produce, furniture and crafts. States passed laws restricting adoption by religious groups.

For a variety of reasons membership dwindled and eventually the group opted not to accept new members. By 2011 their numbers were reduced to just five at Sabbathday Lake in Maine.

In 1998 the Institute of Contemporary Art, Boston organized a remarkable exhibition. For The Quiet in the Land a number of artists were residents at Sabbathday Lake. They participated in all activities of the members while respecting their rituals and privacy. While in residence they lived separately as men and women, participating in communal meals and kitchen duties. The exhibition displayed works created during the residences. It was exciting when the members of the group came to Boston for the opening celebrations.

In the Berkshires we have the wonderful Hancock Shaker Village. The remarkable buildings, including the round, stone barn are open to visitors. There is a small museum with special exhibitions.

The Shakers were remarkable for combining form and function. Their designs were very efficient with an emphasis on clean, simple lines that sublimely parallel the minimalist reductions of modernism. Vintage Shaker pieces command top prices when they come to market. There is an industry of reproductions.

The stunning, 71 minute dance Borrowed Light, a collaboration between choreographer Tero Saarinen and Early Music devotee and arranger, Joel Cohen, offers vivid testimony to their legacy and inspiration conflating simplicity and austerity with power and passion.

While waiting for yesterday’s performance, a triumphant return to Jacob’s Pillow following its 2006 U.S. premiere, I spotted and engaged in conversation with Joel Cohen. While an undergraduate at Brandeis he introduced me to performances of early music in the remarkable programming of the Spingold Theatre. I reminded him that the first time I had heard the lute performed he was playing the instrument. He was an instructor at Brandeis in its renowned music department which had been founded by Leonard Bernstein. Cohen went on to found The Boston Camerata.

The collaboration that resulted in this riveting dance occurred serendipitously. Saarinen came upon a CD of Camerata performing unaccompanied Shaker music in 2002. The music and dance companies rehearsed together for only a week prior to the world premiere in France in 2004. The response to the Pillow performance in 2006 was so phenomenal that the dance was brought back to be a key element of the 80th Anniversary Season. The wild standing ovation with shouts of “Bravo” and heavy stomping feet was both surprising and disorienting.

The moody, evocative, complex yet simple, sensual and repressive, multi valent performance had gotten deeply into me. It was one of those classic ‘I vant to be alone’ moments of intimate privacy. To linger and absorb such a complex experience. That audience cacophony was an unwelcome jolt of reality. Imagine, for example, parishioners bursting to their feet with bravos after the completion of Christmas Eve or Easter High Mass.

For me, consider the source, the experience of this great work of art was more religious than secular. For those compelling 71 minutes it brought me dizzingly close to the God which my mind does not believe in. If those ten dancers and nine singers can fly that close to the sun than who I am to say that the wings melted during that torrent of applause.

While true to the spirit and intentionality of the Shakers all of the resources of past and present converged in a work that felt both rooted in tradition and yet boldly fresh, experimental, and contemporary. It cut deep beyond the surface of music and dance, sound and movement, to plunge into the heart and essence of Shaker mysticism and spirituality.

Rarely have we seen a more completely realized work of art on stage at Jacob’s Pillow.

It began in silence with raking light in a foggy, humid space focused on the slow, deliberate, physically wrenching, obsessed from within movement of a single female dancer, Sini Länsivuori. There were foot stomps and hand clapping that thundered through the space. Calling the group to prayer Anne Azema sang “In Yonder Valley.”

There were many subtle changes in the program of 22 “songs.” Some of these had lyrics while others were chanted in vocalese. Until this dance premiered much of the material had never been heard outside of the community. Cohen was given permission to transcribe and arrange works from treasured archives.

Given the celibacy as a core belief I had anticipated a strict separation of the men and women. For the most part this was true. The four women alternated with the four men. At times they all danced together often in a very physical, boisterous, manner. When seized by the spirit of the Lord, my friends, that’s a pretty incredible phenomenon. God does not come creeping and whispering into our hearts and minds. God comes with a might thump of hand clapping and foot stomping.

The very robust dance movements, with harsh angles, twists and turns, were emphasized  by the spectacular costumes designed by Erika Turunen. Rarely have they been a more integral part of the performance. The women wore sheer, long sleeved, black tops over very full, padded black skirts, over pants. The men looked similar but different with long, skirt like, black tunics with no shirts. At times we were shocked by skin. The occasional bare upper bodies of a couple of grappling, combative men and voyeurist glimpses of flesh in an oval section of the backs of the women.

On many levels the dancing of the men and women were presented as equals. It was not an occasion of here are the four men and now the four women. There was no overt differentiation of the sexes. One woman was by far the tallest and most imposing individual on stage. You were constantly drawn to her although only once did she perform apart from the ensemble.

Given the central concept of celibacy there was an enormous sexual tension and energy in the dance. That was surely a struggle for the community and why so many left the sect. We know all too well how that does and doesn’t work. Consider the mess, for example, in the Catholic Church. The special tension of the Shakers came from men and women living and working together. Perhaps, secretly, exchanging longing looks but forbidden to act on those very human impulses.

The choreography explored the many dimensions of lines as well as circles. At times the nine singers joined the eight dancers. This also included climbing over the horizontal, stacked, black cubes which simulated a meeting house. When the masterful lighting design and set design by Mikki Kunttu illuminated the entire stage we were able to see the hand hewn, how Shaker like, back walls of the rustic theatre.

It is daunting today to try to evoke the unique and shattering, shaking spirituality of that experience. A day later and a dollar short I am sinking back into my usual agnosticism.

But for those 71 minutes yesterday, good grief, I was so close.